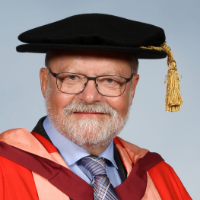 Professor Peter Landrock is a pure mathematician turned entrepreneur, using mathematics at the core of his business. The company that he founded has played a major part in creating the modern ways in which we carry out financial transactions.

It seems lots of you trust this new technology! But have you wondered how your phone or bank card can allow you and nobody else to make a payment from your account? The answer lies in cryptographic authentication.

One of the oldest authentication technologies is the physical lock and key. For a bank card the lock and the key are both in digital form. The lock is your card’s public key, a long sequence of zeros and ones stored in the bank’s database. The corresponding private key is stored only in your card’s chip. When you authorize a payment, that chip digitally signs the transaction. This means it calculates another long binary string that proves the card is authentic and proves that you agreed to that particular transaction. Without the private key it’s impossible to produce a valid signature. Your bank uses the public key to check the digital signature before they authorise the payment. More layers of cryptography make sure that you, the bank, and the shopkeeper are protected from fraud, and that your transaction remains private. Perhaps you already know that all of this cryptography relies on a branch of mathematics called number theory.

You can’t learn any useful information about the private key even if you know the public key and see as many digital signatures as you like. This idea is taken further, from practical impossibility to mathematical impossibility, in the concept of zero-knowledge authentication. This is an area in which Peter Landrock has made important theoretical contributions.

There is a big gap between the beautiful mathematical ideas that make cryptographic authentication possible, and its implementation as a seamless part our everyday lives. Peter Landrock has made a great contribution to bridging this gap.

Peter earned his PhD in 1974 in a branch of algebra called group theory, at the University of Chicago. He was the last PhD student of the great algebraist Richard Brauer. Peter says that he reciprocated the favour of advising him by disproving one of Brauer’s best known conjectures!  Peter returned to Aarhus University in his native Denmark, soon becoming a professor and continuing his research in group theory. After a year at the Institute for Advanced Study in Princeton, in 1983 he returned to Denmark with an Apple 2e computer and began to move his research into mathematical cryptography. That field had just been revolutionized by applications of number theory. Peter quickly built up one of the leading academic data security research teams in Europe.

In 1986 Peter began to translate what he was teaching and researching into practice. He hired a minibus and drove around Europe with a group of his students, visiting companies and universities that were doing research and development of practical electronic cryptography. Some Copenhagen banks asked Peter for help, so he formed a consulting company with two of his students, Ivan Damgård and Jørgen Brandt. Peter thought of calling the company Cryptomatic, but couldn’t resist adding an “h” to make “Cryptomathic”. They were ahead of their time: this was three years before the invention of the World Wide Web, and well before online shopping or banking. For the next decade Peter built his business, and published extensively on various practical aspects of cryptography, particularly key management and authentication. He served as President of the International Association for Cryptologic Research from 1992 to 1995. By 1996 the digital revolution was underway and Peter decided to leave academia to concentrate on his company.

Cryptomathic was one of the first companies in the world to commercialize modern cryptographic algorithms. The company’s products include the cryptography on chip and pin and contactless payment cards, electronic passports, secure servers and key management systems for large banks, and cryptography for electronic voting systems. Cryptomathic is still a fairly small company but its technology is found in billions of mobile phones and its algorithms are used to create hundreds of millions of bank cards each year.

One focus of the School of Computer Science here at the University of Bristol is data security and practical cryptography. A few years ago some of our academics collaborated with Peter’s employees at Cryptomathic to study protocols for hardware security modules. Probably some of today’s graduates will embark on careers in cybersecurity, a word not yet coined when Peter began his business career 33 years ago.

When Peter Landrock was nominated for lifelong achievements in cryptographic techniques at the 2010 European Inventor of the Year Award, he wrote that he was “slightly troubled by that nomination as it might be interpreted as a hint that it was about time to retire – which is frankly out of the question”.  Sure enough, Peter remains active as President and Executive Chairman of Cryptomathic, driving his company to keep innovating. Peter still teaches, and he sits on the board of the Newton Gateway to Mathematics, an organisation that helps today’s mathematicians to turn the work into real world impact on the UK’s industry, business and government. Peter is an excellent example to follow if you want to apply what you have learned in your studies to change the world.

Pro Vice-Chancellor, I present to you Peter Landrock as eminently worthy of the degree of Doctor of Science honoris causa.