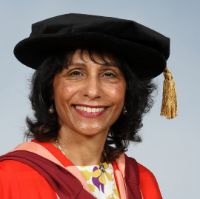 It is an extraordinary privilege and pleasure to celebrate the work of Kalpna Woolf. Kalpna’s story tells of a profound belief in human desire for progress and good. She champions determination, unswerving focus and unstinting service to caring for others and the world we live in. She stands for utter commitment to transformative and inspirational change and no end of entrepreneurial insight and flair. She is as celebrated for her inspirational dedication to bringing together Bristol’s diverse communities as she is for her pioneering work in the creative, business and educational sectors. Make no mistake, she is an influencer and a leader and she has either already changed your life and you didn’t know it or she is about to change it very soon. So watch out!

Kalpna was separated from her closest family in India at two years of age, when her father and mother needed to go and find work. Her father, a self-taught man of both wisdom and intelligence, was as impassioned by his reading of Shakespeare and Dickens as he was by the teachings of Mahatma Gandhi. When Kalpna was six years old her father brought her to England, driving her across the many countries from India to Southall in London. Her father worked night shifts in a rubber factory and her mother worked day shifts at British Airways and they raised their children to go to university, as they had never had that opportunity themselves. Kalpna’s parents believed that the future of their children lay in education. The family lived in the overwhelmingly white population in Southall and racism was prevalent. Kalpna’s parents raised their children to be highly informed, work diligently at their studies, to be tolerant and  compassionate and to have a strong foundation in family and community values.

After studying Russian at London University and a number of jobs in her 20s, Kalpna got a two-week contract at the BBC as a production secretary. She completed all her work in just 3 days. It was the start of a hard-won rise to the top of the BBC, where she eventually became Head of Production for Factual TV Programmes and the BBC’s Natural History Unit, overseeing an annual income of £90 million and over 500 staff. She managed a whopping 550 hours of output including Frozen Planet, Planet Earth, Antiques Roadshow, Countryfile and many more. Kalpna established the BBC’s natural history unit as one of BBCs key global brands and doubled their commercial investment. She brought new technologies to the BBC enabling them to make ground-breaking and globally successful series. Kalpna’s outstanding media career was recognised with the prestigious Asian Women of Achievement Award – one of the many awards she has received.

Kalpna has gone on to add other strings to her bow – food writer and author of her first cookery book, head of trustees for a water aid charity, university board-member, business advisor, entrepreneur, community adviser, activist and mentor. At the heart of Kalpna’s professional and community work are the fearless questions she constantly asks of herself and others. Her questions are about challenging the assumptions we make about each other and about what we can change for the better and how. I can tell you that the first time I met her we sat in a café in Clifton and the questions poured out. Who are we? How have we evolved? Why have communities divided from one another? How can we find ways of crossing the divides and understanding each other? What are you doing, Mary? And how do you, how do we all, account for our lives? My coffee went cold.

Here in Bristol she has spearheaded a charity project called 91 Ways, which connects Bristol’s diverse 91 language communities through food. She organises supper clubs where community cooks prepare their favourite dishes, sharing their cultural backgrounds and the memories and personal stories of the food they cook with others. It is about connecting and understanding others, celebrating our differences and breaking down assumptions about each other. Kalpna’s project has taken off not just in Bristol but is being piloted in other cities. Her latest venture - Be on Board – aims to help top companies to increase their boardroom management diversity and supports and trains potential candidates. As you can see, Kalpna is a restless change-maker.

To all of you graduating today, I’d like to end with some words that Kalpna said to me over my cold coffee. ‘Leadership shapes culture so if you’re not using your leadership for social change what are you using it for? If we make the effort to make transformational change we change the world.’

Deputy Vice-Chancellor, I present to you, Kalpna Woolf, world-changer, world record question-asker, as eminently worthy of the degree of Doctor of Philosophy honoris causa.