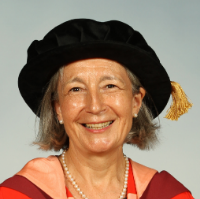 Clare Marx has had a distinguished career. She was a consultant trauma and orthopaedic NHS surgeon for 25 years and has held important health service and professional body leadership roles.

Clare is now Chair of the General Medical Council, the independent regulator for doctors in the UK whose primary focus is protecting patients. Clare’s philosophy, and that of the GMC, is that doctors should have integrity, excellence, fairness and transparency, and that they can both lead and work collaboratively as part of a team. These values, Clare maintains, are key to patient safety and wellbeing.

Clare was born in Coventry in 1954, the daughter of a teacher and an industrial chemist. While growing up and attending school in Warwick and later in Cheltenham, she says, she enjoyed the company of an older, ‘much cleverer’ sister and, rather than working too hard, re-arranging her bedroom. It was work experience in Coventry hospital that sparked her interest in becoming a doctor. She studied medicine in London at University College and then undertook junior doctor posts in London, Coventry and Northampton, training in general surgery before being drawn into orthopaedics.

Her first consultant surgeon post was at St Mary’s Hospital, Paddington then in 1993 she moved to Ipswich Hospital developing an interest in hip and knee replacement and trauma. Here she combined clinical practice with the role of clinical director in what was then the Accident and Emergency, Trauma, Orthopaedics and Rheumatology directorate. She also served as Associate Medical Director in that trust.

Clare works hard to make things better for patients by influencing standards of care, professional conduct and changing healthcare systems. Under her leadership the Royal College of Surgeons published guidance on teamwork. Surgeons have historically tended to base their practice on individual expertise and “eminence”. We are not renowned for interpersonal and team-working skills. Team work and interpersonal skills are now seen to be essential. Clare, recognises the need for supportive clinical communities, for care teams, for generosity, and for positive working environments. Her work to establish teams and collaborative working is nowadays pivotal to surgical professionalism and to delivering excellent patient care. The guidance document published under her watch at the RCS has impacted every operation performed in the UK. Team working, communication and safe systems make for safe surgery, and this saves lives. Clare has been pivotal in changing practice to include these standards.

Another key achievement for Clare has been her promotion of women in medicine and surgery. Today I have the honour of giving her oration. Two female eminent surgeons together in the same room is highly unusual. Yet women have outnumbered men in gaining places at medical school since last century and women in academic surgery and leadership is very rare. Clare was the first female president of the British Orthopaedic Association, the first female President of the Royal College of Surgeons and now the first female chair of the GMC. This is amazing. Her role modelling and leadership will pave the way to draw the best women into medicine and surgery. Her advice is, when faced with choices and job opportunities, not to be put off by internal voices saying ‘I am not good enough for this’ or ‘this is too difficult for me’, but rather to take on the challenge. Her achievements demonstrate where such an attitude can take you: in 2007 she was awarded a CBE for services to medicine, and in 2018 she was made a Dame Commander of the British Empire an honour richly deserved.

Away from work, Clare enjoys gardening (although her nails suffer), time with her (four-legged) personal trainer and holidays in the highlands of Scotland and the Alps with her husband Andrew. She loves opera and cares for her 97-year-old father who lives with her. I asked Clare what she would say to those of you on the brink of a career in medicine. Her advice to women and men alike is to be selective and focused in what you do. Make pragmatic choices based on what is available now, and not to be put off by difficulties, because most of the obstacles we face come from within ourselves. She believes in taking risks, as our worst fears are unlikely to happen. She says that her keys to success have been staying power, organisational skills, team working and being able to enlist help and sharing the joy and enthusiasm for improving the lives of patients and colleagues.

I am delighted to commend Dame Clare Marx to you, Pro Vice-Chancellor, as eminently worthy of the degree of Doctor of Science honoris causa.