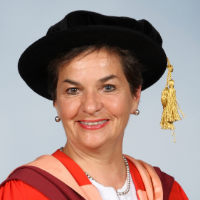 When we reach a certain stage in our career, it is tempting to ponder what your legacy will be: that metaphorical epitaph on your gravestone? What might yours be? What would you want it to be? One of the favourites on my school reports seemed to be “Could do better”. Not one I’d recommend you aspire to.

How about “I saved humanity from climate catastrophe”?. Does that sound a bit too melodramatic, a little exaggerated perhaps? Well, in the case of this honorary graduand, it would be an entirely fitting epitaph and one that could not have more significance for all of us, especially those of you just about to leave this University at the very start of your careers and your journey through the world: a world made safer, cleaner and more just as a result of the remarkable efforts of Christiana Figueres.

Karen Christiana Figueres Olsen was born in San Jose, Costa Rica, to a father who was the three-times president of the country and a mother who served as Ambassador to Israel. Clearly, she had diplomacy running through her veins. A skill, it turns out, that would prove indispensable later in life. She grew up partly in the President’s House and partly on the family farm called La Lucha sin Fin: “the struggle without end”. A somewhat prophetic motto.

While at school she learnt to speak fluent German, and went on to study anthropology at Swarthmore College, Pennsylvania. She then spent a year with an indigenous people who inhabit the Talamanca Mountains of Costa Rica, developing a culturally sensitive literacy programme that was used for many years afterwards. After that, she came to the London School of Economics to complete a Masters in Social Anthropology, and then spent time in Germany and the US working in various public service roles.

In 1995 she embarked on her mission to save humanity from themselves, as Costa Rica’s representative to the United Nations Framework Convention on Climate Change, or UNFCCC. At the same time she also became the founding Executive Director of the Centre for Sustainable Development in the Americas. Over the succeeding 15 years her diplomatic skills and in particular her ability to connect with politicians and hardened negotiators at a human level, placed her in a unique position to make the vital breakthrough that had eluded world leaders up till then.

The UNFCCC organises annual gatherings, called Conference of the Parties meetings, or COPs, to negotiate the terms of climate action. In 2009, the world held its breath over the crucial, 11th-hour negotiations at COP15 in Copenhagen. The future of the planet, and everyone living on it, depended on a successful treaty emerging. That didn’t happen, and the negotiations broke down, leading to recrimination and bitter disappointment from many involved. Someone had to pick up the pieces of an entirely broken negotiation strategy. That someone was Christiana, who became Executive Secretary of the UNFCCC in 2010.

If you think that whoever follows Theresa May into Number 10 has a challenging task delivering Brexit, well imagine multiplying that challenge by 195 nations and you get a feel for what Christiana was embarking on. Many considered it an impossible challenge. On a wall in her office in Bonn, Christiana had a framed maxim that read “Impossible is not a fact, it is an attitude”. That’s a motto worth remembering, because she proved it to be true. Just five years later, at COP21 in Paris, Christiana achieved the deal of the millennium, a deal even Donald Trump would have admired for its courage, vision and improbability. She managed to convince 195 states, representing almost the entire population of the planet, to agree to limit global warming to less than 2 degrees.

During COP21, many cities with mayors committed to reducing carbon emissions at the city scale, including the then mayor of Bristol, George Ferguson, who worked with Christiana on this city-level action. As some of you will know, the city of Bristol was the first European Green Capital in 2015 and is now leading the way in the UK with an ambition to be carbon neutral by 2030. Some of you may also be aware that this University was the first in the UK to declare a climate emergency and is now taking steps to act on that declaration.

The importance and significance of Christiana’s achievement in Paris cannot be understated. It will affect every one of you sitting here today and every citizen of the planet. But Christiana has not stopped there. Of course not. She continues to campaign and advocate for climate justice, for our collective futures and for a safer, more habitable world. For these efforts, she has been named by Fortune magazine the seventh of the world’s greatest leaders in 2016, and by the BBC, one of the five most powerful women in science in 2017.

We first met when I invited her to speak on safeguarding the integrity of science and facts at a meeting I organised in Vienna in 2017. What struck me then, and now, is her energy, enthusiasm, positivity, stubborn optimism and the humanity with which she tackles the most challenging problems we face today.

Vice-Chancellor, I present to you Karen Christiana Figueres Olsen as eminently worthy of the degree of Doctor of Laws, honoris causa.