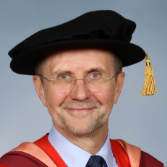 True revolutions in science – that completely change the way we think and work – are few and far between. However, today’s honorary graduate, Virginijus Šikšnys, can rightly claim to have helped instigate a revolution in gene editing, brought about by his work on CRISPR.

Today’s graduates know what CRISPR means and the potential that gene editing holds. Many will have attended lectures on CRISPR, read research articles that used CRISPR, and some may even have used CRISPR in their research projects. They will understand, and share, the excitement of the “CRISPR Craze”. (And for their guests, don’t worry, they can tell you all about it later over dinner). The central idea is that scientists can now easily manipulate DNA, the instructions for life, within the cell of any organism. We can turn genes on or off, and change genes from mutant to healthy forms, allowing us to analyse genetics in unprecedented detail. Starting with a few pioneers such as Virgis, as he is known to us, thousands of labs are now using and customising CRISPR technologies. Gene editing is already being used to treat diseases. Virgis helped lay the foundations for these remarkable developments, and he continues to surprise us with his discoveries.

Virgis is a proud Lithuanian who studied organic chemistry at Vilnius University and enzyme kinetics at the Lomonosov Moscow State University. He has spent almost his entire research career in the Lithuanian capital, where his main interests have been structure-function relationships of enzymes that interact with DNA. He is also a proud biochemist.

For many years he studied how bacterial restriction endonucleases combat viruses. These enzymes act as molecular scissors, cutting DNA at specific sites, and they also have great biotechnological value as tools for cloning. More than any other group, Virgis’ lab has shown us the wide diversity of restriction enzyme mechanisms, providing approximately one third of the X-ray crystal structures of these enzymes. In 1992, Bristol was very fortunate that Virgis started a collaboration with Professor Steve Halford, of what was then the Department of Biochemistry. Funded by consecutive grants from the Wellcome Trust, the Vilnius and Bristol scientists further illuminated how restriction enzymes cut DNA. Professor Halford has told me that his elevation to a Fellow of the Royal Society, the highest scientific honour in the UK, was due in no small part to this collaborative work with Virgis. Bristol continues to this day to work with the Vilnius lab on restriction enzyme biology.

Virgis realised that to carry out precise “genome surgery”, as he has termed it, scientists would need user-programmable molecular scissors. Since the restriction enzymes were not easy to re-engineer, his inspired decision was to study another bacterial system that also evolved to combat viruses: CRISPR. His first major breakthrough was to demonstrate in 2011 that CRISPR enzymes could be moved from one bacterial species to another and remain active; the first hint at the amazing adaptability of CRISPR. His second, and most important, breakthrough was the characterisation in 2012 of CRISPR Cas9. Cas9 was a simple system comprising a single enzyme and two RNA molecules. Virgis demonstrated that by changing the sequence of just one RNA, scientists could programme these molecular scissors to cut a unique DNA site. This work, alongside contributions from other CRISPR pioneers, paved the way for an explosion of research into gene editing, and no more than six months later, the technology was already being used to edit DNA in human cells. My own lab has been lucky to collaborate with Virgis on the Cas9 mechanism. Virgis continues to make new discoveries, recently showing that CRISPR enzyme activity tells the cell it is being infected. This work is opening new avenues of research into bacterial signalling pathways.

It is not necessarily easy for a scientist from Lithuania to garner the recognition they deserve, and the CRISPR field is somewhat competitive, but Virgis is now, rightly, starting to collect awards for his lab’s contributions. These include being the co-recipient of the 2016 Warren Alpert Foundation Prize, the 2017 Novozymes Prize, and, in May this year, the 2018 Kavli Prize in Nanoscience. It is almost certain that, within the next few years, a Nobel Prize will be shared for CRISPR. Today’s honorary graduate has as much of a claim as anyone to be recognised.

The other graduates in the Hall today can take away a lot from Virgis’ scientific journey. They have the excitement and potential of CRISPR. Even if they don’t plan to stay in science, gene editing raises important ethical issues: should we allow the editing of human DNA, or will that lead to “designer babies”? These scientists have the knowledge to inform that important debate. They should also be inspired to trust their instincts; Virgis was brave enough to work on CRISPR before it became fashionable. And finally, Virgis has a message about recognition which he gives his team, and I paraphrase; work hard and, in the end, you get some rewards.

Pro Vice-Chancellor, I present to you Virginijus Šikšnys as eminently worthy of the degree of Doctor of Science honoris causa.