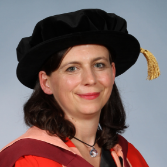 Sarah Glennie’s career in the world of modern and contemporary art began here in 1992 when she crossed this platform to graduate in History of Art with History. For what has followed since then the word gesamtkunstwerk comes to mind. It describes a ‘total’ work of art which deploys different media and materials to create an enveloping, multi-sensory experience.  It is a fitting analogy to use for what today’s honorary graduate has achieved as a curator and in arts administration across a wide spectrum ranging from fine art, performance, film and screen media to innovating museum projects, commissioning new works from leading international artists, public engagement with and advocacy for the creative industries, and now as a leader in art and design higher education. In each of these areas she has made a profoundly significant contribution to the Republic of Ireland’s distinctive and influential place in the world of art and culture.

Professor Glennie’s success is all the more noteworthy for someone from this country because she has reached the summit of her profession in Ireland, not once but three times: first when she became Director of the Irish Film Institute; then as Director of the Irish Museum of Modern Art; and since January this year as Director of the National College of Art and Design. Heading one of them is enough to crown any career. To lead all three has never been done before, and it sets a precedent which is unlikely to be equalled for a long time, if ever – and Sarah Glennie is barely in mid-career. How did it come about?

Obviously a First Class Honours degree from Bristol has had something to do with it, but those of us who taught her here – or like to think we did – cannot really take the credit, though of course that will not stop us. At least we can claim that we recognised in her an exceptional talent, evident early on from the enviable ease with which she mastered Ludwig Wittgenstein’s ideas about perceptual ambiguity and ways of seeing. The unusual acuity we saw in her then has served her well ever since as a writer, critic and curator.

She started work as an exhibitions organiser at Kettle’s Yard in Cambridge, an arts centre and collection created by a remarkable patron of modern British art with a passionate commitment to contemporary artists. The job involved all those mundanely routine tasks that must be done so that a show goes up on time – everything from seeing loans in and out to chilling the champagne for an opening. Kettle’s Yard did much to shape her own professional interests and ideals. From Cambridge she moved to the Irish Museum of Modern Art (IMMA) in Dublin in 1995 where, as a curator, she worked with leading artists on major installations which brought her international attention. From 2001 to 2005 she was back in England with the Henry Moore Foundation’s Contemporary Projects for which she conceived a series of critically acclaimed exhibitions, among them Paul McCarthy at Tate Modern, Stopover in Venice during the Biennale in 2003, and Romantic Detachment for New York’s Museum of Modern Art PS1 Contemporary Arts Center in 2004. The next year she was back in Ireland as Artistic Director at The Model in Sligo, a leading arts centre which houses the The Niland Collection.  Major successes followed, among them working with Tacita Dean on a new film and accompanying photography show for Cork in 2005 which was a highlight in the city’s European Capital of Culture programme, commissioning Ireland’s show for the 2005 Venice Biennale, and a defining Andy Warhol show co-produced with the Warhol Museum in Pittsburgh, The Eternal Now: Warhol and The Factory ’63 to ’68, which toured internationally in 2007 and 2008.

Curating contemporary visual culture today is often a complex multimedia and multidisciplinary enterprise, and in her work Sarah Glennie regularly brings together fine art with installation, performance, photography and screen media. Her reputation for crossing creative boundaries took her to the Irish Film Institute as Director from 2008 to 2012; her time there added to its reputation as a world-class institution. Then she returned to IMMA as its first woman Director at a moment when there were challenging funding issues to confront; she took it forward by delivering a dynamic programme that brought in record attendances, and during her tenure there she saw its Lucian Freud Project inaugurated with the largest display of the artist’s work to be seen anywhere in the world.  Last year her appointment as Director of the internationally renowned National College of Art and Design was announced.  She started in January, the first woman to lead it since it became a State college in 1924 – indeed, the first woman at its head throughout its long history going back to 1746 when the Dublin Society incorporated what had been a private drawing school - and she was made a professor in recognition of her contributions to scholarship and the arts. There, no doubt, she will continue to do what she does best, creating excellence through curating talent.

And now, she is here again on the platform from where she started on what has already been an almost indecently distinguished career, supported by her family who are as proud of her as are we. So, I end by welcoming at this very special occasion her parents, her husband Garrett Phelan, their daughter Lorna and their son Oliver; and, Sarah, most especially, we welcome you back.

Pro Vice-Chancellor, I present to you Sarah Louisa Mary Glennie, alumna of this University, as eminently worthy of the degree of Doctor of Letters, honoris causa.