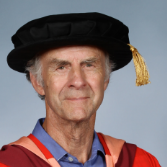 I present to you today a man who needs no introduction. He is well known in this city, our country and across the world. I present to you Sir Ranulph Twisleton-Wykeham Fiennes, often described as Britain’s greatest living explorer, a prolific writer and poet and a man who in his later years has made a major difference to patients with heart disease and cancer by his unflagging charitable efforts on behalf of the British Heart Foundation and cancer charities.

For today’s graduands Sir Ranulph has many qualities that they might learn from and try to emulate in their own lives. He is a decorated officer in the service of his country, he has pushed the limits of human endeavour through his ground-breaking explorations and he has applied his fame to deliver charitable benefit for others.

Sir Ranulph was born in Windsor in 1944. Sadly, he entered the world after the death of his father in active service in WWII. He spent his early life in South Africa and returned to this country to be educated at Eton. The academic life was not for him and he enlisted as an officer in the Royal Scots Greys and subsequently the SAS as an expert in demolitions. He saw active service in Oman against Marxist insurgents and was decorated for his bravery by the Sultanate of Oman.

As an explorer and adventurer, he has been active for more than 30 years. His achievements are many but to summarise a few today:

Sir Ranulph has raised massive amounts for charity for both cancer and heart disease. He is the patron of the Bristol Heart Institute. I count him as a personal friend (in my dreams I hope that one day he will ask me to join in one of his crazy adventures).

Vice-Chancellor, I present to you Ranulph Fiennes, world-famous adventurer and explorer who has pushed the limits of human endeavour and endurance, as eminently worthy of the degree of Doctor of Laws, honoris causa.