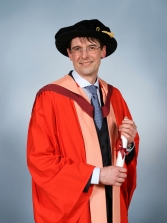 It is my privilege today to give this oration on the award of an honorary degree to Mark Watkins.

Mark is a double Bristol graduate, having earned a first-class honours degree in Electrical and Electronic Engineering in 1986; and two years later an MSc in Information Engineering.

After finishing his first degree, Mark joined Hewlett-Packard, and has been there ever since: he is currently Vice President and Chief Technology Officer for digital storage at Hewlett-Packard Enterprise (now known as HPE). He is also an HPE Fellow, a prestigious title awarded to a select few who have made the greatest technical contributions. Mark was only the second employee outside the USA to be made an HP Fellow. It is similarly rare that HPE has a Chief Technology Officer of one of its business units based outside the US. But then, Mark is a truly exceptional talent.

Mark’s story starts here in Bristol: he was born in Clifton, just a short walk from our campus, before moving to Crowthorne in Berkshire as a small child.

As a teenager Mark developed a fascination for taking things apart to understand them: first lawnmowers, then cars. I can also report that he spent a fair amount of time experimenting with home-made explosives: two of his more notable experiments were the sudden transformation of an ornamental lake into a temporary airborne water feature and the extensive remodelling – some might describe it as removal – of an entire sand-bunker from a local golf course. Allegedly.

Thankfully there is no record of any explosions in his time as a student here. In 1986 while working as a Bar Manager at Goldney Hall, Mark met Carolyn Eaton, a History undergraduate. Thirty-two years later, they remain very happily unmarried, and have lived in the Bristol area ever since. Their children Alex and Anna were born in 1997 and 2001 respectively, and are both scientifically minded students.

In his more than 30 years at HP, Mark has worked on teams developing the leading edge of digital data storage. Initially the focus was on the fastest and most efficient ways to store data on magnetic tape, then on arrays of hard disk drives, and most recently the storage of ultra-large-scale digital data in “the cloud”. Mark has taken ideas from rough notebook sketches all the way through research and development to market deployment, where customers’ demand for the solutions and services that his team originated has added greatly to HP’s revenues.

Many people who have worked with Mark comment on what an unassuming, modest person he is; that you wouldn’t necessary realise he is CTO of a major business division for a global giant. To illustrate this, I wanted to include some comments from his junior colleagues.

Contacting members of Mark’s team was easy, because many of them are former Bristol students: he has over the past several years hired some of our best young men and women. When I asked them for a few words, three things were striking in the responses: the replies came very fast; were very long; and all absolutely glowed with admiration and gratitude.

Here are some brief snippets:

One of the things you learn pretty quickly about Mark is that the hype is true, he knows the world of [digital] storage inside out.

I don't think many bosses would have given the encouragement and opportunities that Mark has, and for that I am extremely grateful.

I genuinely admire the fact that he’s never stopped working deep into the code [the software], avoiding any suggestion that progressing higher up […] means giving up day-to-day technical responsibility.  You’d never assume how senior Mark is from the way he acts, but you’d intuitively grasp how knowledgeable he is, and how glad he’d be to share that knowledge.

His stories have inspired me greatly… Mark is never too busy to explain or talk through an idea or concept, and has given members of the team huge opportunities they probably wouldn’t have had otherwise.

… he is an incredible mentor, not because he tries to be, but because he has accumulated so much experience that it is unavoidable that you are going to learn something just by interacting with him … I feel incredibly lucky to have started my career under his wing...

These quotations illustrate that Mark has never lost his passion for working at the front line, rolling up his sleeves and working alongside the most junior members of his team, never asking them to do something he couldn’t or wouldn’t do himself, leading from the front, and generously inspiring the next generation of engineers to follow in his footsteps and carry on pushing the boundaries of the possible. He is a graduate of our University, and a Bristol Engineer, of whom we are all very proud.

Vice-Chancellor, I present to you Mark Robert Watkins as eminently worthy of the degree of Doctor of Science honoris causa.