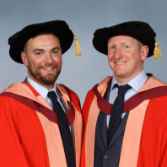 I first met Jonny and Neil, our honorary graduands today, when Zack Rose, an undergraduate Politics and International Relations student, got in touch and introduced us after the tragic deaths of three of our students in the autumn of 2016. I was immediately struck by the deeply moving nature of their story, and the subsequent work each was doing to help others experiencing mental health difficulties to lead normal lives and prevent the deaths of those struggling to cope.

On 14 January 2008, Jonny was ready to kill himself. He had recently been diagnosed with schizoaffective disorder which he said felt like a “life sentence”, given the negative media coverage of schizophrenia. He was ready to jump from London’s Waterloo Bridge when Neil, who he had never met before, came along and said, “It’ll get better mate, you will get better”. It was this simple yet timely intervention that helped Jonny to stop and step back from the brink. After this chance encounter Neil went on to his work, and Jonny started on the long road to recovery. Some six years on, his health having improved, Jonny turned to social media to find the stranger who had saved him that day so he could personally thank him and show him how he had recovered.

Subsequently, Jonny became an award-winning mental health campaigner, film producer, public speaker, writer and vlogger. In the Queen’s 2017 New Year Honours List, he was awarded an MBE for his services to mental health and suicide prevention. Jonny has made films on YouTube about his condition that have been watched by hundreds of thousands of people, and he has carried out mental health work in India to change attitudes and reduce stigma. His first book, The Stranger on the Bridge, charts his account of living with mental illness from childhood to the present day, and includes a contribution from Neil.

Neil had been a fitness coach and personal trainer since 2007. Being reunited with Jonny for the first time in six years deeply affected him. Neil has since gone on to join the charity Rethink Mental Illness as an ambassador, helping to raise awareness about suicide and de-stigmatising the perceptions of mental health through media coverage, corporate and public speaking events and advocacy work. Neil was given a special recognition award at the Pride of Britain Awards.

In September 2017, Jonny and Neil spoke at the signing and launch of our Time to Change pledge in this Great Hall in front of 700 staff and students. By making this pledge, the University has declared its commitment to challenging the stigma and discrimination which can sometimes make it difficult for people to reach out for support. I am pleased to say that good progress is being made with the development and implementation of our new mental health framework, but as subsequent student deaths this year make clear, there is no room for complacency. This has been a very painful and challenging period for our community, but we are working hard to develop a University-wide approach to supporting the wellbeing of our students and our staff.

Mental health and wellbeing is an area of increasing concern, for each of us personally but also for society. As graduates in the Health Sciences, Animal Behaviour, Bioethics, Dentistry, and Psychology, you may find it an increasingly important consideration in your professional lives. It is only by learning how to look after your own mental health and wellbeing every day that you will stay well and be able to help others do the same. Research shows that connecting with others, being physically active, being mindful, learning new things, and giving to others are all associated with good wellbeing.

To these five ways to wellbeing I would add a sixth: finding your own meaning and purpose in life. I find it striking that despite, or perhaps because, of living with mental illness, Jonny has discovered a profound meaning and purpose to his life which is to help improve the lives of others living with similar conditions. Equally, Neil’s compassionate act of kindness which helped make this possible has also transformed the course of his own life, in ways he could not have anticipated when he stopped to talk to Jonny on that bridge.

Pro Vice-Chancellor, for their services to mental health and suicide prevention, I present to you Jonny Benjamin and Neil Laybourn as eminently worthy of the degree of Doctor of Laws honoris causa.