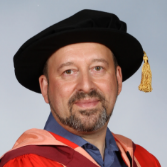 Many people’s stereotype of a scientific genius is someone who locks themselves in their lab all day, or stares at complex equations, and, rather than talk to real people, perhaps prefers conversations with their computer, or the plant on their desk.

Similarly, the stereotype of a persuasive communicator, a “darling of the media” if you will, is someone who can “talk a good game”, but perhaps plays fast and loose with the truth.

Today’s honorary graduate, Gavin Schmidt, flies in the face of both these stereotypes. He is undoubtedly a scientific genius, but combines this with a “larger than life” personality, and he is one of the world’s most effective communicators of climate science, with a passion for accuracy and clarity.

Gavin is also a local “west country lad”: He was brought up near Bath, but since moving to North America 25 years ago, has developed a somewhat unique English-American twang, which, and I can vouch for this, is particularly unique when singing karaoke after a hard day’s work at an international conference.

Gavin’s research expertise is incredibly broad. He is the lead developer of one of the US climate models which, through the Intergovernmental Panel on Climate Change, provided the scientific grounding for the Paris Agreement, that has provided hope for the de-carbonisation of our planet. In this role he is ultimately responsible for the approximately one million lines of computer code that make up this incredibly complex climate model – although I’m not sure whether he has checked them all!

He is also one of the leading proponents of using past climates to better understand future climates, and it was in this context that I first met Gavin. I was giving a talk at his institute, about the contribution to Earth’s past warming of various different climate drivers. It was an interesting subject to me – and about three other people in the world – but not exactly groundbreaking. However, Gavin saw that the problem could be re-framed in terms of how different climate feedbacks worked on different timescales  – something that had profound implications for future climate change. We worked together to publish this, and his scientific insight and appreciation of the “big picture” were a real inspiration to me, as they have been, and I am sure will continue to be, to countless others.

As I said, he has an unparalleled passion and energy for scientific communication. His 2014 TED talk on the emergent patterns of climate change has attracted over one million views on Youtube (admittedly not as many as “cute cat falls over”, but still very impressive). Under his Twitter handle, @climateofgavin, he has 30,000 followers, to whom he provides not only a staunch defence of climate science and integrity in the face of relentless attacks from climate sceptics and misinformation, but also insightful and provocative commentary on the latest climate research.

He has also authored a book, called Climate Change: picturing the science, that shows striking images of the natural environment, from shrinking glaciers to drying lakes, and follows scientists on fieldwork from the polar icecaps to tropical coral reefs. I am told that he has a secret ambition to become a successful professional writer (property prices in New York are expensive on a government salary), and, given his incredibly fertile imagination, I can certainly see him achieving this.

Fifty million years ago, there was a dramatic warming event in the climate record, that many of our Geography graduates here will no doubt have learnt to love during their studies: the PETM, or Paleocene-Eocene Thermal Maximum. We can study the PETM today because of the imprint it left in a distinct layer of the rock record, where shifts in the properties of rocks and fossils indicate a rapid increase in past carbon dioxide and a global rise in temperature. Gavin asked a provocative question: might imprints of what we are now doing to our planet be seen 50 million years in the future? And if our civilisation were to come to an abrupt end, would a future species know we were ever here? He concluded that many aspects of our civilisation – even our cities and plastic waste – would be wiped out over this long time owing to erosion. This Great Hall would be reduced to sand and mud and washed away. The only remnant would be a record of our influence on climate, just as the PETM appears to us. In fact, the similarities between the PETM and the impacts we are now having on the environment have led Gavin to suggest a startling possibility: that 50 million years ago, the PETM was caused not by a “natural” event, but by a species, maybe not unlike our own, that evolved on this planet, invented the wheel, had an industrial revolution, burnt fossil fuels and emitted carbon dioxide, and then came abruptly to an end, victims of the changes they wrought on their environment. Thanks to people like Gavin, and our passionate students graduating today, we can hope that our civilisation does not share the same fate.

Pro Vice-Chancellor, I present to you Gavin Anthony Schmidt as eminently worthy of the degree of Doctor of Science, honoris causa.