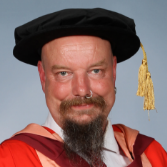 Dom Wood, today’s honorary graduate, was brought up in Sevenoaks in Kent. His talent for darts and his Saturday job on the market honed his arithmetical ability. It was Dom’s flair for Maths that brought him westward. He arrived in Bristol in 1987 to read Mathematics here at the University.

However, after a year, Dom concluded that while he liked Maths it didn’t excite him. He sought a transfer to Psychology, but the funding arrangements at the time prevented this. So Dom finished his BSc degree with a mix of Maths and Psychology units. And a passion for the city of Bristol.

After leaving University Dom settled in Montpelier in a house shared with several other graduates.  But he didn’t know what he wanted to do.

Since 1990 Dom has devoted his career to supporting young people who are homeless or at risk of homelessness. Dom has been the driving force in transforming the nature and scope of support provided in our region.

Yet, it all began by chance.

Having left University, Dom started a two-week temporary job in the Hostel in Jamaica Street, which in those days was for homeless men.  He loved it. Not only did he learn a lot, but he saw new ways of doing things, including getting the organisation to embrace new technologies.

Dom went into that first job with no particular interest in homelessness. But, looking back, University friends would say they knew that was his calling. They recall that when walking from Hiatt Baker to the University: “we always had to wait for you while you talked to people on the streets”.

When he spotted an opportunity to work with young people as a Senior Housing Worker he rushed to apply. He joined Priority Youth Housing, a small organisation employing only four people. Shortly afterwards, Dom completed a Postgraduate Diploma in Housing Studies at the University of the West of England, allowing him to pursue his new-found love of housing law and housing history.

Dom became Director at Priority Youth Housing in 2003. In 2009 he spearheaded the creation of 1625 Independent People, through the merger of Priority Youth and Wayahead. During his tenure as Chief Executive, Dom has grown 1625 Independent People to its current position as the leading youth homelessness charity in the region and a member of the National “End Youth Homelessness” Movement.

Dom has a strong understanding of the issues facing young homeless people. He is an articulate advocate for change, and for fully engaging with young people about the services being provided. He summarizes his driving philosophy as: “a passion for what young people can achieve, social justice, wanting to right wrongs”.

Dom believes young people should not only have a safe environment in which to live, they should also aim to establish themselves as able to live independently. While 1625ip is an organisation working with those at risk of homelessness, Dom notes that “what we really concentrate on is self-worth, aspirations, and work”.

Dom is the acknowledged ‘go to’ person in the sector. The impact of his work has been felt widely: both directly, and through his willingness to advise and share innovative and effective practice. He puts young people at the heart of all he does … and he challenges those he meets to do the same.

He holds many voluntary positions, including Vice Chair of Bristol Supported Housing Forum, membership of the Preventing Homelessness Challenge Group and of Bristol's Children, Young People and Families Board. He has positively influenced change through partnerships with other service providers, motivated by the objective that young people should get the best possible outcomes.

Locally, as well as improving the quality of housing and services provided to young people, Dom has led successful negotiations to bring empty properties back into use for young people.

Nationally, 1625ip’s Psychologically Informed Environment Framework has been shared - and was awarded Skills for Care’s Best Practice Exemplar in 2014. These are new services, piloted and embedded by Dom, designed to enable young people to address deep-rooted trauma first, before achieving positive outcomes in their lives.

Dom’s passion for creating opportunity for young people means he is the architect of many service innovations. He has developed access to education for young offenders; established peer support as a core element of housing provision; created volunteer and apprenticeship opportunities; developed a new programme of accredited open access learning. And many more - often working in partnership with the business, education and voluntary sectors.

Dom’s job is his life’s work. He is committed, dynamic and optimistic, continually finding ways to make the system work for vulnerable young people in complex situations, despite strategic and political challenges, and financial pressures. 1625ip has recently been concentrating on fundraising and partnership work with businesses. Recent successful partnerships include working with Ovo Foundation, Andrews Charitable Trust, Unite Students, and Deloitte.

Dom works tirelessly to support his staff, his peers and his vision of a better future for others. His work crosses political boundaries and he enjoys an exceptional reputation across the sector. He is highly respected by local authorities and partner organisations alike. Dom is a true visionary and leader, committed to empowering others by practicing distributed leadership and reflexive practice in a learning organisation.

Dom stands as a great example of what can be achieved if talent, energy and passion are channelled into something you truly believe in.

Pro Vice-Chancellor, I present to you Dominic Wood as eminently worthy of the degree of Doctor of Laws, honoris causa.