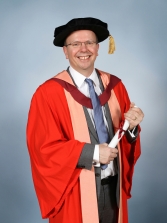 Ask Col Needham what he loves about film and he borrows that line from Hitchcock: ‘to make a great film you need three things - the script, the script and the script’. For Col, whether it’s gritty social realism or science fiction or European art house - as long as it has an internally consistent, compelling and immersive story it works. By that measure, Col Needham’s story makes the perfect film.

Before launching the world’s number one movie website, the Internet Movie Database, (or IMDb) in 1990, at the very start of the Internet as we know it, Col Needham was working as a software engineer at Hewlett Packard here in Bristol. Although he gained a degree in Computer Science from Leeds in 1988, Col’s first and true love was film. Whether it was watching Snow White with his grandmother or seeing Jaws at the picture house, films captured Col’s emerging cinematic sensibility.

His childhood in the 1970s was marked by classic cinema and the futuristic promises of personal computing. For Christmas 1979, at the age of 12, he received and built his first computer with a Science of Cambridge MK14 kit. He saw Star Wars and Colossus: the Forbin Project - about an advanced American defence supercomputer that becomes sentient and tries to assume total control of the world and end all warfare for the good of humankind. He rented Alien from the local video shop and watched it on the family VCR 14 nights in a row. And he started typing out information about every film he had seen.

It was videotape that made this possible. Before video, audiences watched film and television as it was projected and broadcast. With VHS and Betamax, audiences could stop the action, rewind and play again. Suddenly, the murky world of dolly grips, best boys, wardrobe assistants, focus pullers, animal wranglers, stunt doubles and script supervisors became easily available to viewers. Like Vannevar Bush before him who, in 1945, dreamed of a ‘memex machine’ that would make more accessible our bewildering store of knowledge through networking it, Col envisioned a future in which we could visualise the global filmmaking industry. Before Facebook and before MySpace and Friends Reunited, Col created the cinematic social network.

Col’s original paper diary went digital in 1981 as he coded the information into his new Sharp MZ80K computer. It was this list that, on October 17, 1990, began its journey onto the Internet as IMDb. This was a worldwide volunteer effort from 1990-96. Yet he and wife Karen still found time to start a family. But even that was framed by the silver screen. Col and Karen were determined to attend the opening of Jurassic Park, just after their twin daughters were born in 1993. They co-ordinated the babies’ feeds with the running time of the film and Karen’s sister gamely babysat. How successful the evening was seems to depend on who you’re asking, although Karen’s sister just remembers the pterodactyl-like screaming.

In 1998, Amazon.com bought IMDb, and the site is now used by more than 250 million people a month. The database contains over four million movies, TV and entertainment programs and more than eight million cast and crew members. We now use IMDb to find information about local movie showtimes, ticketing, trailers, critic and user reviews, personalised recommendations, photo galleries, entertainment news, quotes, trivia, box-office data, editorial feature sections and a universal Watchlist. It also serves the film industry, from Hollywood to the independents, with IMDb Pro, which is used by casting agents interested in keeping track of actors’ ‘star ratings’, and its Withoutabox service, now the main submissions route for independent film festivals.

What does the future hold? Col and his colleagues have produced an incredibly detailed and commercially useful map of how we interact with what we see on our screens. He still wants to turn all of us into film fans. For him, IMDb is an extension of the old Reithian public service broadcasting mission to inform, educate and entertain. Col believes that IMDb democratises filmmaking, by bringing audience decision-making and knowledge together with that of the filmmakers. Col’s vision is that the wisdom of the crowd will drive future filmmaking.

When I asked Col for the one piece of advice he would give to you, emerging graduates, to guide your own futures he didn’t hesitate: ‘See more movies!’. As Steve Martin says in the film Grand Canyon, ‘That's part of your problem: you haven't seen enough movies. All of life's riddles are answered in the movies.’ And while that line takes on a more politically urgent tone in the current, but long overdue, climate of addressing power and exploitation across a number of industries, it none the less remains true.

Chancellor, I present to you Col Needham - film fan, ranconteur, entrepreneur, data artist and utopian democratiser of the global film industry - as eminently worthy of the degree of Doctor of Letters honoris causa.