The Rt Hon. the Baroness Hale of Richmond, DBE 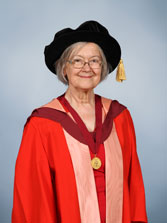 Early in 1945, just as the war to end all wars had entered its final punishing year, a little girl called Brenda was born in Leeds. One wonders whether Brenda’s parents, both teachers - although as Brenda reports, her mother was required by law to give up teaching when she married Brenda’s father - had any inkling that their middle child, one of three daughters, would rise to such dizzying legal heights, shattering multiple glass ceilings along the way. What parent could imagine that their clever little girl would become the first - and only -woman to join the Judicial Committee of the House of Lords in its 600 years of existence; and one of the most outstanding and celebrated jurists in the history of British law?

Brenda, the Right Honourable the Baroness Hale of Richmond, is a phenomenon; and she is our phenomenon because we at the University of Bristol have enjoyed the privilege of her Chancellorship for 13 wonderful years. Throughout her tenure, Brenda’s front and foremost concern was always you, our students. She has graced our graduation ceremonies with consummate style and genuine warmth; while her achievements as an ‘establishment outsider’ – a woman and a product of the state education system –are an inspiration to anyone who doubts that a winning combination of intellectual talent and sheer hard graft cannot triumph over ignorance and prejudice.

Brenda’s CV is Oscar-winningly good. The only child in her village primary school to pass the 11-plus, Brenda went on to excel at grammar school, winning a scholarship to Girton College Cambridge to study law. To put these achievements into context, you need to know that when Brenda sat her 11-plus, there were twice as many grammar school places for boys than girls in her district and when she applied to Cambridge, only three out of 24 colleges teaching law accepted women. Brenda went on to achieve a starred first, graduating top of her class after which she joined the University of Manchester Law School as a young academic, combining lecturing with study for, and eventually practice at, the Bar. It goes without saying that she came first in her year in her Bar Finals.

While at Manchester, Brenda carved out a name for herself in the fields of mental health law and family law. Moreover, she was co-author of one of the first modern texts on women and law - Atkins and Hoggett, published in 1984 - a book I eagerly devoured during my formative years of legal education, a time when there was little or no legal scholarship on women’s treatment under law. Thus, even in her early academic career, Brenda was a trailblazer, and I am one of many feminist legal scholars who have benefitted from her pioneering scholarship.

After some years at Manchester, Brenda became the first woman - and youngest ever - Law Commissioner, leading the family law team. During her time at the Law Commission, she was at the forefront of a number of important law reform projects concerning children, divorce and mental capacity, the rich benefits of which can still be seen today, most notably in the Children Act 1989 and Mental Capacity Act 2005. By this time Brenda was also a wife and mother, juggling what was becoming an increasingly impressive career alongside the usual domestic duties which women were expected to assume.

Nowadays it is common to talk about the need for work/life balance or to stress the importance of family-friendly working arrangements; but when Brenda started her career, the difficulties women encountered in accessing paid work were still viewed to a large extent as an unavoidable result of their biology, something the law could not and should not do anything about. The Sex Discrimination Act was only passed in 1975 and in the same decade, the earliest form of maternity leave protection was introduced. But much of the family-friendly infrastructure we now take for granted – parental leave, flexible working arrangements –  came much later, in the late 1990s and early twenty-first century. Brenda reached the highest echelons of the legal profession in a family-unfriendly working environment, once again reminding us of what is possible even in the face of seemingly insurmountable obstacles.

When the House of Lords transitioned into the Supreme Court in 2009, Brenda was among the first cohort of justices, and once again the only woman. Since then, she has become Deputy President of the Court and adjudicated in a wide range of cases, garnering a reputation for her strong stance on human rights and social injustice. And yet still she has found the time, not only to come to Bristol regularly and support our educational efforts here, but also to travel up and down the country, and sometimes across the globe to make the case, in words and in deeds, for judicial diversity.

An Honorary Fellowship is the highest honour the University of Bristol can bestow.  The title is usually conferred on someone who has attained distinction in their academic field and/or has contributed consistently and over a significant period of time to the life of the University. Brenda, Lady Hale, combines a lifetime of unprecedented academic and professional achievement with real humanity and generosity of spirit. She is a model of good living from which countless numbers of University of Bristol graduates have drawn inspiration. It is our great privilege to honour her today.

Chancellor, I present to you The Right Honourable the Baroness Hale of Richmond as eminently worthy of an Honorary Fellowship of the University of Bristol.