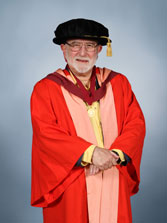 it is my privilege to commend to you Professor Sir Michael Berry to be an Honorary Fellow of this University. An Honorary Fellowship is the highest honour the University can bestow and one that is awarded only infrequently. In Michael’s case, the Fellowship recognises particular distinction in his academic field and his outstanding contribution to higher education in the UK and across the world.

And it is not only our university that honours Michael – he has received a list of awards, titles, and medals so long that if I were to mention them all I would surpass the time I have allocated for this presentation. You can find all of them on his website! I would just mention that he won the Wolf Prize, the most important science prize besides the Nobel. He was elected Fellow of the Royal Society, Foreign Member of the National Academy of Sciences of the USA and is an Elected Member of three other national academies.  He holds 13 honorary doctorates from 8 different countries and was knighted in 1992.

Michael is a physicist.  And a mathematician. But he is a unique blend of the two, a blend that defies all classifications. What I would say is that Michael intensively uses sophisticated mathematics to discover fundamental aspects of Nature. And, as you can imagine hearing about all those awards, he did quite a lot of good science!

It is customary on such occasions to tell you in some detail what he discovered. I won’t do that. In the present era, you can find that out for yourself with just a few clicks. I will rather focus on the person behind the science. There are, of course, many very different ways of doing great science – here’s Michael’s way:

Michael loves to play. The first time I visited his house I was delighted to see gadget after gadget: a levitating top, three silvered spheres that reflected light onto each other in intricate patterns, a traditional Chinese magic mirror, a rocking chair that moved horizontally, in defiance of the usual circular motion of other rocking chairs or swings, and many more. Michael had the greatest pleasure in explaining to me what they were and how they worked – the pleasure of playing with them and also of understanding deeply, mathematically, what they are doing. And his success in science starts from here.

Every era has its great scientific questions - issues that everybody agrees are of fundamental importance for scientific progress. Issues that a majority of researchers jump upon. But Michael is a nonconformist. When he sees everybody going in one direction, he goes in another. And going his way, playing with things and with ideas, not being afraid that they might sound to others not important enough, he generated entire new scientific areas: the study of geometric phases (the so-called Berry phase), singular optics and quantum chaos. Thousands of researchers are now following his steps.

In thinking of a problem, as I’ve seen him doing many times, Michael loves to solve special cases, in all their detail. Then, sometimes in a blink of an eye, he generalises them to sweeping concepts. And there is beauty in the mathematics of the details, beauty that makes Michael happy … and there is power in the generalisations, power that has made so many other researchers study them ever since.

Michael is not a group builder or a group leader. He likes to do science by himself, not to administer others in doing it. The pleasure is in him finding things out, not making others find them out for him. He most often works by himself, sometimes with one, maybe two collaborators. But the results he has obtained generated a much larger, worldwide group, which was inspired by them and is working now in the same direction.

But it is not only his scientific achievements that are being recognised today. Michael made significant contributions to the scientific community and to the advancement of science in general. He is a member of more committees and councils than you could imagine, advising on scientific directions, helping select worthy people for grants and positions and nurturing their careers, and inspiring the public at large.

Closer to home, our University was established a little over one hundred years ago. For half of that period Michael has been here.  He is part of both its furniture and of its soul. During this time, he has brought enormous distinction to the institution.  As he criss-crosses the world, answering with equal pleasure invitations to visit the most famous universities in the world such as Harvard, Stanford and Princeton, as well as humble universities in obscure places all around the world, Michael is a tireless ambassador and a great advocate for Bristol.

Last but not least, no portrait of Michael would be complete without mentioning his science for art prizes, one given by Novartis/Daily Telegraph and another by Louis-Vuitton Moet-Hennessey (I wonder what he received as a prize from the latter!). And, of course, his famous IgNobel Prize, a prize that honours achievements that first make people laugh, and then make them think, a prize which celebrates the unusual, honours the imaginative and spurs people's interest in science, which he received together with his friend, the Nobel Prize winner Andre Geim for levitating frogs! (Actually it was Andre that levitated them using his extremely strong magnets; Michael gave the theoretical explanation of what was happening.) As far as I know, no animal was hurt in that experiment, and Michael said he is ready to try being levitated himself, if only one would have a big enough magnet. Such a magnet doesn’t exist yet – but we levitate him with our admiration.

Vice-Chancellor, I present to you Professor Sir Michael Berry to receive the distinction of Honorary Fellow of the University of Bristol.