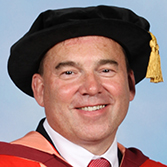 I remember as a young boy reading a cartoon strip detailing the consequences to your whole body if a single organ went on strike.  Now is neither the time nor the place to describe to you the contents of the cartoon strip but they definitely appealed to my puerile sense of humour and you never know, may have been what set me on the path to becoming a doctor.  I can’t remember if there was a description of what happened if your feet went on strike but I can reassure you that the consequences are dire, as anybody who has had acute foot pain can attest.  A clinician who can relieve such distress becomes a very popular person. Our honorary graduate today, Steven George West, qualified and practiced as such a professional, a podiatrist, for many a year whilst on a journey to becoming the Vice-Chancellor of our sibling university here in Bristol, the University of the West of England or UWE as it is colloquially known.  I may be the first Obstetrician to become a Vice-Chancellor but I will bet my bottom dollar that Steve is the first podiatrist so to do.  So how did this happen?

Steven was born in Luton in 1961 and experienced a happy childhood in a loving family with a father who had a very strong work ethic.  He was educated locally where he says he received the kind of school report which says “tries hard but struggles”. I’m not so sure how close to the truth that is as he was deputy Head Boy at school and Vice-President of Luton Sixth Form College.  He also swam for the county but at the age of 16 he says he discovered the opposite sex and 60 lengths of the swimming bath before 7 am every morning somehow lost its appeal. That selfsame discovery may also have been a motivation for him taking up amateur dramatics at college.

His A levels took him to the Chelsea School of Chiropody where he threw himself into more amateur dramatics and generally having a good time.  This all ended when he was interviewed by the Principal who advised him that his current strategy of activity was not exactly taking him along the road to his stated ambition of teaching and research in chiropody – entertaining though that strategy was!  Steve listened to what he said, buckled down and worked hard, eventually qualifying top of his class and started working as a clinician at Barts.  He enrolled on the new BSc in Podiatry at the Polytechnic of Central London and studied there one day a week from 9 am to 9 pm.  He eventually graduated and was the first podiatrist ever to receive a first class honours degree in the discipline.  He rapidly became the youngest ever Fellow of the Society of Chiropodists.

He went on to start a PhD at Kings College London in diabetic foot ulcers and worked his way up the academic ladder with a Lectureship and then Senior Lectureship before being appointed as Head of the School of Podiatry at the University of Huddersfield at the tender age of 28.  As well as all of this academic success, Steve did a surgical pupillage for 3 years at the London Foot Hospital.  He did real operations including osteotomies for bunions – let me tell you, an osteotomy is no small procedure.  This leads me to further speculate that Bristol must be the only city on the planet which has surgeons as both its university leaders!  And a jolly good thing, I say.

Steve was rapidly appointed Dean of Health and Behavioural Sciences at Huddersfield and after three years was appointed Dean of Health at UWE, a Faculty which was then the largest Health Faculty in the land.  Mind you, they did things properly then – Steve was interviewed by 33 people over four days including our then Deputy Vice-Chancellor, Brian Pickering.  Perhaps as a portend of things to come, Brian asked him what he thought the two universities could do together.  His very successful tenure as Dean led to his appointment in 2005 as Deputy Vice-Chancellor and finally, in 2008, as Vice-Chancellor at the age of 46.

So, you have heard the bare bones of a very successful career but why an honorary degree from the University of Bristol? We must start with his leadership of UWE.  He took over the reins at a time when UWE had faced some considerable challenges which had severely dented their confidence. With calm assurance, he steadied the ship and set about redefining its strategy and its place in the higher education world.  Six years later, it is a successful and flourishing university and one of the very best in that group which have been chartered since 1992.  UWE combines important vocational education within a broader educational waterfront and works within the local region to ensure the higher skilled workforce essential for our success.  It is vital to the people of Bristol in that nearly 50% of its students come from the Bristol/Bath region – the same figure for us is less than 10%.  However, 50% of its students are also prepared to travel from all over the country to be educated there.  This is combined with focussed research in particular areas, an example of which, is the world class Bristol Robotics Institute.

This success with his university was matched by extensive leadership positions in UK higher education.  These are too numerous to articulate today but is exemplified by him being appointed Chair of the University Alliance in 2012. This is a mission group of 22 universities and very strongly sets the agenda for higher education broadly and particularly for its segment of the sector.  I can reassure you that Steve is highly regarded in Westminster and Whitehall.

But he never forgot his beginnings. He has held numerous senior roles in health.  In particular he was Chair of the Council of Deans of Health and a non-Executive Director of the Strategic Health Authority.

Perhaps most impressive about Steve, is his complete commitment to the City of Bristol. He and I have a golden rule which is that it is the duty of both universities to work as much together as possible in whatever will benefit our city.  Steve has taken numerous roles within Bristol and in 2013 he was made President of the Bristol Chamber of Commerce – a Vice-Chancellor as President of the Chamber of Commerce?  That must surely be a first.

Many in the sector are very envious of the relationship we have between the two universities and between him and me.  That is because we both believe that each and every university is equally valuable, that we are giving different opportunities to different groups of people but those opportunities are equally transformational.  It is said that the great skill of the English is to turn diversity into a hierarchy – these two universities embrace diversity and do not embrace hierarchy.

Finally, what of Steve - the man? He epitomises the phrase value driven – his university, his discipline and his city come a long way before any thoughts about Steve West.  Presumably his family see that sometimes and I know he would be the first to acknowledge how important they have been in supporting him and we are delighted to welcome his wife Samantha here, accompanied by his daughters Becki, Emma and Bethany. It’s especially pleasing to welcome Becki - who is a medical student at the University of Bristol – and no, money did not change hands, it was her talent that brought her here.  For me Steve is open, welcoming, supportive, wise and insightful.  He also has a fantastic sense of humour, which makes me look forward greatly to our monthly one to ones. I’m not sure how much business we get done but we certainly laugh a lot. I know that he is deeply respected and loved (as much as a Vice-Chancellor can ever be loved) within his university.

Madame Chancellor, I give you Steven George West, a man I am proud to call both a colleague and a friend, as eminently worthy of the degree of Doctor of Laws, honoris causa.