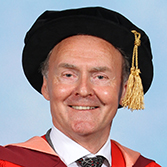 Today, it is my privilege to present to you Professor Sir Mark Welland, a pioneer of nanoscience.  Nanoscience and its application in nanotechnology are revolutionising not only our understanding of the world but also, indeed, our world itself.    The applications of nanoscience are flourishing in medicine, information technology, energy production and storage, materials science and manufacture, in food, water and the environment, and in security. The age of nanoscience and technology was born once the enabling tools had been invented: The Nobel Prize winning scanning tunnelling microscope and the atomic force microscope, enabling us to visualise and manipulate matter at the nanometer and atomic scales.

Sir Mark was a PhD student at the University of Bristol in the Microstructures Group of the Physics Department and this was when I first met him in the 1980s, at the electron microscopes. This was actually the year before the invention of the scanning tunnelling microscope.  It was also in the Physics Department that Mark met his future wife Lyn, also a postdoctoral graduate of University of Bristol in Physics and she is in the hall today along with their four children including daughter Alicia, who also recently graduated in Politics from Bristol.

With extraordinary prescience, on leaving Bristol, Sir Mark started his career in nanoscience and nanotechnology at IBM Research Laboratories, Yorktown Heights, USA, where he was part of the team that developed one of the first scanning tunnelling microscopes. In 1985, appointed to a Lectureship in Electrical Engineering at the University of Cambridge, he set up the first tunnelling microscopy group in the UK and in 1991 he began the nanoscience research group.

In 2001, Sir Mark was awarded a prestigious grant from the EPSRC for nanotechnology This was the £10M Interdisciplinary Research Collaboration (IRC) in Nanotechnology between Cambridge, Bristol and UCL.  Recognising the unique environment required for nanoscience, both physically and culturally, each university constructed a highly-specified building to facilitate cutting-edge nanoscience research. Mark played a crucial role in  Bristol’s Nanoscience and Quantum Information Centre, formally opened in 2010 by Nobel Laureate Professor Heini Rohrer, which is world-leading and a flagship of the university. In Cambridge, Sir Mark established the purpose-built Nanoscience Centre in 2003, which under his continued directorship has inspired a broad range of both fundamental and applied problems.  These include protein mis-folding problems related to human diseases such as Alzheimer’s Disease, nanostructured materials for high efficiency low-cost solar cells, biologically inspired nanomaterials for green technologies and nanoelectronics for future generation communications and sensing. He inspired an exciting interdisciplinary programme of research, whose highly successful legacy has been far reaching, and Mark has substantive international leadership and advisory roles in the USA, Japan, Europe, India and the Middle East.

Sir Mark’s next role was truly formidable:  From April 2008 until May 2012, he was Chief Scientific Adviser to the UK Government Ministry of Defence, where his responsibilities included chairing the Investments Approval Board and the Defence Research and Development Board, acting as UK Principal for the US-UK 1958 Mutual Defence Agreement (nuclear), providing scientific advice across Defence and working on cross-Government science issues.

In April 2011, in recognition of Sir Mark's contributions to the 1958 MDA partnership and his leadership and vision in all areas of WMD Defence, he was presented with the US Secretary of Defense's Award for Exceptional Public Service. The award is one of the highest awards the Department of Defense can present to a representative of another Government.  Also in April 2011, in recognition of his outstanding leadership, wise counsel and his significant contribution to the interests of the United Kingdom and the United States, he received the National Nuclear Security Administration (NNSA) Gold Medal for Distinguished Service. The NNSA Gold Medal is the highest medal awarded by the NNSA.

Sir Mark has taken part in many television and radio programmes for the BBC, SKY, the Open University and the University of the Air, Japan. He has also written articles for the Guardian, FT and The Times in the UK which have had a major impact on the public understanding of science.  As part of a long-term commitment to engaging with schools across Europe, Sir Mark designed a short DVD film (narrated by Stephen Fry and translated into 12 languages) that won the Science Short Film of the Year at Scinema 2010 and is one of the most popular University of Cambridge videos (over 300,000 hits!).

Today we celebrate a truly remarkable career.  Sir Mark has demonstrated exceptional scientific leadership, not only in Britain, but throughout the world; he has undertaken major roles at the highest level for our nation; and through all of this he has maintained a very special relationship with the University of Bristol, for which we are most grateful.

Mr Pro Vice-Chancellor, I present to you Professor Sir Mark Welland as eminently worthy of the degree of Doctor of Science honoris causa.