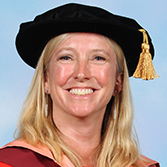 The award of an honorary degree at the University of Bristol recognises “genuine achievement and distinction in an activity consonant with the mission and values of the University” while also seeking to celebrate individuals who are “of sufficient standing professionally and personally to be an exemplar to undergraduate and postgraduate students and to their families”.

It is hard to imagine many people who so clearly meet both of these criteria than Roz Savage.

For those of you who are unfamiliar with Roz’s extraordinary life, her achievements include holding four world records for ocean rowing, including being the first woman to row solo across all three of the Atlantic, the Pacific and the Indian oceans. She has challenged herself both physically and mentally in ways that very few mere mortals could begin to understand.  Roz has also made the protection of the environment her cause – one that she supports wholeheartedly through a range of initiatives.

But, in my view, none of these accomplishments – about which I will say more in a moment – represent what is most extraordinary about our honorary degree recipient. What I think most distinguishes Roz, and makes her particularly worthy of our recognition today, has been Roz’s willingness to look long and hard at herself and to ask the difficult and challenging questions that many of us go to great lengths to avoid particularly as we grow older.  Even more remarkably, after asking and answering those difficult questions, Roz had the determination, resolve and courage to actually do the things that others just talk about - when it would have been infinitely easier to simply continue on the track she was on.

Where did this all begin?  Roz was born in Cheshire in 1967. The daughter of two Methodist ministers, Roz changed schools each time her parents moved churches.  Given that she rarely had the same group of friends for more than three years she learned to be comfortable in her own company.  Roz ‘s childhood was austere, growing up in various church houses and wearing second-hand or homemade clothes to school.  Her mother grew fruit and vegetables to stretch the house-keeping allowance.  Growing up, she was conscious that her life was different from others, that her family lacked the finer things in life. She resolved to make a different future for herself.

At first, everything went to plan.  Roz read law at Oxford where she also earned two half-blues for rowing – a skill that clearly has come to serve her well in later life.

After graduation, Roz settled into an apparently enviable life, working as an IT project manager, first in management consultancy and then for an investment bank.  Her goal was to earn lots of money and she proceeded to do just that. In 1996, in her late twenties, she married her long-term boyfriend and life seemed perfect.  With a wardrobe full of designer clothes, a red MX5 sports car, and expensive foreign holidays Roz wanted for nothing. She and her husband lived the high life, which culminated in 2001 in the purchase of a beautiful and expensive Edwardian house in Kew.

And yet, somehow, despite all of this, Roz wasn’t happy.  After 11 years as a management consultant, aged 32, she drafted two versions of her own obituary.  The first, the fantasy obituary, was the one she wanted to have – it described the life of an adventurer, a risk-taker, a person eager to embrace new experiences who defied all attempts to be pigeonholed.  Roz says that once she started writing it was as if she had opened up the floodgates – she could barely scribble quickly enough to capture this vision of herself. The real Roz was emerging on paper before her eyes, revealing the type of person she wanted to be.  As she describes it, the true Roz was asking to be released, to be free.  To be someone who was not slowed down by fear, who was no longer imprisoned by the view formed in adolescence of what happiness and success looked like.

The second version was the obituary she was headed for.  A conventional, ordinary life, pleasant and with moments of excitement but always within the safe confines of normality.

This simple exercise was Roz’s first but ultimately irrevocable step on a path that would ultimately take her away from all that she had held dear.  Over time, her competing obituaries led to a series of decisions that moved Roz further and further away from her comfortable and prosperous life.  Once she admitted to herself that she wasn’t happy, she challenged herself to make the changes needed to make herself happy.  And this is what I think is the most extraordinary thing about Roz’s life.  As brave as Roz has been in all the challenges that she has taken on since then, I think that the most courageous thing that Roz did was to take charge of her own destiny and to be willing to make dramatic changes in order to follow her dream.  Little by little, she began to realign her life; to put herself on track for the obituary she wanted.

Roz describes this period as evolution, not revolution. One by one, she shed the trapping of her old life – the job, the home, the fancy clothes, the expensive holidays, and the little red sports car.  Her growing urge to fundamentally change her life inevitably put pressure on her marriage and, with deep regret, she separated from her husband.   By this time, she had left a great deal behind and taken a leap into the great unknown. There was only one problem: she didn’t yet know where she was headed. Free, yes, but free to do what?  Roz describes this time as having jumped out of an aeroplane before you’ve finished constructing the parachute.  As she says, this tends to focus the mind.

Having stopped her old way of living, Roz tried on various other lifestyles for size.  And around this time ethical ways of living began to fascinate her, partly in response to her Methodist upbringing and partly from examining her abandoned career.  Living a simpler life helped Roz to develop a deep passion for the environment and an understanding the custodial relationship that humans have with the earth.  She felt a need to raise awareness of environmental issues and to do so in a way that was neither evangelical nor patronising. At the same time, she was seeking a personal challenge, an adventure.  And one day in 2004, almost out of the blue, she came up with the surprising idea that she should row across the Atlantic to raise awareness for environmental issues.

She began to compile a long and detailed to-do list of all the things that she would need to read, learn, finance, buy and otherwise to do prepare for an ocean row.  Initially sceptical, she broke the list down into such small steps that she realised that there was no single thing on the list that was too far beyond what she was capable of doing.   So certain was Roz that this was the right thing to do that she did the unthinkable.  She obtained some sponsorship funding and invested her remaining life savings to buy an ocean rowing boat and signed up for the 2005 Atlantic Rowing Race.  She had 14 months to prepare and prepare she did.  Roz trained very hard, rowing in the gym and running every day, planning her food and figuring out how she would cope alone during the long, dangerous race.  Towards the end of her training she was at intervals clocking up 16 hours per day on the rowing machine. She pictured it as a romantic, exciting personal journey.

Roz was the only solo female and the race, from the Canary Islands to Antigua, revealed itself as far more dangerous and gruelling than she had imagined.  In fact, the voyage was fraught.  She rowed for twelve hours each day, in three-hour shifts.  The first of her four oars broke 12 days from the start.  The second went three days later.  Before half of her journey was complete, all four had failed.  Savage improvised a serviceable pair by lashing sections of her boathook to them with duct tape.  Her camping stove broke, and both her stereo and her satellite phone stopped working along the way.  She rowed through the tail end of a hurricane, at times facing 30 foot waves.  Physically it was tough but psychologically, the 103 day journey was even tougher.  But no matter how hard it got, Roz always believed that the only thing worse than carrying on would be to quit.  Six of the 26 crews had to be rescued after their boats capsized or sank and didn’t complete the race.  Roz arrived safely in Antigua, finishing last by 19 days, but she didn’t care – at least she’d completed it.

Roz then had a problem.  Once you’ve rowed single handed across the Atlantic Ocean, what do you do next….? If you’re Roz Savage you announce that you’re going to become the first woman to row singlehandedly across the Pacific.  After one false start, Roz made another attempt in May 2008 and completed the voyage in three stages over three years, in 2008, 2009 and 2010.

Next to come was the Indian ocean – thereby presenting the opportunity for Roz to complete the ‘Big Three’ – the Atlantic, Pacific and Indian oceans.  Her route was kept secret due to the risk of pirates and, despite various setbacks and challenges, Roz completed the row on 4 October 2011, becoming the first woman to complete the ‘Big Three’ solo.

As you might have imagined, Roz has not rested on her laurels since then. She has continued to campaign actively for the things she believes in and has been recognised for her contributions by a myriad of organisations: she is a United Nations Climate Hero, a Fellow of the Royal Geographical Society, and an International Fellow of the Explorer’s Club of New York. She has authored two inspirational books describing her journeys across the Atlantic and the Pacific oceans and in 2010 she was named Adventurer of the Year by National Geographic. In 2013 she was named a Member of the Order of the British Empire (MBE) in the Queen’s Birthday Honours.

I hope that as graduates about to embark on your own adventures you will remember and be inspired by Roz’s courage, be willing to challenge yourself and others, and have the courage to define for yourself what success means. And remember that most apparently insuperable challenges will feel doable if you break them down into bite sized pieces.

I think that she has put it best herself so I’ll close with a quote from Roz:

Mr Vice-Chancellor, I present to you Rosalind Savage as eminently worthy of the degree of Doctor of Laws honoris causa.