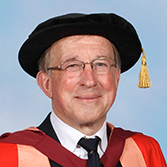 Bob Reeves, as he is universally known, has a plausible claim to have presented more candidates for Bristol honorary degrees than anyone else in living memory.   If so, it is high time that he had a taste of his own medicine.   But that is not why he stands before us today.   Nor is it because he has given forty years of devoted, energetic and imaginative service to this university.   For the remarkable fact is that he has somehow found time and energy to make important contributions to many sporting and charitable activities in Britain and abroad, culminating in his successful year, just completed, as President of the English Rugby Football Union.

Bob was born towards the end of WW2 in Preston, Lancashire, and went to the local grammar school, where he seems to have been an apt pupil, a real all-rounder, successful in the classroom, an accomplished musician, and adept at all the sporting activities offered.   His father died when he was 15, but he was very close to his mother, who much later came to live with him in Bristol.   He played soccer, rugger, tennis, golf, but cricket was the game at which he excelled.

I should like to tell you, Mr Vice-Chancellor, that he was a fiendish slow bowler, because it might suggest an explanation of his aptitude for university politics, but truth compels me to admit that he was a formidable left-handed batsman.   In due course he played county cricket in the second eleven for Lancashire, and later also for Gloucestershire.

With this sporting background Bob decided to go on from school to Loughborough, then as now the best place to study physical education, and to qualify as a PE teacher, in which capacity he spent happy years at the Royal Lancaster Grammar School.   But he realised that the possibilities, even at such a fine school, would be limited.   PE teachers were regarded as fair game for teaching other subjects, and perhaps being required to teach mathematics was the last straw; the turning point in Bob’s career came when he saw an advertisement for a vacancy on the sports staff at this university.

Lancashire’s loss was Bristol’s gain, as in 1972 he took up a three year contract as an Assistant Lecturer in Physical Education.   For most of the time from then until now, he has been Mr Sport in the University.   If you who have graduated this morning have enjoyed the facilities at Coombe Dingle, and in the new Sports Centre on Tyndall Avenue, you have mainly Bob Reeves to thank.   Despite continual cuts to university funding, his initiative and determination have made remarkable improvements, which still continue.

If this university has a single watchword, it is ‘excellence’, and Bob encouraged the highest levels of achievements in every sport, notably by setting up the Advanced Sports Squad which has the best athletes from many different sports training together.   But he insisted that those sportsmen and women were at the University to study, and even a world cup winners medal was no excuse for academic failure.   Conversely, he insisted that sport and exercise were not only for the fittest, but that every student could and should benefit.   He established a Masters’ programme in Exercise and Health Sciences, the first in the UK.

From early in his time here, Bob saw the advantage in taking teams abroad in the vacations, and he used these tours to build bridges with other countries.   Kenya was a particularly favoured destination, and so strong were the links he forged that Bristol acted as hosts for the Kenyan team before the 2012 Olympics.   He became heavily involved with the charity TUSK for animal conservation in Kenya and Tanzania.

In a similar way, the annual skiing trips which Bob led to the Dolomites resulted in his raising funds to help the victims of the L’Aquila earthquake in 2009.   In fact, wherever Bob goes new relationships are established, sporting activities flourish, and quiet help is given to those in need.

And in all this, Bob enjoys himself, and those he works with enjoy themselves too.   He is a generous host and a bon viveur, among other things an active part-owner of a vineyard in the Maconnais which produces a fine Pouilly Fuissé.   The phrase ‘wine, women and song’ would not be totally inapposite.

And talking of vintages, this has been a good year for the English Rugby Football Union under his presidency, winning the Triple Crown for the first time for many years.   Bob, who is a fine Rugby coach, would modestly decline credit, but sporting bodies, like universities, reflect the values of their leaders.

Mr Vice-Chancellor, it is with confidence and pleasure that I present to you Robert Anthony Reeves as eminently worthy of the degree of Doctor of Laws honoris causa.