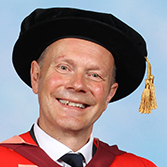 It is rare to find someone that migrates seamlessly from a cutting edge scientific career into shaping some of the most persuasive and moving content we hear on our radios and see on our televisions.  Julian Hector’s career exemplifies such a journey, and it is his curiosity and creativity that make him eminently worthy of the honorary Doctor of Science for which he is being presented today.

Julian joined the University of Bristol in 1978 as an undergraduate from Bedford Modern School, to study Zoology.  But even at that stage, he did not confine his interests to academic study alone.  A terrestrial existence was far too limiting, and Julian fired his curiosity and daring by exploring both under the sea – with the sub aqua club – and in the air – with the University Air Squadron.

Coming towards the end of his undergraduate period, Julian’s attention was drawn by an advertisement for a sea bird ecologist with the British Antarctic Survey, working in South Georgia.  South Georgia is not just remote, it is part of a group of unpopulated British islands 1400 km from the Falkland Islands.  Travelling South, Julian embarked on an audacious project to study the environmental controls of breeding in albatrosses on the aptly named Bird Island.

The work  - with Professor John Croxall from BAS and Sir Brian Follett from Bristol - was pioneering and uncovered why albatrosses breed only every two years, rather than every year.  It was also one of the first examples of ‘big data’ approaches in biology.  John Croxall remembers Julian’s commitment and skill as a scientist, as well as huge enthusiasm and versatility.

But the work was not without challenges – Julian’s research also coincided with the Falklands War, which led to the four-man team being stranded on Bird Island with a 45 gallon drum of dried cabbage left by previous expeditions, as the Argentinians occupied South Georgia.  Rescue came in the form of the Royal Navy, who fortuitously transported the team back to the UK.  Sir Brian Follett recalled that the first he heard of these adventures was Julian walking into the Bristol lab with a smile, and still bearing his precious frozen blood samples!

Julian soon decided that although a career in research held wonder and promise, his path was going to be into teaching and media.  While in the Antarctic, he had the sublime experience of hearing a tawny owl’s call over the World Service airwaves.  It was that desire to reach people through the making and sharing of rich, inspiring stories that prompted him to change tack.

After spells in conservation organisations and universities Julian’s full time move into the BBC Natural History Unit came in 1993, where he was offered a job as a producer.   Here – putting the puzzle pieces together – Julian was able to satisfy his voracious appetite for knowledge and his desire to try things that had never been done before.

Sir David Attenborough, himself a recipient of an honorary degree from this university, and with whom Julian has worked on numerous projects, has described Julian as ‘one of the most inventive producers in radio’.  Julian brought live natural history programming to Radio 4, followed by another pioneering programme that linked locations live from the Arctic to the Antarctic along the Meridian. These were followed by well-known and loved series such as ‘Migration Live’, ‘World on the Move’, ‘Saving Species’ and ‘Shared Planet’, progressively connecting the natural and human environments to tackle questions of conservation and social justice.

Gwyneth Williams, Radio 4 Controller, echoes – “Julian is someone who has a real authority in and feel for his field.  I have often turned to him for inspiration and broad cross-disciplinary thinking”.  ‘Tweet of the day’ – a programme that begins with a call or song, followed by a story of fascinating ornithology inspired by the sound, is a recent, award-winning programme. Wendy Darke, Head of the Natural History Unit said, “Only Julian could have persuaded Radio 4 to give birds a voice just ahead of the BBC’s most influential news programme, Today.  Tweet of the Day puts the natural world smack bang in the middle of the news agenda – before John Humphrys!    Julian’s broadcast work and his leadership allows audiences to make the connection between a flourishing living world and our responsibility to it; his work brings the elegance of ideas and the joy of nature to millions in the UK and world-wide.”

As we all know, broadcasting is an ever faster-evolving field.  Natural history is moving onto giant screens and into cinemas; on TV, the challenge is finding new ways to present the interactions of people with the natural world.  Julian brings an immense energy, enthusiasm and drive to keep telling these important stories in more inventive ways.  We are delighted to welcome three of his children as well as his wife Mary here today to celebrate his achievements with him.

Mr Deputy Vice-Chancellor, I present to you Julian Alan Lowther Hector as eminently worthy of the degree of Doctor of Science honoris causa.