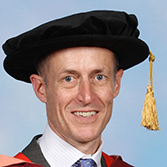 Robert was brought up in lots of places in his formative years, as his father was in the army.  From the age of around 12 Robert grew up in Kent, although he was born in Kenya.  He was six months old when he left Africa and so, as Robert comments, it’s more or less just an interesting thing on his passport. He was also very close to his paternal grandmother, who grew up in Bristol and who graduated in Science from Bristol in 1924 and so Robert has had a long and deep connection to both the city and the University from an early age.  His grandmother was immensely proud that he went to Bristol, where he came to study law. He cites Bristol as having given him so much and as being a terrific platform from which to build his career – enabling him to be an independent thinker. Many good universities enable their graduates to see and understand things – Bristol enables its graduates to also see the things that aren’t there.

Robert has always had a love and appreciation of the arts.  He recalls that his starring moment at Bristol’s students’ OpSoc was as Tim in Salad Days which, through a twist of fate, led to him performing in front of the musical’s creator Julian Slade, who had come to see his niece - who was playing Robert’s mother. To this day Robert remains an active choral singer – as well as a climber.

He hadn’t set out to be a lawyer.  He wanted to read law as it was a new subject to him and something that he had yet to study and his idea was to complete this and then go off and do something different, having completed a stimulating and challenging time at university.

As with many careers, the something different didn’t happen straight away and Robert found himself embarking on a career in Law which, although he was successful, it didn’t fulfil him completely. Meanwhile, his voluntary activities in fundraising for education and the arts was becoming increasingly stimulating and at a time, in New York, when the fundraising profession was really making its mark and setting the trend for others to follow.

Robert returned to the UK with the plan to become a fundraiser.  While no immediate concrete role materialised immediately, Robert did manage to secure a position as consultant to advise on fundraising.  This gave rise to various roles and opportunities which then led to Robert’s role at Arts and Business, or the Association for Business Sponsorship of the Arts, as it was then called.

The organisation, which originally started as a way for business to sponsor the arts, was successful at brokering relationships between arts and business organisations and supporting a mutually beneficial transfer of skills and experience between the two.  As Robert says, the world has now moved on from where business viewed arts largely as something which could enjoy its patronage, to one where business recognises it has as much to learn from arts and that a symbiotic relationship is preferable to patronage.

Robert’s role included driving sponsorship for arts organisations as well as account managing a range of companies to ensure that their relationships with the arts were providing maximum benefit strategically and across the organisation – as Robert encapsulates, ensuring that the arts activities in which the organisations became involved were no longer predicated on the basis of particular likes or dislikes of the chair or CEO.

Crucially, Robert’s time at Arts and Business provided a perfect transition whereby the world of art and the world of business came together, enabling Robert to morph from his commercial background.  Looking back, it is perhaps not surprising that this transition took place as, as Robert puts it, he spent a significant amount of his free time when in law, both in New York and in London, volunteering within arts organisations.

His next appointment was as Head of the National Heritage Memorial Fund, whose focus was primarily on saving national heritage.  Just before Robert took up the post he was told that not only would he be responsible for the existing National Heritage Memorial Fund, but also would be a member of the senior management team of the Heritage Lottery Fund. It is almost 20 years since the Lottery began, back in November 1994 and Robert joined on 2nd January 1995 – which was the first day that the Heritage Lottery fund accepted applications.  On day one, six grant applications were received – which was just as well as they employed at this time six grant officers, so no one had to share.  The next day, they received 83 applications, such are the vagaries of the postal service at the beginning of the new year and from that point the flood gates opened.  As Robert puts it, the organisation was wholly unprepared for the degree of uptake.

One of the things Robert cites as being most proud of during his time in the organisation was in persuading it to move into community heritage programmes.  This was a significant change, moving them from, as Robert puts it, the polite end of heritage, to the grass roots community-based end of the spectrum.  This resulted in the ‘Awards for All’ scheme which transformed the landscape of heritage activity by enabling communities to take charge of their own heritage and how they interpreted it – basically thinking of heritage in a completely different way.  Fast forward to today and the idea of community heritage is now completely embedded within the narrative of the Heritage Lottery Fund.

Robert remained and remains active in advising organisations on fundraising, despite the fact that it has yet to be his main, paid role. But, being passionate about making a difference and in particular about advising at the top level within organisations on how professional and strategic fundraising can really shift the agenda - is something he feels he must just do.

Closely linked to this passion is his drive to ensure that the arts is not side-lined from the agenda.  It is one of the biggest economic imperatives within the UK and yet ministers still talk about science and technology as if they are first, with arts coming second – often a long way second.  Robert is keenly focussed on redressing this imbalance in thinking and perception.

In Robert’s view, the arts has a profoundly important role to play in society and, crucially, from a young age.  With the pressures on the curriculum at school level and the increasing vagaries of approaches as more schools move to academy status, Robert believes that arts organisations have a direct role to play in ensuring that the arts form part of the learning experience.  Ultimately, Robert, as do many, believes that an interaction with and appreciation of the arts is fundamental to what makes us human – and that this shouldn’t be left to chance or to privilege.

A belief which underpins his most recent role. Robert feels that his role at the Heritage Lottery fund was one of those ‘great roles’ that one is sometimes lucky to have as part of a career.  He didn’t think this would ever be matched, let alone eclipsed. Enter the Paul Hamlyn Foundation.

From 2004 to 2013, Robert was the CEO of the Paul Hamlyn Foundation, which has now become one of the largest and influential grant-making organisations in the UK, operating in the arts, education, social justice for disadvantaged young people, and also in India.

Robert’s role was both immense and transformative.  His mission was to take the foundation, which was at the time still very much a personally or family run foundation, into something which was far broader in its thinking. This coincided with a phenomenal injection of cash following Paul Hamlyn’s bequest to the foundation, which equated to nearly 9/10 of his estate.  This at once changed the whole landscape and Robert had to ensure that the privilege that this gave to the foundation was deployed to the best effect.

As sometimes happens in life, serendipity plays a part.  Robert didn’t apply for the role when it was first advertised.  However, they failed to appoint and so when it was advertised again, a number of people strongly suggested to Robert that he should apply – he is very glad that he did.

Robert very quickly saw the potential the foundation had to build on its successes and to broaden its purpose and activities and, in doing so, to really push the value of helping young people from disadvantaged backgrounds to be core and explicit to the foundation’s mission.  During this time Robert strengthened the foundation’s board and staff to support the bringing about of change. Throughout this process, Robert was acutely aware that the foundation was in a rare position – it was in charge of its own timeline and its destiny with little external pressures.  Robert was keen therefore that the foundation focused on addressing longer term issues – a privilege, as he puts it, that few organisations have the set up and ability to do.  This meant that Robert was able to ensure that the foundation was genuinely able to act as a catalyst for social change. As Robert modestly puts it, he was able to address the cause and not just the symptom.  Under Robert’s direction the Paul Hamlyn Foundation has become a national leader amongst grant-making foundations for transparency and accountability.

Robert is currently a ‘pracademic’ – a new term that describes someone who is both practitioner and, in essence, teacher and researcher.  As Senior Visiting Fellow and Visiting Lecturer in the Centre for Charity Effectiveness at Cass Business School, he is taking the time to reflect on his own practice through research as well as impart his wealth of knowledge and experience.  Robert sees this as an opportunity through his reflection, as a way for him to transition to the next thing.  This may involve the arts and or education.  Clearly, whatever the next thing is for Robert, he will continue to make a difference, just as he is continuing to make a difference through the huge benefit which he gives to organisations as a volunteer, often in leadership roles as a member of the board of trustees.

Robert’s career, perhaps, his raison d’etre, stands for a selfless passion to make a difference and to address the cause, rather than the symptom. He thinks of others’ needs, rather than his own. He is an example to us all.

Mr Vice-Chancellor, I present to you Robert Dufton as eminently worthy of the degree of Doctor of Laws honoris causa.