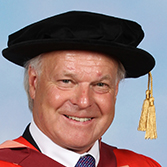 Different people react differently to disaster. There is no right or wrong way to deal with a personal calamity. Some turn to others for support. Others turn in on themselves. Occasionally someone takes such an experience and turns it into something quite remarkable, something unique and inspirational, something that can last a life time, even define a life. Steve Dayman is such a man.

Steve and his wife Gloria were confronted by catastrophe in 1982. Their 14 month old son Spencer fell ill with blood poisoning and meningitis caused by a bacterium called Neisseria meningitidis group B - usually just called MenB. The disease progressed rapidly and 24 hours after reaching hospital in Bristol, Spencer was dead. Paediatric intensive care has come a long way in the intervening 32 years, but regrettably, this still happens. Thanks, in part to Steve, it's getting rarer and the day is in sight when it will be a thing of the past.

Steve - as I think Gloria and his children here today will confirm - does not habitually expose his feelings in public. But he has described the moments after his son's death in the following words:

"I held Spencer in my arms. The devastation and emptiness is something I can never forget. Only parents who have been through a similar experience can imagine the pain this terrible disease causes. Spencer's death has completely changed my life."

When Steve decided to find out more about the illness that had taken Spencer, he was astonished by how little people knew, including the medical profession. Realising there was important work to be done, he channelled his energy into developing and providing better information and peer-support to other similarly affected parents. From a mobile office in the parking area of the family haulage business, he started raising money and contacting families.

Steve was well ahead of the curve in understanding how the media could and would willingly help. The voice of a parent who has lost a child and is willing to talk about it has great resonance. This was not just about raising money, but about improving recognition and early diagnosis too. Steve helped to raise awareness of the "non-blanching" rash - which does not disappear when pressed with a finger or under a glass, appearing on "That's Life" in 1994 to describe it.

But at the same time as medical researchers were realising that deaths and injuries from meningitis and septicaemia were not going to be prevented simply by prompter recognition and earlier treatment, so was Steve. What was needed was research - to find better treatment but, above all prevention, prevention through immunisation.

The triumph of vaccines over meningitis began properly in the 1990's with the implementation of the Hib vaccine. One of the commonest causes of childhood meningitis disappeared rapidly. Most younger pediatricians today have never seen a case of a disease that was one of the grimmest fears of my training years in the 1980's.

Steve raised half a million pounds to refurbish what became the Spencer Dayman Meningitis Laboratories - on C floor of the Medical School building here at the University of Bristol. My group is based in them today doing research on meningitis vaccines.

But this was only the start. The charity he founded, Meningitis UK, has raised millions of pounds - many of them donated directly to Steve on sponsored walks which strung together would reach half way round the world - and has funded meningitis research projects in many laboratories across the country. The charity recently merged with the Meningitis Trust to form Meningitis Now. I think, Mr Vice-Chancellor, you will overlook any lapse in decorum if I exhort those present to Google their website, provided I ask them to wait to do so until after the end of the ceremony!

These are auspicious times for Steve. Over the last 4 or 5 years we in Bristol, along with many others, have been involved in clinical trials of the first vaccine against MenB disease to have been licensed. Unlike the Hib vaccine, or the MenC vaccine which followed it, this vaccine will not be the last word for the disease it is designed to prevent. MenB, which took Spencer's young life, is a hard nut to crack. But, once implemented it should prevent more than half, perhaps three quarters of the hundreds of cases which still occur every year. Soon this vaccine will be offered to all infants in this country.

As that important milestone approaches, it seems a particularly apt moment to recognise Steve and his inspirational work spanning more than thirty years. I use the word milestone advisedly. Steve is not showing any signs of slowing down in his efforts. When meningitis in general and MenB disease in particular has been thoroughly stamped out, perhaps he will see fit to relax a bit. Or perhaps, more likely, he will simply find another mountain to climb.

Mr Vice-Chancellor, I present to you Stephen John Dayman as eminently worthy of the degree of Doctor of Laws honoris causa.