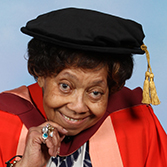 One young woman, born in Kingston Jamaica, heard the plea on the radio: “The Mother Country needs you”. So Princess Campbell decided to come to England. She arrived in Bristol in 1962.

Originally she intended to come to England for five years and then return to Jamaica to share what she had learnt and experienced. But it didn’t quite work out that way. Her family soon followed her to England, she made friends here, and Bristol has been her home ever since.

Bristol in the early 1960s was not an easy place for migrant families to feel comfortable. This was a time of overt discrimination in access to jobs and housing. Princess initially had difficulty finding somewhere to live. Adverts for accommodation that included the prohibition “No Blacks, No Dogs, No Irish” were only too visible.

But Princess is not the sort of person to take no for an answer. She is one of a pioneering group of African-Caribbean workers who began to challenge barriers of prejudice.

The priority on arriving in Bristol was to find work. Princess applied to Wills Tobacco Factory. This was a prestigious employer – this magnificent building is one illustration of its historical significance to Bristol – but Black people did not get jobs there.

She was the first Black person to work in the Wills Factory.

After nearly two years at Wills, Princess decided that she wanted to train as a nurse. She completed her general training at Manor Park and worked as a nurse at Glenside Hospital in Fishponds.

Princess noticed that work was distributed inequitably. She recalls:

"The English nurses would have the easiest jobs; we, the black nurses, would be in the sluice cleaning bedpans and vomit boards. You couldn't complain because the ward sister made a report. You had to put up or shut up."

As a result many Black staff left.

But Princess resolved to become a ward sister.

She was told that white nurses wouldn’t work under a Black ward sister. Some black nurses left for other jobs – they knew this type of discrimination meant they wouldn’t get promoted.

Not Princess. This was something to fight. She pursued further training in psychiatric nursing. She took advantage of every opportunity that presented itself to gain further training and experience. She knew she was going to have to achieve more than her white colleagues to get promoted.

A ward sister position was advertised. Princess applied. The other candidate was a white colleague who was younger, less experienced and had not even qualified.

Yet the role didn’t go to Princess.

Princess was popular with her colleagues and the decision caused discontent among the staff. It resulted in Princess receiving an apology. The hospital realized it had made the wrong decision.

Two years later, Princess became the first Black ward sister in Bristol. She innovated and excelled in the role. She says: "I think I had the best ward. I knew as a black sister that I would be scrutinised. I dotted all the 'i's and crossed all the 't's."

This initial fight to challenge the experience of inequality is emblematic of a lifetime of what Princess herself describes as “positive activism”.

She has campaigned tirelessly for disadvantaged communities and sought to represent and give voice to vulnerable people. These activities have taken many forms.

In the 1980s Princess played a key role in setting up United Housing Association. This initiative was a response to the difficulties Black people experienced accessing affordable accommodation. The association also built nursing homes for older people and sheltered housing for multicultural groups of residents.

Princess has been involved in, and provided leadership to, a wide range of community activities and organisations. These include being part of the Management Committee of the Malcolm X Community Centre in St Pauls and Chairperson of the Golden Agers Club in Easton. These are the two biggest clubs in Bristol primarily, but not exclusively, for older people from the African-Caribbean community.

As a member of Bristol’s Older People’s Forum Princess has fought to maintain and enhance well-being and quality of life for older people. The Forum’s activities – such as the campaign for free bus passes for the over 60s - have had local and national impact.

Princess is a founder member of the Bristol Black Archives Partnership and played a prominent role in 2007’s Abolition 200 events, which marked 200 years since the 1807 Abolition of the Slave Trade Act. She was one of 12 Commissioners on the Bristol Legacy Commission, which continued the work started by Abolition 200 until 2012. Princess has contributed to a number of films and oral history projects. As a member of the Malcolm X Centre drama group she has worked with young people on seeking to bridge the generation gap through role play.

Princess’s work has been honoured both locally and nationally, including receiving an MBE for services to the community in the 2011 Queen’s Birthday Honours list.

Education and aspiration are centrally important for Princess. Education has transformative potential. She continues to act as a role model, visiting schools around Bristol speaking to young people of all races and backgrounds, encouraging them to raise their aspirations and work to the best of their ability.

Princess’s philosophy is best captured in her own words:

“Use determination and your self-esteem: value yourself and let no one crush you. When you come up against challenges and adversity, don’t run away; stay and fight if you want to change things. Education is a most powerful tool and it opens doors”.

“The pen is mightier than the sword. You are able to use the pen to get where you want and what you want in a very modest and peaceful way, in a dignified and diplomatic way.”

“I love to see young people move up the ladder. They should achieve even beyond their capabilities. They should surprise themselves. Sometimes you achieve things you didn’t even think you were capable of. Look for the next rung of the ladder. Never stop achieving. The sky is the limit.”

Her life’s work is without doubt a compelling demonstration of the power of this philosophy.

Mr Pro-Vice Chancellor, I present to you, Princess Eldoris Campbell, as eminently worthy of the degree of Doctor of Laws, honoris causa.