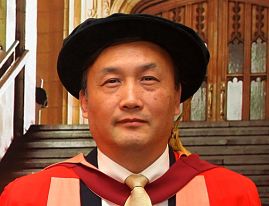 Everyone in this room will recognise that we live in a global economy, where activities and professions cross national boundaries. In fact to succeed, international experience is now essential.  Of course everyone in this room will also recognise that an international perspective is part of being a global citizen, your presence here as graduates and your family members supporting today’s events underline this point.  We expect national and global leaders to have an international perspective and experience so that they progress to the top of their profession.

Professor Wei Yang was born in this city of Beijing on February 16th 1954.  Undoubtedly at that stage he would have had little inkling of the career that lay before him.  He did his undergraduate study at the Northwestern Polytechnical University and then went on to receive his masters degree from Tsinghua University.  At this point, the prospect of international horizons was put in front of him and so he went on to do his doctorate at Brown University in the United States, in the division of Engineering – which he received in 1985.

With this notable achievement under his belt he returned to China and in the astonishingly short period of four years became the youngest Professor at Tsinghua University.  Thus his academic credentials as a rising star who would go on to have an impact on the scientific and engineering community were already established.  However, any career which has continued to reach the heights of Professor Yang’s needs to demonstrate three qualities; that of scholarship, education and leadership.  Being the youngest Professor at Tsinghua was only ever going to be a stepping stone towards becoming an internationally respected academic.

Another distinguishing feature of his leadership is his complete commitment to academic integrity.  In 2012 an article was dedicated to him in Nature on the zero-tolerance approach he has deployed in his own university on Academic Integrity in research.  This demonstrates the values that he holds dear to his own heart, and is right at the core of what the University of Bristol also believes.

Of course, the University of Bristol knows Professor Yang’s academic work, given that his background is in Engineering Mechanics and Materials.  Perhaps the most widely recognised area of research at the University of Bristol is in composite materials, so it is no surprise that Professor Yang’s editorial role in world-leading journals came to our attention, not least being one of the four regional editors of Composite Science and Technology, the leading international journal in the field of composite materials.  He has not achieved this by accident.  His own research activity is prodigious.  He has authored or co-authored 11 books and 240 technical papers.  I’m not sure what he manages to achieve in his spare time – frankly there can’t be much of it left after his academic exertions.  However he has managed to find time to receive international awards from Brown University, the Eric Reissner medal from the International Society of Engineering Science and the Calvin Rice award  from the American Society of mechanical engineers only last year.

Professor Yang’s academic credentials are peerless, alongside which he has risen to the highest positions in Chinese academia.  In 2006 he became president of Zhejiang University – which by any measure is one of the world’s greatest academic institutions.  He has led Zhejiang with a sense of purpose, growing its international profile through first-rate academic output and strategic links across the world.  At Bristol, we regard Zhejiang as our primary academic partner in China, and thank him for his support in fostering links between Zhejiang and Bristol.

Since our invitation to Professor Yang to become our first honorary graduate in China, he has been appointed as President of the National Natural Science Foundation of China.  In this position he will guide and influence the direction of fundamental scientific research for the whole nation.

All of these awards and leadership roles recognise an academic who has performed right at the top of the international scientific spectrum.

Mr Vice-Chancellor I therefore present to you Professor Wei Yang as being eminently worthy of the award of Doctor of Laws honoris causa.