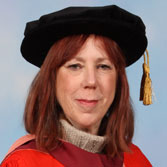 It is fitting that today's awards ceremony, which witnesses an interdisciplinary gathering of Engineering and Modern Languages, honours Jules Wright. A visionary commissioner and curator of contemporary artists, radical theatre director, innovative performance maker and inspiring feminist practitioner, Jules Wright epitomises the leading-edge, mixed-mode practices that have come to mark out as distinct Britain’s cultural and creative economies. And it was to Bristol that Jules came from Australia in 1974 to pursue a one-year postgraduate course in theatre in the Department of Drama: Theatre, Film, Television. Jules once said that 'It doesn't matter if only three people turn up to see what you're doing, so long as you believe in it...A decade down the line the other millions who see it will realise they should have been there'.  Jules’s collaborative, ground-breaking and generous work over the decades has significantly shaped international audiences and artists so I can think of no better advice for our new graduates.

Jules grew up in Adelaide and, at school, developed a passion for theatre. After obtaining an undergraduate degree in Educational Psychology, she knew that she wanted to become a theatre director. How and why people behave as they do and the connections between behaviour, gesture and setting are what link Jules’s twinned interests in theatre and psychology and have guided her career. Hungry for adventure she came to Bristol. Despite the social and cultural challenges of being a New Worlder in an Old World institution – she was persistently referred to as Sheila in her first term – Jules’s tenacity, fierce intelligence and curiosity soon won over the Bristol elite. She developed a supportive intellectual network and remembers working closely with Drama: Theatre, Film, Television colleagues. During her postgraduate course she returned to psychology to begin groundbreaking work using drama within family therapy for psychiatric patients. Rather than adopt conventional Stanislavskian role play, which focused on patients pretending to be singular, authentic characters, Jules focused on Bertolt Brecht’s rejection of realism and pretence. This opened out the potential for patients to take action, rather than be trapped by a sense of singular personality. This research caught the attention of Andy Treacher in Psychology and he invited Jules to become his PhD student. Armed with a Commonwealth scholarship, she leapt at the chance to research further the links between psychology, performance and place.

At the same time, Jules wanted to direct. One weekend in London, she read about Clare Venables’ directorship of the Theatre Royal, Stratford East. Venables was Britain’s first woman to run a major theatre and Jules decided to write to her to request a meeting. The KFC in Stratford Heath began a conversation that didn’t stop. On New Year’s Eve 1978 Venables offered Jules the break of a lifetime: she could start as Assistant Director right away. Jules directed her first main stage production in May 1979, starring the then unknown Tom Wilkinson. Her direction of Nick Darke’s A Tickle on the River's Back was hugely successful and Jules never looked back. The Royal Court made her resident director in 1981.

However, Jules was still a full-time PhD student during this time. Her parallel lives were further complicated when she was offered an Arts Council grant on a trainee director scheme. And so Julia Wright, PhD student, also became Jules Wright, theatre director. The University inevitably sent her a final submission deadline. So, from December 1981 to the end of February 1982 Jules camped out in Andy Treacher’s Bristol office, working from 6am to 3am every day. Each morning she would buy a donut and each night she would eat a roll, ham and pickled onions. Ritual was important. George Orwell’s essay, ‘Why I Write’ kept her going: she hit the deadline and became Dr Wright. Jules returned to London to become Artistic Director of the Theatre Upstairs at the Royal Court. Her work there through the 1980s and 90s has been hugely important in her development as a director and she is particularly well known for the radical new work she staged. In 1984, she was Assistant Director to Max Stafford-Clark’s Rat in the Skull, which featured a young Gary Oldman. This was also the year that the Women’s Playhouse Trust launched, with a production of Aphra Benn’s Lucky Chance. Jules became Artistic Director of WPT and her work through the late 1980s and 90s was instrumental in bringing the work of female playwrights and artists to the stage and in pioneering site-specific and multi-media performance, which was inspired by Pina Bausch’s vision and practice. From 1984 to 1987, Jules was Artistic Director of the Liverpool Playhouse, with Willy Russell and Alan Bleasedale as her Associate Directors. In two years she turned around a £179,000 deficit and then left, eager to be her own boss. From 1987 to 1991 she split her time between Sydney and London, with stints as Deputy Artistic Director at the Royal Court, where she remained until 1992.

We are very lucky that in 1991 Jules did not take up the offer to run Sydney Opera House. She knew that she wished to move on from large organisations. Her time negotiating the drama of theatre politics had taught her that. Rather, she was inspired and driven to innovate – to make new work, forge new collaborations and develop new performance forms. Jules recalls supporting Edward Bond’s revival of Restoration at the Royal Court. While he, famously, fell out with the theatre, Bond and Jules got on well and she gained insight in to the creative’s vulnerability – that the act of making requires both confidence and a good dose of uncertainty. As Bond told her, ‘if you can’t take the dirt, you shouldn’t take the praise’. For Jules, you have to be your own most rigorous critic and be ruthless. To fail knowing that you’ve done everything in your power to succeed is the thing.

Jules’s theatre career confirmed her as one of the leading directors of her generation, enabling artists to produce excellent work. Since the 1990s, Jules has taken those skills freelance to work with writers and composers, visual artists, filmmakers and fashion designers. In 1991, she found Wapping Hydraulic Power Station, a crumbling nineteenth-century building, which was Grade II listed and had closed in 1977. She described it as ‘completely covered in moss - just like walking into fairyland’ and first transformed it into a performance space in 1993. Jules secured the freehold in March 1998 and spent £4m restoring it before opening The Wapping Project in 2000. The Wapping Project blends entrepreneurialism with leading edge art practices. With Battersea Arts Centre and Tate Modern it’s one of London’s key contemporary art and culture institutions.

Whether at home in Wapping or as a freelancer, Jules pursues creative challenges. In 2010, she curated the Swarovski Crystal Palace at the Salone di Mobile in Milan, an incubator for cutting edge design that merges art, design, science and technology. For that project, Jules devised the mise-en-scène that brought dramatic life to the different designers’ works. This winter’s Wapping Project show, Undiscovered Landscapes, created a dramatic installation of films by leading international artists working with cinematic form and place. As Jules says, ‘I’m a director of public spaces. I treat design like a live performance’. Ultimately, Jules’s artistic vision is about collaboration. As Jules has said ‘People say Wapping is amazing. Wapping is only amazing because of the people who have done the work that they’ve done in it.’

It is this clear vision, creative drive, great business sense and belief - in herself and others - that singles out Jules Wright as an inspiration for all of us who aim to make a difference in the world.

Madame Chancellor, I present to you Jules Wright, Doctor of Letters, honoris causa.