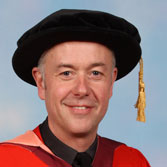 Today we honour Michael Winterbottom, one of Britain’s most prolific, provocative and innovative film directors. He is a distinguished Alumnus of Bristol’s Film and Television Production postgraduate course, and we are proud to have played a part in fostering a career that since the late 1980's has produced over 30 films. Many of these have been nominated for and awarded prizes at prestigious international film festivals. He continues to delight, surprise and occasionally shock audiences and critics with his films that challenge generic conventions, experiment with technology and often deal with uncompromising subject-matter.

Born in Blackburn, Lancashire, in 1961, Michael studied English at Oxford before joining the postgraduate filmmaking course at Bristol, then directed by the late George Brandt. Michael remembers the collaborative ethos of that course, and how it allowed him in a pre-digital age to experiment with equipment that was not widely available to all. Crucially, he met like-minded film enthusiasts who also went on to establish careers in the industry. These included Welsh director Marc Evans and screenwriter Olivia Hetreed. Also in Bristol, but not at the university, he met Andrew Eaton who became Michael’s producer and co-founded Revolution Films with him in 1994. Michael’s fascination with film began with experiments with Super-8 films. A formative experience was working as a researcher with Lindsay Anderson, esteemed British filmmaker much admired by Michael, whose influence and ideals can indeed be detected in his subsequent work. Television provided Michael with another training ground, particularly two award-winning documentaries about Swedish filmmaker Ingmar Bergman, made for Channel 4 and ITV in 1988. Other television work followed, including directing an episode of the popular and acclaimed series Cracker in 1993. This preceded the formation of the aptly named Revolution Films, the company that has produced most of Michael’s films and stands firmly for the virtues of independent production within an international film industry otherwise dominated by major Hollywood studios.

The next few years saw Michael being heralded as one of the most exciting, innovative British feature filmmakers. This reputation was firmly established with several films that deployed stylized traditions of ‘poetic documentary’ with generic non-conformity. Butterfly Kiss (1995) combined road-movie conventions with an unsettling, dystopian visual look within a narrative that like many of Michael’s other films, did not shrink from violence, both physical and psychological. Jude was released the following year, the first of three films inspired by Thomas Hardy’s novels. The film eschewed the comfortable, pictorial traditions of the British costume drama for a bleak depiction of Jude’s struggle with poverty and spiritual despair, as his dreams of becoming a scholar are shattered. The incessant, rain-drenched landscape is an apt backdrop for this predicament, demonstrating in a striking way Michael’s ability to communicate major themes through a cinematic evocation of the physical environment.

In these early years some other recurrent themes and approaches are evident in films such as Welcome to Savajevo (1998). This was an adaptation of Natasha’s Story by ITN war correspondent Michael Nicholson that concerned his adoption of a child from an orphanage in Bosnia in the early 1990s. This moving film conveyed the resilience of people living in Sarajevo at a time of intense political conflict, using contrasting stylistic methods to problematize the strained distinction between documentary and fiction. In the same year Wonderland (1998), another of Michael’s most celebrated early films, was released. Set in London, the film focuses on the intersecting lives of three sisters and their extended family over a weekend. Shot by distinguished cinematographer Sean Bobbitt, who became another of Michael’s frequent collaborators, the film is remarkable for its naturalistic performances, use of impressionistic techniques such as time-lapse photography and slow motion, again using vérité modes to convey an uncomfortable closeness to real life. In this and many of his other films, Michael relishes the multivalent textures of filmmaking, continually exploring the aesthetic possibilities offered by different technologies from 16mm film to digital.

Versatility has indeed been an important marker of many of the films. From drama and documentary, the generic mix has proliferated into comedy, science fiction and the thriller. Viewing Michael ’s films is not always easy. While critics have often labelled them controversial for their graphic depictions of sex and violence, these are important elements of films that never shrink from uncomfortable truths or wish to present the world as a safe place, either personally or politically. It takes courage to stand up for the spirit of independent filmmaking so defiantly represented by Winterbottom’s hero Lindsay Anderson and the Free Cinema movement of the late 1950s. Films made in the last ten years certainly exemplify this renegade attitude. With a director as prolific as Winterbottom it is not possible to mention them all, but Code 46 (2003), In This World (2002) and The Road to Guantanamo (2006) stand out as particularly significant. Code 46 uses the genre of science fiction to present a disturbing scenario about the consequences of genetic engineering and the erosion of personal freedom.  In This World won many awards including the Golden Bear and Peace Prize at the Berlin International Film Festival for its acutely observed portrayal of two Afgan refugees as they undertake a perilous journey from Pakistan to London. The Road to Guantanamo was co-directed with Mat Whitecross and once again it combined drama and documentary. It was about three British travellers (‘The Tipton Three’) who had gone into Afganistan shortly after the start of the war and were imprisoned for two years in the detainment camp at Guantánamo Bay. The film was controversial for its depiction of torture, and could only find release in the USA through an independent distributor. But it reached a wide audience in the UK and beyond; it was broadcast on Channel 4 and released simultaneously the following day on DVD and the Internet. It was also a critical success, winning several awards including the Silver Bear for Best Director at the Berlin Film Festival, and Best British Documentary at the British Independent Film Awards.

One of the characters in 24 Hour Party People (2002), his film about the Manchester music scene 1976-92, has been referred to as a ‘great chemist’. In many ways this is an apt description of Michael Winterbottom who over the years has obtained the best out of his collaborators to produce this richly diverse corpus of films. As well as consistently working with Andrew Eaton, writers Frank Cotterell Boyce, Roddy Doyle, Hossein Armini and Tony Grisoni should also be mentioned, as well as production designer Mark Tildesley, composer Michael Nyman, cinematographer Marcel Zyskind and producer Melissa Parmenter. As well as working with many non-famous actors he has consistently collaborated with Shirley Henderson, John Simm and Steve Coogan. His most recent film is Trishna (2011), a story set and filmed in contemporary India but loosely based on Tess of the D’Urbervilles. The penchant for appropriating Thomas Hardy has surfaced several times in his career; in addition to Jude the film The Claim (2000) transposes the themes of The Mayor of Casterbridge to California in the aftermath of the Gold Rush. These examples attest to an adventurous, pioneering spirit that genuinely wishes to explore the film medium, whether on celluloid or by filming with digital cameras. The record of production achieved over the last twenty-five years has indeed encouraged us to look more closely at and think more carefully about a range of issues, using approaches and styles that confirm Winterbottom’s place as a contemporary film director working at the top of his game. I’m sure that Lindsay Anderson and, closer to home, George Brandt, would have been proud of this British director.

Madam Chancellor, I present to you Michael Winterbottom, Doctor of Letters, honoris causa.