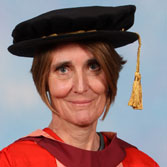 Mr Vice-Chancellor, for many of us children and young people, at some stage, are the centre of our lives.  As parents or guardians we are responsible for their upbringing, care and protection.  We plan and provide new opportunities, including even perhaps where we choose to live.  Children can be more resilient than we sometimes think but it is a major responsibility to protect the vulnerable and help shape future citizens.  Most parents do this willingly and effectively, sometimes overcoming social and economic adversities along the way.

In addition, there are particular responsibilities on certain professionals to ensure the safety and welfare of all children.  It is difficult to think of many tasks that are more important  or challenging.  The University of Bristol today is recognising the achievements of an outstanding leader in the field of child welfare, Dame Clare Tickell.  Clare qualified as a social worker from the University of Bristol in 1986 and over the intervening period has risen to the top of her profession in housing and now heading a leading UK children’s charity, Action for Children.

It is interesting to consider what factors have shaped Clare’s career and most professionals probably select their chosen employment for particular reasons.  Clare acknowledges the influence of her parents and their commitment to social justice: for example during the South African anti-apartheid era, Clare’s mother raised funding to support the families of black political prisoners.  We are particularly pleased that Mrs Diana Tickell is able to be with us today.  Clare is also the eldest of seven siblings, which she feels undoubtedly had some influence on her subsequent choices.

As she points out, Clare’s early education was slightly unconventional.  She passed the 11 plus to attend grammar school but, aged 12, decided instead that she wanted to go to a comprehensive.  The commitment to social justice and incipient social worker may have been present even then.  It seems that these qualities were further nurtured as, in her own words, she then  decided to drop out of school half way through her A levels.  She undertook a variety of secretarial jobs before joining the Avon Probation Service, which was offering  an alternative to custody for young male offenders.  Clare recalls this as a particularly effective and innovative service.

Clare’s career took an important turn in the mid-1980s and she is grateful that the probation service encouraged her to undertake professional training.  She was offered a place on the Certificate of Qualification in Social Work course (CQSW) here at the university, the predecessor to the Masters in Social Work award that a group of our students have just received.  Clearly the university education provided the formal opportunity and encouragement for academic study and curiosity that Clare had previously missed out on.  She describes this stage of her life as ‘I thought I’d died and gone to heaven’.  She especially remembers the influence  of individuals such as Peter Townsend, Roy Parker and Phyllida Parsloe as well as others – as she puts it, ‘they were great people teaching, just right for me’.

Clare also recalls from this period the situation in a family with which she was working on a student placement, when she justifiably suspected that abuse was occurring.  This was before the issue arose nationally in Cleveland.  A senior consultant objected to Clare’s interference, complained to the university and insisted that she should be removed from the placement.  Clare says that staff and the university supported and backed her completely, for which she has undying gratitude.

Clare recalls the emphasis on community work and activism that was part of the course at the time and, indeed, social work more widely.  Linked to this, it was possible to arrange a student placement with Shelter, the housing and homeless charity.  The St Pauls riots in Bristol had occurred just before and race and housing were important, strongly political issues.  Clare’s student project on this subject, she feels, was instrumental in her being offered a job with Shelter on leaving the university.  They obviously spotted a rising star and on qualification, and still just in her 20s, she became Deputy Director of Centrepoint in Soho responsible for five projects for homeless young people in central London.  This was an exciting time, including Princess Diana’s involvement.  Clare’s career in housing and support services extended for 18 years as chief executive for some of the best known and most significant housing charities and organisations in the UK – Stonham, Phoenix and Riverpoint.

In 2004 Clare was then head-hunted to lead Action for Children, one of the biggest children’s charities in the UK.  Notwithstanding its major influence, there was, I imagine, quite a job to be done in modernising this longstanding organisation.  It now employs some 6,000 paid staff, works with 5,000 volunteers, runs 480 projects and every year supports over 180,000 of the most vulnerable children, young people and their families.  It focuses on combating child neglect and abuse and offers services ranging from family support, fostering and short breaks to children acting as carers with their families.  Having worked previously mainly with adults, Clare welcomes the opportunity that focusing on children through early intervention and support may help to avert later difficulties.

Alongside its family-focused work, Action for Children also adopts a high public profile in speaking out on behalf of children, including lobbying politicians and policy makers – ‘speaking truth to power’, to coin the phrase.  Clare is strongly concerned about rising child poverty.  The current welfare reforms will potentially have serious adverse effects on children, which may breach their existing, national and international, independent legal rights.  Children are three times more likely than adults to be affected by the benefit cap.  It has been estimated that 82,000 children could lose their homes, as housing benefit changes could make rents unaffordable.  Whatever we think of parents, as Clare expresses it, ‘children are the victims – there is absolutely nothing they can do about it.  It’s not the children’s fault’.

Clare’s contribution and expertise have been recognised by invitations to undertake a variety of high-level tasks for government and others.  She chaired the government’s Early Years Review and has been a member of commissions looking at the future of hospices, public services, English prisons, data protection and freedom of information.  All of these achievements were recognised with the award of a Dame Commander of the Order of the British Empire (DBE) in the 2010 New Year Honours, for services to young people.

I informed Clare that there would be social work students in today’s audience and asked if she had any advice for them, reflecting on her post-Bristol career. Fortunately, she didn’t urge you to reconsider or to retrain!  Instead she emphasised that the art and skills that social work requires are among the most undervalued that there are.  As social work professionals, you will have to make the most difficult decisions through multiple shades of grey.  You need to be resilient and wise.  But despite the difficulties it is an inspiring and wonderful job, in which you know you’re making a difference by touching and connecting with people’s lives.

Two years ago Clare was voted by her peers as the most admired chief executive in the third sector, a major achievement.  A senior figure in the voluntary sector at the time described Clare as ‘a sector superstar who combines passion and commitment with a strong intellect, as well as a good sense of humour and fun’.  I can think of no better qualities that this university should recognise and, Mr Vice-Chancellor, I present to you Dame Clare Tickell as eminently worthy of the degree of Doctor of Laws honoris causa.