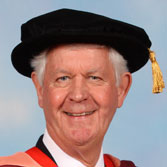 Bristol’s growth and success was built on its role as a trading port, at one time second only to London. And that port, plus the docks at the mouth of the River Avon, needed tugs and stevedores, to handle the cargoes and to tow the ships, including in the early days all the way up the treacherous Avon Gorge to the heart of the city. For generations these tugs and stevedores were provided by two firms, one of which – C.J. King & Sons – was the family business of the Stevensons.  It was into this family in 1945 that Tim Stevenson, today’s honorary graduand, was born, and it was inevitable that their passion for the sea and for sailing would stay with him throughout his life.  Indeed it was evident early, in that his proudest school-day memory is of being in the dinghy sailing team that beat the professional sailors of the Dartmouth Royal Naval College three years in a row.

At the age of sixteen Tim went for a job interview at C.J King & Sons. He must have thought that his chances of success were reasonable, in that he was interviewed by Jack King, the Chairman of the company – who just happened to be his great uncle. However, it was a brief interview. He was told - “no member of the family just walks into the firm – you must go away and prove yourself first”.  So he did.  But as he left the interview he had to fight his way through the throng of dockers who were hoping for work.  This was in the days of the Docks Labour Board and the brutal system for determining who got to work on a particular day.  Inevitably it also made ‘docks’ a by-word for appalling industrial relations in the 60s and 70s.  It occurred to Tim that perhaps it would not be all that bad to make a career elsewhere.

But a career in what? On his mother’s advice in 1963 he became a pupil surveyor in the Bristol firm Pritchard’s, on a salary of £1 a week. To put this in perspective, my university student grant in that year was £7 a week. Tim is keen to say that after a year he got a 100% rise - to £2! - and that after four years his pay had soared to £5 a week.  During this period he worked full-time during the day and in the evenings studied for three or four hours on a Reading University correspondence course.  After following a route arguably much harder than the then ‘normal’ university education, he qualified in 1967 as an Associate of the Royal Institute of Chartered Surveyors.  Subsequently, at the very young age of 31, he became a Fellow of the Institute.

Mr Pro Vice-Chancellor, it is interesting to note that Pritchards were the surveyors to this University and while a pupil Tim spent a whole year poring over plans, calculating the cubic content of all our buildings for rating purposes, including the one we are in now. I am told that the results of his work are still used by the University today, and that we still round down his numbers to produce the best financial outcome!

After qualification Tim moved to another well established Bristol firm of surveyors - Lalonde Brothers and Parham - and helped start their commercial department. Rapid advancement followed. He became a partner in 1967 at the age of only 23 and following the firm’s merger with Chestertons he became UK Board Director and ultimately Regional Managing Director. In this role he foresaw the opportunities provided by the imminent construction of the new M4 and spent considerable time in London successfully encouraging companies to relocate to Bristol. These included Sun Life, London Life, Phoenix Assurance and the National Television and Licensing Authority.  In all, Tim can justifiably claim to have brought 20,000 jobs to Bristol, along with the construction work and the supply chain jobs that go with it.  This has had a huge impact on the local economy.

After this work he moved into the world of commercial property investment and financing, acting for bodies seeking to invest in property and in funding town centre developments.  He became widely regarded nationally as an expert in these matters, working with many pension funds and life assurance companies, and for organisations like the Church Commissioners and the Crown Estate.  In fact, the biggest deal he ever did was on behalf of the Crown Estate, a deal which was to prove Parkinson’s Law of Triviality, which is - “the time spent on any agenda item will be in inverse proportion to the sum of money involved.”  When Tim went to Windsor Castle to present his case for an investment of £84 million pounds in the new Worcester city shopping centre he had to wait for 45 minutes while the Crown Commissioners discussed the relocation of a tree on the Windsor Estate. In accord with Parkinson, they then approved Tim’s proposal for the £84 million pounds investment without questions and in less than 5 minutes!

In due course Chestertons was floated and Tim retired early.  But he was not a man to retire to the golf course. He remains business-active as a director of five companies and gives generously of his time and expertise to benefit charities such as the Bristol Stroke Association, Bristol Old Peoples Welfare and the Bristol Guild of Guardians, among others.  He is also an accomplished clarinettist and performs regularly at community centres and at St Peter’s Hospice.

Mr Pro Vice-Chancellor, up to now I have been describing Tim Stevenson’s contributions to the city. Before going on to describe his contributions to this University I need to briefly explain how it is governed.  The Council is the governing body of the University – according to our Statutes it sets the policies and ensures the Vice-Chancellor and the University officers act to further them - and it contains representatives of the officers, the staff and our students.  Importantly, it also contains lay members, people who bring a wide range of skills and experience, and also invaluable independence. As well as serving on Council the lay members play key roles on its sub-committees and also act as arbiters for staff and student appeals and complaints. The time commitment is substantial but the remuneration is not – it is zero.  Outstanding value for money, one might say.

On retiring Tim thought that an excellent way to give something back to the city was to help its university and he offered his services to the then Chair of the University Council, Moger Woolley.  The words ‘gift horse’ and ‘mouth’ come to my mind, and they undoubtedly occurred to Moger too.  For Tim was immediately appointed to the Estates Committee and within a very short time became its chair and a member of the Council. He remained chair of the Estates Committee for seven years, until 2010, overseeing and advising during a period of major refurbishments and new developments at a cost approaching £200 million pounds. There were also major property sales which realised £40 million pounds for reinvestment by the University.

Tim had a major impact on the University’s estates operation, bringing in other lay experts to offer advice, empowering and supporting the Estates team, while keeping them on their toes, and - importantly - bringing his commercial acumen to bear.  He undoubtedly saved the University a substantial amount of money.

To what does he attribute his success in life?  He puts it down to drive, hard work, liking being stretched, getting a great buzz out of succeeding in tasks, and being a naturally calm person.  People say other things: that he fits the classic definition of a professional – he puts the client’s interests before his own. They also say he has quiet authority, is patient, fantastically bright, always the same person, whether in a professional negotiation or socially, and is always cheerful and friendly.

Tim says he has been lucky. But I suggest it is the same luck that the great South African golfer Gary Player had and who coined the saying – ‘the harder I practise the luckier I get’. In other words, you make your own luck, and we can be quite sure that Tim made his.

Does he still have ambitions?  To catch a salmon!  That’s something I plan to help him with later this year. In light of his achievements so far I have no doubt they will be queuing up to take his fly rather than mine.

The University of Bristol awards honorary degrees for two reasons: to recognise great personal achievement and to demonstrate to our graduating students just what a difference one person can make.  Tim Stevenson is an outstanding example.  He is a true son of Bristol who has always had the best interests of his city and the University of Bristol at heart. Fifty years ago his great uncle asked him to go away and prove himself. He surely did.

We are delighted that his sister Sally and daughter Amanda are with us today as we recognise his achievements and express our gratitude.

Mr Pro Vice-Chancellor, it is with the greatest of pleasure that I present to you Timothy Paul Stevenson as eminently worthy of the Degree of Doctor of Laws, Honoris Causa.