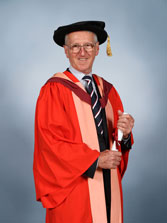 George Yeoman Pocock, a legend of the sport, had this to say about rowing:
“Rowing is perhaps the toughest of sports. Once the race starts, there are no time-outs, no substitutions. It calls upon the limits of human endurance. The coach must therefore impart the secrets of the special kind of endurance that comes from mind, heart, and body.”

Sir David Tanner has been the Performance Director of British Rowing since 1996, 21 years and counting. His vision and relentless drive have been key to the sport’s consistent Olympic and Paralympic success.

David attended Abingdon School in Oxfordshire where he was first introduced to the sport of rowing. He then came to Bristol to complete his undergraduate degree, graduating in 1970. David continued to row while here and recalls cycling from Wills Hall to Saltford, where the University boathouse was and still is, for rowing most days of the week. David described this routine as “quite tough”. As someone who also did the 20-mile round trip most days but in a car, I can confirm it was probably more than a bit tough and most likely utterly exhausting!

In his second year at University and after the winter head race season David found himself without any summer racing plans and so began volunteering as a coach at Clifton College. It was here that he caught the “bug” for coaching and started on the path that would lead to his current position and success.

David’s first major coaching achievement came in the late 70s when he coached four schoolboys from Ealing Grammar School to win three junior and senior world championship medals and, in 1980, an Olympic bronze.

Of course, before Lottery funding came along David had to find another way to fund his coaching ambitions, developing a full-time career in education and becoming headmaster for 10 years at a comprehensive school in West London. As well as the day job, David was also the Great Britain Senior Team Manager between 1991 and 1996, a period which included both the Barcelona and Atlanta Olympic games.

Rowing became a Lottery-funded sport in 1996 and David was appointed its Performance Director, a position he’s held ever since. I could spend the next hour telling you about the success the British Rowing team has enjoyed under his stewardship, but as time is limited, I shall endeavour to provide an abridged version.

Then on to London in 2012. It had been more than 20 years since any country had won more than six Olympic rowing medals. At the 2012 games, on Dorney Lake in Eton, GB’s rowing team racked up an amazing haul of nine medals. Four of these were gold including the country’s first-ever gold in women’s rowing. Following this success, and in recognition of the pivotal role he had played in its delivery, David was awarded a knighthood in that year’s Queen’s Birthday Honours.

The Rio Olympics marked David’s ninth summer games and once again saw the British Rowing Olympic and Paralympic teams top the medal table. I’m sure you’ll agree, it is one thing to develop a successful performance programme, but quite another to sustain it for more than 20 years.

In spite of his incredible achievements in elite sport, when asked recently by the Telegraph what he was most proud of, David stated: “building on the spirit there is in rowing, bringing in young rowers and building a stage around them on which they can perform. And the 'Start' programme to recruit athletes who hadn't rowed before. It was a bit of a leap in the dark but has had an impact.” Spoken like a true coach and educator - deriving passion and drive from the development and success of others, not individual glory and acclaim. The aforementioned Start program produced half of London’s 10 Olympic Champions, four of them women, including Helen Glover and Heather Stanning who won gold in the Women’s pair.

David’s story and success go to show that the passions and interests you develop at university can often shape and define your life even more than the subject you studied. I’m sure as you all sit here today, and reflect on your time at Bristol, the experiences you’ve had, friends you’ve made and the passions you have pursued are at the forefront of your minds, possibly more so than that 9am lecture on Microbiology. And who knows, maybe they too will go on to shape your career and inspire you to achieve great things.

Deputy Vice-Chancellor, I present to you Sir David Tanner as eminently worthy of the degree of Doctor of Laws, honoris causa.