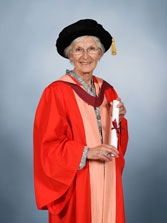 This is a story with three strands, or threads if you like, which wind around each other to create a fascinating fabric, or a rope of great strength.  A clumsy metaphor perhaps but it goes some way to describe the life and achievements of Mary Prior and the journey she made from her first 18 months in a caravan in south Gloucestershire with her parents and four older siblings in the 1940s to, decades later, her life for the last 10 years as Her Majesty’s Lord Lieutenant for Bristol.  She retired from this role earlier this year and it is abundantly clear that she holds the affection and admiration of so many people in Bristol for her tireless work with people, charities and initiatives across the city.

The first of these three threads is the seizing of opportunities.  At Kingswood Grammar School Mary jumped at the chance of a newly created sixth form Commercial course and discovered an aptitude for short-hand and typing and a competitive spirit to be the fastest and best.  An office junior role followed and then marriage and motherhood in the days when married women were not really expected to continue in work.  But the household was short of money and Mary worked from home typing up documents and invoices for small businesses.  Then, encouraged by a friend, Mary started to work as a temp at a time when her skills were in great demand.  She could be choosy about where she worked and retain flexibility to help care for her family.

Finally, however, she succumbed to the highly-unusual and confidence-boosting offer of a company car and became PA to the Managing Director of Alexandra Workwear.  Soon thereafter the country was in the throes of the 3-day week precipitated by an international oil crisis and Mary remembers working through the winter with candle light and no heating.  But 12 years later, in 1985, Alexandra Workwear floated on the main stock exchange with Mary as Sales and Marketing Director and with three other women on the Board.  They looked to raise £10m and were 89 times over-subscribed.  Mary had seized the right opportunities.

The second thread running through Mary’s life concerns voluntary and charitable work.  As a young, busy mother she was asked to play a leading role in her local Women’s Institute where she discovered a talent for leadership and getting things done and the joy of making a positive difference in the lives of other people.  As she rose through the ranks at Alexandra she took on more voluntary roles, never scared of the workload or responsibility.  At every turn there were different experiences to learn from and new people to meet.  Unexpected doors would open and, for someone prepared to venture outside her comfort zone, there opened up a life of variety and stimulus.  In 2007 Mary was appointed Lord Lieutenant – the Queen’s representative in the City – unpaid and at times almost full-time.  She has become Patron or President of over 30 charities and received the MBE, Dame of the Order of St John, and Commander of the Royal Victorian Order.  She is a justice of the peace, a member of the Merchant Venturers of Bristol and, importantly, a Pro-Chancellor of the University of Bristol where she is much loved for her commitment and enthusiasm for the activities of the University.

And so to the last thread – what can it be?!  It is an interest in people.  Mary’s interest in, and her skill in working with people was the secret behind her journey from PA to Director at Alexandra.  Her boss had good ideas but a hopelessly insensitive way of implementing change.  Mary also had good ideas but also a knack for getting change to happen.  Mary’s interest in people became the bedrock for her time as Lord Lieutenant where she demonstrated an ability to connect with everyone and a talent for recognising and valuing the work of others.

Mary has benefitted from a wonderfully supportive family:  John, her husband since 1982 whom she met and worked with at Alexandra, along with her children Max and Sophie, and their partners Mandy and John.  They are all with us today.  Sadly Mary’s mother is not as she died earlier this year at the wonderful age of nearly 108.

Pro Vice-Chancellor, we have before us a remarkable woman who, by seizing opportunities from all quarters in the business and voluntary worlds, has helped to shape modern-day Bristol. A great friend to the University, Mary is an inspiring example of how the more you do, the luckier you become.  This surely must be a message for all new graduates here today.

Pro Vice-Chancellor, I present to you Alice Mary Prior as eminently worthy of the degree of Doctor of Laws, honoris causa.