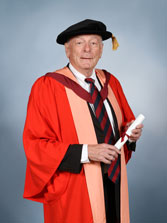 Many of you will already be familiar with Richard (Dick) Pound’s name in the context of the fight against corruption and drugs in sport. But Dick’s has been a remarkable and extraordinarily productive life with achievements well beyond these fields.

A few highlights: double Olympic swimming finalist; winner of four Commonwealth Games swimming medals; prominent Canadian tax lawyer and QC; author of biographies and books on the Olympics and the fight against drugs in sport; long-time member and twice Vice-President of the International Olympic Committee, or IOC; Founding Chairman of the World Anti-Doping Agency; Chancellor of McGill University; and the recipient of multiple awards and honours. I could go on.

Sport has been one of the major driving forces in his life. As well as being a nationally ranked squash player, Dick represented Canada in the 1960 Rome Olympics, finishing 6th in the 100m freestyle and fourth in the 4 x 100 metre relay (‘should have done better’ according to Dick); and again in the 1962 Commonwealth games in Perth where he won one gold, two silver, and one bronze medal. He then served as Secretary and President of the Canadian Olympic Committee, before being elected, in 1978, to the IOC. He served on its Executive Board for 16 years, including eight years as Vice-President (1987-1991, 1996-2000).

Dick played a major role in reviving the Olympics. After the Russian and American Olympic boycotts in 1980 and 1984, they were at a low ebb and in financial trouble. The deals he spearheaded as Chairman of the IOC’s Television and Marketing Committee revolutionised the Games, transforming them into a multibillion dollar event and dramatically increasing the money going to poorer nations to develop sport and particularly athletics.

He was an outspoken opponent of corruption. He was, one of the IOC’s fiercest critics said, ‘one of the good guys’. Amongst other things, he chaired the commission into the corruption surrounding the 2002 Salt Lake City winter games which led to the resignation of six committee members. His uncompromising stance did not, however, further his IOC career. When he stood for the Presidency a few years later, he finished third, behind a candidate who had been implicated in the Salt Lake City corruption. It was then that Dick turned his attention elsewhere.

Since the 1990s, Dick has led the fight against the use of drugs in sport. I don’t think Dick will mind if I say that his entry into this field was not the most auspicious. At the 1988 Olympics, the Canadian sprinter, Ben Johnson, famously won the 100m. A day later he tested positive for steroids. The Canadian officials pressed Dick, the only lawyer in their team, to defend him. First, Dick wanted confirmation that Johnson was innocent, so he asked him, directly, whether he had taken drugs. Johnson looked him in the eye and said he hadn’t. Dick defended him to no avail. It turned out, of course, that Johnson was, in fact, a long-time and systematic steroid user.

The lesson that Dick learned held him in good stead when, some years later, he turned his attention to doping in sport. He was the inspiration behind, and founding chairperson of, the World Anti-Doping Agency or WADA, the independent international authority that regulates and polices drug use in sport. He was WADA’s President for eight years, overseeing the development and implementation of the World Anti-Doping Code, which has done so much to strengthen drug-testing and anti-doping practices around the world. More recently, he chaired the WADA commission into Russian athletics which uncovered a state-sponsored doping programme.

Dick believes passionately in sport’s physical and moral worth. If sporting competition is to mean anything, he believes, it must have integrity; it must be fair. Sports are games and games have rules. By participating, you are affirming that you are playing by the rules. These beliefs have underpinned Dick’s unflinching commitment to tackling doping.

He has never shied away from taking on the big and the powerful, taking as tough a line with the authorities in America and Russia - n athletics and cycling - as he has with individual violators. The stance he has taken has not made him universally popular, but he accepts that making enemies is part of the job. In 2004, for example, he said it was clear that riders in the Tour de France were doping, incurring the wrath of the cycling authorities and certain leading cyclists, who repeatedly denounced him in the strongest possible language. Now, of course, we know the truth - and the pattern: denial, abusive defence, admitted guilt. Dick has been vindicated time and time again.

Like (no doubt) many of you here today, I love the excitement, the drama, the glory and the heroism of sport. But we want to believe what we are seeing. We want our heroes to be real.

Dick has absorbed a lot of criticism and abuse in his pursuit of fairness in sport. Part romantic, part hard-nosed realist, determined, forceful, courageous, principled, there is an awful lot in Dick Pound’s life and career to admire and to emulate. He is a man of tremendous energy, ability and, crucially, integrity.

Vice-Chancellor, I present to you Richard W. Pound as eminently worthy of the degree of Doctor of Laws, honoris causa.