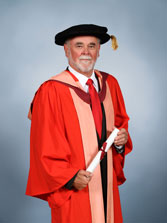 I am delighted to speak about Dr Russell Hamilton and his role in transforming the way in which health-related research is conducted in this country – starting out here in Bristol with Professor Stephen Frankel, the other honorary graduate - and then from London, working at the heart of government.

But first, back to the beginning. Russell Hamilton was born in Australia and gained a first-class Biochemistry degree there before a Physiology PhD and MBA in London. He came to Bristol in 1993 as the first Research and Development manager for the South West Regional Health Authority. Working closely with Professor Frankel, together they extracted resources from the NHS for research undertaken in multidisciplinary teams aiming to improve outcomes for patients and the wider population.  Epidemiologists like Professor George Davey Smith, the other orator today, worked with social scientists like me, and statisticians, surgeons, health economists, physicians and administrative staff.  Commonplace now, this kind of collaborative working was extremely unusual then.

Russell then moved to London and became Director of Research and Development for the South of England and then the whole country, based at the Department of Health.  There, he played a central role in the creation of the National Institute for Health Research (NIHR) – the funding body for research in the NHS –which was launched in 2006. Russell was then responsible for all the policies, strategies and funding schemes of NIHR, overseeing its budget of over £1 billion per year. He delivered the vision of NIHR - world-class research evidence generated by, with and for the NHS, improving the health of patients and the public.  Russell was also actively involved in many other national initiatives for health-related innovation and science. Russell was awarded a CBE in 2010.

To achieve something so transformational requires some particular characteristics - astute understanding, clear thinking, an inexhaustible appetite for hard work, and serious political 'nous' come immediately to mind. There was also incredible cleverness and tremendous determination. Over and over again Russell was told, “that can't be done in the NHS", and each time he smiled quietly and worked out exactly how it could be done.

People said, "How can you ensure NHS organisations will support and value research?"  Russell drew up the legislation and changed the law to make it a legal requirement for them to do research.  And, "How can you encourage busy NHS staff and ivory-tower academic researchers to collaborate on research needed by the NHS?"  Well, by commissioning specific projects identified by the NHS, expecting them to be led by University academics, and then funding them through NHS Trusts.  And, “How can you enable more women to get leadership positions in medical schools (there were almost none in 2006)?”  Well, by restricting NIHR funding to go only to Universities that could prove they had made substantial efforts to increase equality and diversity.

These are just a small number of so many achievements.  The approach is reminiscent of Aneurin Bevan’s in the creation of the NHS itself in July 1948, nearly 70 years ago – clear thinking and with some small concessions but without compromising on fundamental principles.  All of us working in health-related research should be grateful for these things, many of which will stand the test of time.

Russell would be the first to acknowledge other people’s contributions. He built formidable partnerships - here in Bristol with Professor Frankel, with Sir John Pattison at the Department of Health, and most recently with Professor Dame Sally Davies in NIHR. But it was Russell who showed the unerring ability to identify a clear goal, work out what was needed to achieve it, and then to have the steely determination to make it happen. He has always taken pleasure from seeing other people enjoying the successes, and refusing any personal accolades – so today is a special occasion.

Russell and Stephen share an inspiring style of leadership – strong and principled, delivered with kindness, modesty and generosity.  It is a style that many of you graduating today might like to emulate as you move into your own leadership positions.  We certainly need more of this kind leadership here in this institution and elsewhere.

Away from work, Russell's wife and two daughters are the focus of his life, and since retirement last year he has enjoyed backpacking around the world and camping. But I have to report that even after all this time in the UK, such devotion to the NHS, and even playing skittles for his quintessentially English village team, I’m afraid Russell still supports Australia in cricket and rugby. He fails the old ‘Tebbit’ test. He says, “Who wouldn’t?” and of course he is Australian, so why not?

Pro Vice-Chancellor, I present to you Russell Douglas Hamilton as eminently worthy of the degree of Doctor of Science, honoris causa.