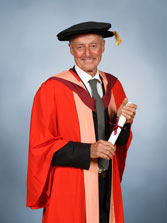 This afternoon’s first Honorary Graduand, Stephen Frankel, graduated in medicine from Oxford in 1970, and started his career as a district medical officer in Papua New Guinea. Combining clinical work with anthropology and epidemiology, he set about interrogating the distribution of, response to and beliefs about disease amongst his population.

These experiences formed the basis of his PhD in Social Anthropology from Cambridge and subsequent Doctorate in Epidemiology from Oxford. The resulting book, “The Huli Response to Illness”, demonstrated the limitations of both purely internal or solely external approaches to understanding complex social and biological realities. An admiring review in the British Medical Journal started “I wish I had written this book” and 31 years after publication it remains in press (and qualifies for Amazon Prime delivery).

Meeting him in 1986 I expressed the opinion that in my limited experience such posts represented an expensive way of keeping a grey suit in a vertical position. I quickly learnt that when Stephen was inside the suit it was more likely to be a racy ochre corduroy number (if such can be imagined). Furthermore Stephen showed it was possible to mildly subvert the discipline, through translating his groundbreaking earlier work to the very different setting of the British NHS. His central philosophy was the need to consider the (sometimes competing) rationalities of all actors in any situation, and to understand that these were all, indeed, in some sense, rational.

He continued to pursue this guiding principle on moving to Bristol in 1989 and becoming Professor and Head of the University’s Department of Social Medicine in 1993.

Here are just a few examples of Stephen’s ability to question taken for granted beliefs.

Patients are continuously blamed for wasting NHS resources by not turning up for appointments; Stephen identified that the main reason was in fact a failure of the invitation system.

Waiting lists are seen to be intractable; Stephen identified the true iceberg of need and the contribution of the perverse incentives held by some of those providing care.

We are constantly told there is an infinite demand for health care that the NHS can never meet; Stephen suggested we consider whether people really want ever increasing medical intervention and disruption of their lives, especially if provided with reliable evidence of potential benefits and harms?

During his time at the University, Stephen shepherded the Department of Social Medicine through a remarkable period of growth in reputation and size. He engendered a spirit of generosity and co-operation and through an assiduous process of recruitment and retention of home-grown talent the Department rose from the bottom to the top end of official league tables.

Stephen’s Directorship of NHS Research and Development in the South West, in which he engaged Russell Hamilton, our next honorary graduand, played a key role in this growth. Stephen’s successors as Head of Social Medicine, Jenny Donovan and Jonathan Sterne have both been committed to perpetuating the remarkable ethos established by Stephen. As we begin an exciting new era as Bristol Medical School next month, although sadly without the word “Social” in our name, we are confident that the Frankel legacy will remain very much alive.

After leaving the University in 2006 Stephen started another pioneering  phase of his life. Abandoning the metaphorical grey suit, he and Lizy-Jane restored a water mill and established a farm near Wadebridge in Cornwall. Here they introduced and promoted sustainable energy technologies and worked locally and nationally to make renewable energy a reality.  Wadebridge is now a beacon – of the non-carbon variety, naturally – in the sustainable energy field in the UK, and, as their website states, renewables now generate enough energy to make 314 million cups of tea a year.

Pro Vice-Chancellor, I present to you Stephen Frankel as eminently worthy of the degree of Doctor of Science, honoris causa.