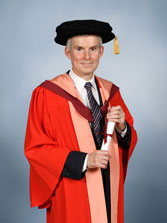 Cancer, the C word, is rarely a word any of us want to hear. Yet virtually all of us in this hall today will have personal experience of cancer at some stage in our lives, either directly or through a family member or friend. Cancer is a complex series of conditions for which really effective treatments have often been slow to emerge. Some of today’s graduates have spent their entire degrees focussing on the study of cancer. They will tell you that there is still so much to learn and know. Today’s honorary graduate has spent most of his career studying the root causes of cancer. Although his knowledge in this complex area is undoubtedly better than virtually all of us in this hall, he would be the first to admit we still don’t know enough.

David Barford initially studied Biochemistry here at the University of Bristol. He was an impressive and outstanding student. He graduated at the top of his year. David subsequently moved to the University of Oxford to undertake doctoral studies in structural biology with Professor Dame Louise Johnson, one of the pioneers of the emerging field of protein crystallography. David proved equally impressive to Louise and together they worked out some of the basics by which the cells from all species, including humans, use a common chemical process known as phosphorylation to switch activities on and off within cells. This is the basis of an incredibly complex switching network that is fundamental to cell replication, growth and – when things go wrong – cancer itself. The intricacies of this stunningly sophisticated signal network still challenge much bioscience research to this day. These networks are also of critical importance to many others, including computer scientists such as some of our graduates here today.

On completion of his DPhil studies at Oxford and having learnt the challenging technique of X-ray crystallography, David moved to Dundee and then to the renowned Cold Spring Harbor Laboratory in New York. In both these places he furthered his interest in the key enzymes that regulate this cellular switching system - protein phosphatases.

David then returned to the University of Oxford as a University Lecturer, but five years later was appointed as a Professor at The Institute of Cancer Research in London in 1999. Throughout this time, and until the present day, he has continued his research on understanding the fine details of how cells use complex molecular machines to switch on and switch off parts of their life cycle. If we want to control cancer, it is vital we decipher this basic programming. The intricacy of this system is truly amazing and its investigation has required the development of new methods of research. David’s work has often been at the forefront of technical developments that have opened up not just his own field of research, but benefitted countless others too.

It was at The Institute of Cancer Research where David laid the foundations of the work he is perhaps best known for today – namely to decipher the structure and mechanism of a key molecular machine in cancer genesis, known as the Anaphase Promoting Complex or APC/C.  APC/C is an incredibly complicated molecular machine, and a key checkpoint in tumour development. In this ground-breaking research, mainly conducted at the world-famous Laboratory of Molecular Biology at Cambridge where he is now based, David has elucidated the structural details of this hugely complex molecular assembly. This is key to understanding the mechanisms governing key processes by which cells divide. A project of this size would have been thought impossible not many years ago. Visualizing this conglomeration of many proteins is a key step to understanding cell division and the origins of cancer. At an atomic level, this is understanding the details of life itself.

Although David is so clearly simply motivated by intellectual interest and driven by applying that to our understanding of cancer, throughout his career he has almost inadvertently acquired many awards. These include the Colworth Medal in 1998 - one of the most prestigious recognitions for young scientists in the UK – and in 2003 he became both a Member of the European Molecular Biology Organisation and also a Fellow of the Academy of Medical Sciences. In 2006 he was elected a Fellow of the Royal Society. This is pretty much the ‘full house’ of prestigious awards that any outstanding scientist can hope to achieve over a lifetime. David completed all of this by the age of just forty-three.

However David is an inspiration to us all not just for his astonishing record of success in science, but also for his character. To talk with David is refreshing. He is incredibly modest, yet his focus and keenness to probe and to understand are immediately obvious. No challenge, even the most complex of networks, seems too difficult. And he has one of the most distinctive laughs in the business. To our graduates today David is a tremendous inspiration: enthusiasm and love of your field will get you everywhere.

Vice-Chancellor, I present to you Dr DavidBarford as eminently worthy of the degree of Doctor of Science honoris causa.