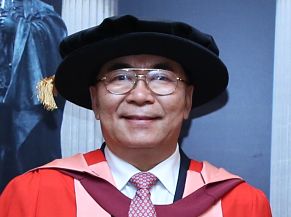 Often the world’s leading scientists try to achieve discoveries on a grand scale.  Professor Bai Chunli throughout his scientific career has decided to become a world leading authority by looking at the opposite end of the spectrum. In fact, for Professor Bai, the smaller the better.

Professor Bai’s academic credentials in nanoscience and nanotechnology are unquestionably world leading.  Highlights include developing China’s first atomic force microscopy and its first tunnelling microscope, achieving a global impact by being able to measure at low temperature in an ultra-high vacuum.  So rather than looking at structures on a grand scale, Professor Bai understood and was able to demonstrate to the world the ability to manipulate single atoms and molecules from his research laboratories in China.

He has used these techniques to study both organic and biological molecules on surfaces and is recognised globally through his papers and books.  In fact, it would be hard to find anyone more eminent in the field of nanoscience today.

I have started by listing these achievements before sharing with you how Professor Bai has reached the stature in his field we are recognising today.  Indeed, if you read Professor Bai’s Wikipedia entry, the aspirations in his early career were not high.  Professor Bai’s father, I quote, ‘was a primary school teacher who encouraged Bai to read’.

Fortunately for Professor Bai and the world of nanoscience, he moved on from this rather rapidly.  He graduated with a High School Certificate in 1970 and after school worked in the Inner Mongolia production and construction corps for four years.

At this point, his potential was recognised by his seniors and after examination, Bai Chunli was admitted to Peking University, graduating from the Department of Chemistry.  He continued his studies at the Chinese Academy of Science Institute of Chemistry and was awarded both Master’s and PhD degrees in short order.

Clearly this was only the start of a great career in science because on graduation from the Chinese Academy of Science, he joined the California Institute of Technology in the USA as a post-doctoral researcher, after which he rejoined the Academy in China.

Such was his aptitude both for fundamental science and for leadership, he has held many positions across the world, including visiting professorship at Tohoku University in Japan and not surprisingly, as he moved through the ranks of the Chinese Academy of Science, becoming its president in 2011.

Not content with providing scientific leadership for the whole of China, he also became the first Chinese president of the Academy of Sciences for the Developing World in 2012.  However, Professor Bai’s scientific leadership has also run in parallel with a commitment to nurturing the next generation of scientists, reflecting on the Chinese values and the potential of young people.

In his speech from the 25th Academy of Sciences for the Developing World meeting, he quoted Confucius on the topic of nurturing the next generation by saying, ‘A youth is to be regarded with respect.  How do we know that his or her future will not be equal to our present’, a message which should be appreciated by all our graduates in the room today.

Professor Bai’s commitment to Chinese scholars and their future is reflected in his own actions.  He has developed schemes for China to build a generation with the highest ambitions, again quoting directly, he wishes ‘to build a new generation of scientists to make a positive impact truly global’.

But Professor Bai Chunli’s commitment to science in China has spread beyond the country of China itself.  Indeed, he has held long-term collaborations with our own university through initiating, along with Professor Mervyn Miles and Professor Heinrich Hoerber in Bristol’s School of Physics, the organisation of the annual International Nanoscience Series in 1998, which has run successfully ever since.

Given Professor Bai’s own hectic schedule, it is testament to his commitment to his scientific discipline that I am reliably told that his last attendance at the International Scanning Probe Microscopy Conference in Mexico was achieved through a day trip from Beijing to Mexico City, returning to Beijing the same evening.  That is commitment for you, and a commitment that has been appreciated by Bristol scientists ever since.

We should also recognise Professor Bai’s having selected Bristol Nanoscience as one of the 25 centres globally to connect with the Chinese Academy of Science National Centre for Nanoscience and Nanotechnology, which led to nine of our nanoscientists working with the scientists at Tsinghua University at the China Nano Conference in 2013.  We hope and look forward to Professor Bai Chunli’s collaboration continuing despite his hectic schedule.

It is not surprising that Professor Bai has been recognised for his achievements across the globe.  I cannot list all of the awards that he has received, but some of the most significant are that he is a fellow of the National Academy of Sciences in the USA, Russia, Denmark, Germany, Australia, Pakistan and Mongolia and in 2014, became a foreign fellow of the UK’s Royal Society.  Just to note the significance of this award, I am reliably informed that the Royal Society turned down a Nobel Prize winner for foreign membership of its academy.  Clearly it thinks greater things of Professor Bai.

Thus we have before us a globally eminent scholar, who has shown inspirational leadership at the highest level, not only within China but recognised on all continents of the world.  At this point, it is worth pausing to recognise why we award honorary degrees, which is simply to reflect the values and aspirations of the University of Bristol.

I believe no one can demonstrate these values more than Professor Bai Chunli, who we are honoured to have with us today.  Therefore, Madame Chancellor, I present to you Professor Bai Chunli as eminently worthy of the title of Doctor of Sciences Honoris Causa.