Teaching of LGBTQ+ individuals from history

Llewellyn Jones, a History PGCE student at the School of Education, has written this news item about his teaching of LGBTQ+ individuals from history. Llewellyn has explored the rationale behind his selection of these individuals and his strategies for teaching about them in history lessons.

As a part of LGBT+ history month, staff at Gordano School in Portishead were asked to prepare profiles of LGBT+ historical figures, related to their subject, to show students at the beginning of lessons. How students engaged the information depended upon the class. To raise awareness of queer lives, some classes simply read the information and were asked if they had any questions. In other instances, these profiles could trigger discussion on how history is constructed, why some people have been left out, and even the importance of being mindful of how we talk about the past.

I saw this as an opportunity to move beyond the Wildes and Turings of LGBT+ history and raise the profile of a more diverse selection of historical figures. The story of the gay liberation movement certainly deserves attention but I wanted to broaden students’ awareness of queer lives throughout history. As some figures we looked at predated, or would not have used, labels like lesbian, gay, bisexual or transgender, 'queer’ is used here to refer to experiences that challenge heteronormativity and identity binaries.

A French photographer, sculptor and writer. Cahun lived outside of gender norms and lived with her female lover in Jersey. The pair led an active resistance to the Nazi occupation, distributing pamphlets against Nazism to soldiers. They were arrested multiple times and ultimately sentenced to death but were saved by the Allied invasion of Jersey in 1945.

With each example, I sought to highlight queer lives in periods that students were studying so that it bore relevance to the lesson. Claude Cahun is an extraordinary person to present to students, having rejected gender norms and resisted Nazi occupation. Not only is their story an inspiring one but it can enrich students’ awareness of the experiences of marginalised people under Nazi occupation by adding agency to their experiences. I was also mindful to not only describe each person solely by their queer experience as doing so can feel both reductive and dehumanising. (e.g. ‘The non-binary lesbian, Claude Cahun’). 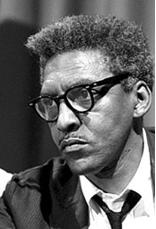 A close friend of Martin Luther King, Bayard helped to organise the March on Washington, where King gave his famous 'I have a dream' speech. He also did humanitarian work in Cambodia and Vietnam during the war, campaigned for Gay Rights and died in Haiti whilst on a humanitarian mission. In 2013, President Obama posthumously awarded him the Presidental Medla of Freedom.

Bayard Rustin is a prime example of a person that can be used to stimulate discussion on why certain people are remembered in history and not others. We can ask students why they think Rustin has not been included in narratives of the movement in the same way that other figures have. Hopefully, this can lead to an awareness of history being a product of the time it is produced. Figures like Rustin can also stretch students to consider the intersectionality of identity.

Osh-Tisch was a reknown warrior in Crow nation, her name translates to 'find them and kill them'. She was bate: the Crow word for someone assigned male at birth who is a woman. In Crow society, bate people were highly regarded as a bridge between two genders- being able to see both sides.

Queer representation in history and in fiction so often tells stories of trauma and oppression. These stories are worth telling but I, as a gay man, feel passionately about emphasising positive stories as well, so that the overarching message is not simply that queer lives equate to unhappy lives. For this reason, Osh-Tisch was the profile I was most excited to share with my students. I was inspired by the respect she had from the Crow nation as a warrior and as a baté. Of course, the Crow nation faced oppression at the hands of the white Americans but Osh-Tisch's story shows students that queer lives have not always operated in the margins of society.

Examples like Osh-Tisch, James I and Richard the Lionheart, also highlight the issue of inaccurately describing queer experiences by applying modern, European terms to these people who would not have used to describe themselves. Sensitivity to applying modern substantive concepts to the past is certainly a useful skill in history.

Visibility is at the core of LGBT+ history month. I encourage teachers, wherever possible, to raise the profile of LGBT+ people that relate to their subject to create a more inclusive classroom. This can also support discussions we already have in history: how historical narratives are constructed and influenced by the time they are produced, and how we choose language to more accurately describe the past. If you are unsure of where to start, Stonewall and makingqueerhistory.com have accessible information and resources for bringing LGBT+ history into the classroom.