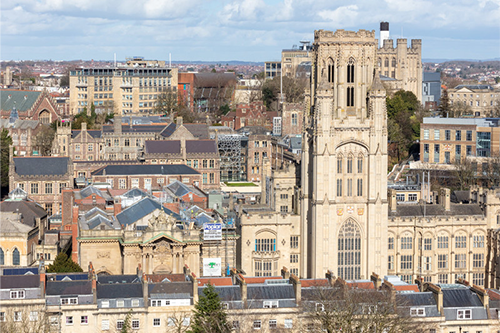 A view of the Wills Memorial Building, part of the University of Bristol

Courses at the University of Bristol are among the very best in the world, according to a global survey released today.

Forty subjects on offer at the University feature in the  QS World University Rankings by Subject, the world’s most consulted higher education league table.

The data reveals that of the 1,440 universities surveyed world-wide, 32 subjects at Bristol are in the top 100, while an impressive 11 made the top 50.

Veterinary Science came in at 13th in the world, while subjects such as Geology, Geophysics, Earth & Marine Sciences and Social Policy & Administration*, among others, featured in the top 50.

Professor Hugh Brady, Vice-Chancellor of the University of Bristol, said: “It is hugely rewarding that many of our courses have once again been named among the best in the world.

“After what has been a difficult year for many, every single University of Bristol professor, academic and student should be proud of this fantastic achievement.

“Without their hard-work, creative drive and boundless intelligence we would not be where we are today.”

The QS World University Rankings by Subject uses four data sources to assess each University’s standing: a survey of academics, a survey of employers, research impact (based on research citations per paper) and the ‘H-index’, which measures the productivity of published works.

Last June, the QS World Rankings placed Bristol as the ninth best University in the United Kingdom, the 14th best in Europe and the 58th best in the world.