Non-Destructive Testing (NDT) is critical for the operation of machinery used by the world’s most safety-critical engineering sectors, such as nuclear power and aerospace. The University of Bristol's research has helped extend the service life of valuable assets, boost revenue and improve safety.

The team, led by Professors Bruce Drinkwater and Paul Wilcox from the Department of Mechanical Engineering, has changed the way inspections can be carried out by developing a new generation of ultrasonic array technology for NDT. Industry applications of the technology are generating income, extending the life of structures and maximising safety.

Ultrasonic array technology was first introduced to engineering for NDT via the medical sector. Using this medical technology to ‘see’ inside the very fabric of a piece of equipment was a significant step forwards for plant and machine safety. However, engineering objects are very different to the human body and these early array systems did not maximise the true potential of array techniques. This fundamentally limited the resolution of the technique and the size of defects that could be seen.

This was becoming a serious issue for one of Canada’s largest electricity providers, Ontario Power Generation, whose need to map wall thickness around welds in several hundred feed-water pipes in their CANDU (CANadian Deuterium Uranium) reactors had become urgent. These components had complex 3D geometries, and with traditional NDT technology the inspection process was becoming prohibitively time consuming, costly and required high levels of human intervention.

“The sector urgently needed more advanced ultrasonic technology that could significantly improve image quality,” says Professor Drinkwater. “It also needed techniques which can adapt to the diversity of materials now present in engineered structures. But, at the heart of this challenge, is the drive to find smaller and smaller defects. We believed ultrasonic arrays would drive these improvements forward.”

Drinkwater first introduced the concept of using ultrasonic arrays within wheel probes in 2002. Previously such probes had used a single ultrasonic transducer to measure (e.g. thickness) at a single point on a structure. An ultrasonic array, housed within a wheel, is able to measure a far wider area as it is rolled over the structure.

Following this innovation the University’s UNDT (Ultrasonics and Non-Destructive Testing) Group became one of the six founding academic partners of the UK Research Centre in Non-Destructive Evaluation (RCNDE). The UNDT group continued its array work under the RCNDE core research programme and increased emphasis on array data acquisition and processing. Within a year, Drinkwater and Wilcox presented their ground breaking research. They focussed on a single, yet significant, advancement in array technology: Full Matrix Capture (FMC).

FMC simplified the process for firing array elements. This allowed for superior imaging and the potential to permanently store the data. Furthermore, the imaging technology used by FMC, Total Focusing Method (TFM), could work in diverse testing scenarios, such as those using anisotropic materials, which tended to severely reduce the quality of traditional images. Using this new approach, distortions due to anisotropy and transmission across material boundaries could be corrected automatically, dramatically simplifying the interpretation of the data.

From theory to commercial success

These developments have now been applied successfully to a number of major industries where safety and testing are critical.

Ontario Power Generation, for example, is now able to map the thickness of its feed water pipes efficiently and accurately. Inspections are quicker, and Ontario collects and evaluates data regularly to build a true picture of any deterioration within the equipment.

Multinational defence technology company QinetiQ has used the technology to extend the design life of military aircraft and estimates the benefit to the industry to be at least £10m per year. Rolls-Royce Aerospace, meanwhile, has used FMC / TFM to decrease blade failures in its aircraft’s engines. Prior to using arrays for its inspections, Rolls-Royce suffered about three engine failures per year, each costing £5m. Since introducing the technology, there have been none.

“There is little doubt that for major end-users of NDT research by Bristol is leading to reductions in inspection costs and creating many other benefits in terms of efficiency and revenue,” says Professor Wilcox. “In addition, we’ve helped to develop highly-skilled engineers who are now leading the industrial development of new array inspections based on underlying research performed at Bristol, ensuring the research will have a lasting commercial impact.” 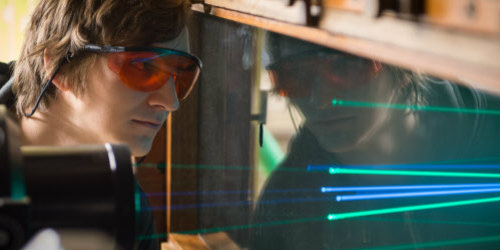 Work alongside industry to apply your research to real-world problems.