Investigating meaningful commonalities in how the different scientific disciplines tackle complexity and whether they can provide a reliable definition of a complex system.

Complexity sciences is a growing field and complex systems research is becoming ever more important in both the natural and social sciences. However, agreement on a concise definition of a complex system is yet to be found. Taking a critical perspective, a philosopher of science and a mathematician teamed up to ask, what is complexity, how can it be described, if at all, and what are the merits for its application.

For Bristol University’s James Ladyman, Professor of Philosophy in the School of Arts, part of the appeal lay in bringing rigour to an area of science that has been comparatively neglected as an area of study for philosophers of science. He considers whether a single definition of complexity is possible, or whether we have different kinds of complexity in different domains without there being a unified notion of a complex system across those domains.

Together with Dr Karoline Wiesner, Senior Lecturer in the School of Mathematics, Professor Ladyman examined the literature, theories and discussions that touch on the idea of complexity, collating a comprehensive body of material that had previously not been subjected to such rigorous analysis. Having a clearer definition of complexity could help inform the way the scientific community approaches its research, its experiments and mathematics, and help frame the questions it asks.

What is the definition of a complex system?

A system emerges organically as a result of the behaviours of the components within it, rather than because of a predetermined plan. Paradoxically then – and contrary to the traditional idea of defining a system with reference to its individual components – complexity defies definition on an element basis because no element is independent of the behaviour of the other elements.

“It boils down to something that consists of many elements that are interacting in a disordered way out of which is generated a robust order. There is nothing that controls centrally how things are supposed to behave." - Dr Karoline Weisner

Professor Ladyman illustrates the point using the analogy of a flock of birds flying towards a skyscraper, the flock will split and go around the skyscraper to merge and reform at the other end. There is no predetermined group plan to form as a flock, rather, each bird follows a simple set of rules that governs its own actions and consequently, the interactions between birds. The “flock-like behaviour” emerges as a result of those momentary interactions. The same idea applies to the systems of the internet, cells, the brain, the Universe, and virtually any other system with multiple interconnected components.

Professor Ladyman and Dr Weisner emphasise that their findings posit no absolutes: just like the systems they analyse and describe, their definition of complexity is subject to change. However, it is clear that connecting the fields of mathematics, physics, theory and description is an extremely interesting and satisfactory area of enquiry that requires a robust scientific approach. This research lays a significant marker in progressing our understanding of complexity theory and in suggesting further avenues for research. 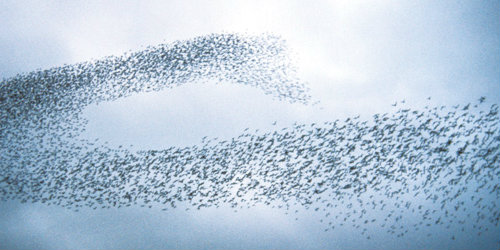