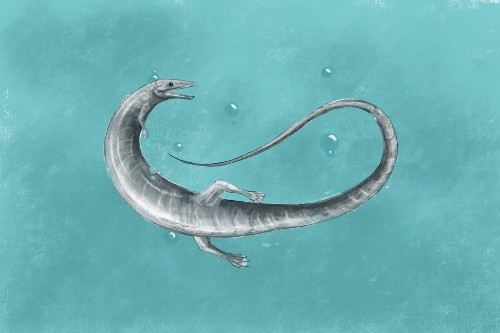 Pleurosaurus from the Late Jurassic, some 150 million years ago, of southern Germany, a remarkable, long-bodied swimming rhynchocephalian. 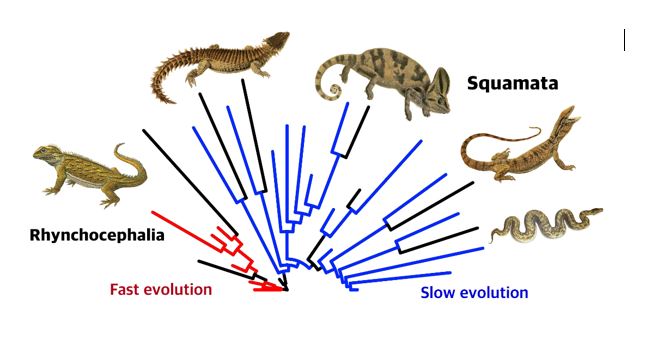 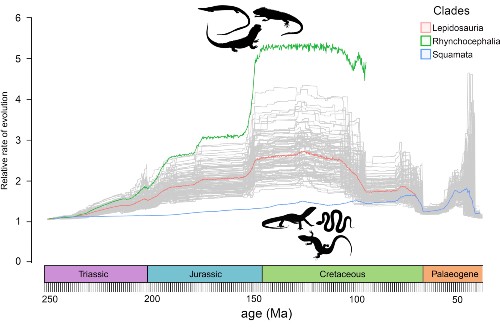 Rates of evolution for lizards and snakes (Squamata, blue line) were far lower than those for Rhynchocephalia (green line) for some 200 million years, and they only flipped in the last 50 million years or so. Armin Elsler

Researchers at the University of Bristol have found that fast evolution can lead to nowhere.

In a new study of lizards and their relatives, Dr Jorge Herrera-Flores of Bristol’s School of Earth Sciences and colleagues have discovered that ‘slow and steady wins the race’.

The team studied lizards, snakes and their relatives, a group called the Lepidosauria. Today there are more than 10,000 species of lepidosaurs, and much of their recent success is a result of fast evolution in favourable circumstances. But this was not always the case.

Mr Herrera-Flores explained: “Lepidosaurs originated 250 million years ago in the early Mesozoic Era, and they split into two major groups, the squamates on the one hand, leading to modern lizards and snakes, and the rhynchocephalians on the other, represented today by a single species, the tuatara of New Zealand. We expected to find slow evolution in rhynchocephalians, and fast evolution in squamates. But we found the opposite.”

“We looked at the rate of change in body size among these early reptiles,” said Dr Tom Stubbs, a collaborator. “We found that some groups of squamates evolved fast in the Mesozoic, especially those with specialised lifestyles like the marine mosasaurs. But rhynchocephalians were much more consistently fast-evolving.”

“In fact, their average rates of evolution were significantly faster than those for squamates, about twice the background rate of evolution, and we really did not expect this,” said Dr Armin Elsler, another collaborator. “In the later part of the Mesozoic all the modern groups of lizards and snakes originated and began to diversify, living side-by-side with the dinosaurs, but probably not engaging with them ecologically. These early lizards were feeding on bugs, worms, and plants, but they were mainly quite small.”

This work confirms a challenging proposal made by the famous palaeontologist George Gaylord Simpson in his 1944 book Tempo and Mode in Evolution. He looked at the fundamental patterns of evolution in a framework of Darwinian evolution and observed that many fast-evolving species belonged to unstable groups, which were potentially adapting to rapidly changing environments.

Prof Benton continued: “Slow and steady wins the race. In the classic Aesop’s fable, the speedy hare loses the race, whereas the slow-moving tortoise crosses the finishing line first. Since the days of Darwin, biologists have debated whether evolution is more like the hare or the tortoise. Is it the case that big groups of many species are the result of fast evolution over a short time or slow evolution over a long time?

“In some cases, they can stabilise and survive well, but in many cases the species go extinct as fast as new ones emerge, and they can go extinct, just like the napping hare. On the other hand, Simpson predicted that slowly evolving species might also be slow to go extinct, and could in the end be successful in the longer term, just like the slow-moving but persistent tortoise in the fable.”

‘Slow and fast evolutionary rates in the history of lepidosaurs’ by JA Herrera-Flores, A Elsler, TL Stubbs, MJ Benton in Palaeontology