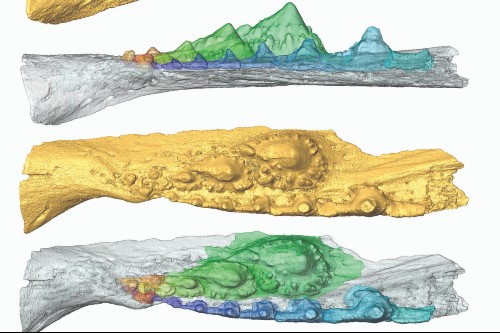 Side and oral views of a virtual model of the ischnacanthid acanthodian jaw showing the tooth-rows and reconstruction of the tooth replacement. Martin Rücklin, Naturalis Biodiversity Center

The origins of a pretty smile have long been sought in the fearsome jaws of living sharks which have been considered living fossils reflecting the ancestral condition for vertebrate tooth development and inference of its evolution. However, this view ignores real fossils which more accurately reflect the nature of ancient ancestors.

New research led by the University of Bristol and the Naturalis Biodiversity Center published in Nature Ecology and Evolution reveals that the dentitions of living shark relatives are entirely unrepresentative of the last shared ancestor of jawed vertebrates.

The study reveals that while teeth evolved once, complex dentitions have been gained and lost many times in evolutionary history and tooth replacement in living sharks is not the best model in the search for therapeutic solutions to human dental pathologies.

Lead author Martin Rücklin from Naturalis Biodiversity Center in The Netherlands said: “We used high energy x-rays at the TOMCAT beamline of the Swiss Light Source at the Paul Scherrer Institut in Switzerland, to study tooth and jaw structure and development among shark ancestors. These ischnacanthid acanthodians possessed marginal dentitions composed of multiple, successional tooth rows, that are quite unlike the tooth whorls that occur in front of the jaw in acanthodians and across the jaws of crown-chondrichthyans.”

Co-author Professor Philip Donoghue from the University of Bristol’s School of Earth Sciences said: “Dentitions of vertebrates are characterized by an organised arrangement to enable occlusion and efficient feeding over the lifetime of an animal. This organisation and pattering of teeth is thought to originate in a universal development mechanism, the dental lamina, seen in sharks. The condition we see in the successional tooth rows cannot be explained by this mechanism.”

Co-author Benedict King from Naturalis Biodiversity Center said: “Using state of the art probabilistic ancestral state estimation methods, we build on this discovery to show that teeth existed in the crown-ancestor of gnathostomes, whereas complex dentitions, tooth whorls, a dental lamina and coordinated replacement, have all evolved independently and been lost several times in the early evolution of jawed vertebrates.”