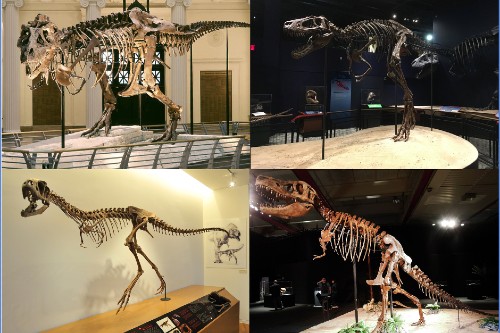 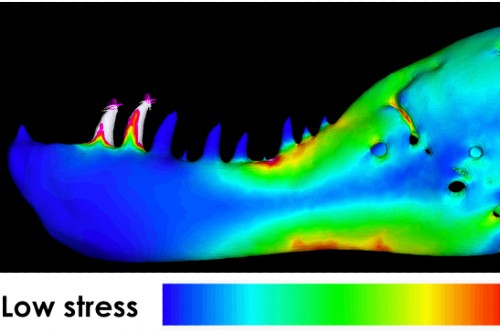 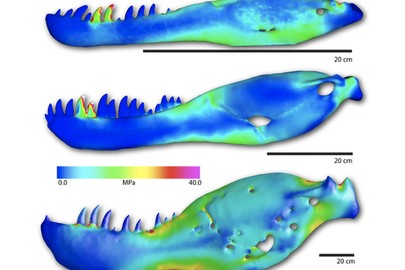 By closely examining the jaw mechanics of juvenile and adult tyrannosaurids, some of the fiercest dinosaurs to inhabit earth, scientists led by the University of Bristol have uncovered differences in how they bit into their prey.

They found that younger tyrannosaurs were incapable of delivering the bone-crunching bite that is often synonymous with the Tyrannosaurus Rex and that adult specimens were far better equipped for tearing out chunks of flesh and bone with their massive, deeply set jaws.

The team also found that tension from the insertion of the lower pterygoid muscle is linked to decreasing stresses near the front of the typical tyrannosaur jaw, where the animals may have applied their highest impact bite forces using their large, conical teeth.

Adult tyrannosaurids have been extensively studied due to the availability of relatively complete specimens that have been CT scanned.

The availability of this material has allowed for studies of their feeding mechanics. The adult Tyrannosaurus Rex was capable of a 60,000 Newton bite (for comparison, an adult lion averages 1,300 Newtons) and there is evidence of it having actively preyed on large, herbivorous dinosaurs.

The team were interested in inferring more about the feeding mechanics and implications for juvenile tyrannosaurs.

At actual size the juveniles experienced lower absolute stresses when compared to the adult, contradicting our first hypothesis. This means that in real life, adult tyrannosaurs would experience high absolute stresses during feeding but shrug it off due to its immense size. However, when mandible lengths are equalized, the juvenile specimens experienced greater stresses, due to the relatively lower bite forces typical in slender jaws.

Lead author Andre Rowe, a Geology PhD Student at the University of Bristol’s School of Earth Sciences, said: “Tyrannosaurids were active predators and their prey likely varied based on their developmental stage.

“Based on biomechanical data, we presume that they pursued smaller prey and fulfilled an environmental role similar to the ‘raptor’ dinosaurs such as the dromaeosaurs. Adult tyrannosaurs were likely subduing large dinosaurs such as the duckbilled hadrosaurs and Triceratops, which would be quickly killed by their bone-crunching bite.

“This study illustrates the importance of 3D modeling and computational studies in vertebrate paleontology - the methodology we used in our study can be applied to many different groups of extinct animals so that we can better understand how they adapted to their respective environments.”

There are two major components of this research that Andre and the team would like to see future researchers delve into continued CT and surface scanning of dinosaur cranial material and more application of 3D models in dinosaur biomechanics research.

Andre added: “There remains a plethora of unearthed dinosaur material that has not been utilized in studies of feeding and function - ideally, all of our existing specimens will one day be scanned and made widely available online to researchers everywhere.

“The current lack of 3D model availability is noticeable in dinosaur research; relatively few studies involving 3D models of carnivorous dinosaurs have been published thus far. There is still much work to be done concerning skull function in all extinct animals - not only dinosaurs.”

‘Biomechanics of juvenile tyrannosaurid mandibles and their implications for bite force’ by A. Rowe and E. Snively in The Anatomical Record

The Anatomical Record: Advances in Integrative Anatomy and Evolutionary Biology, an official publication of the American Association for Anatomy, publishes new discoveries in the morphological aspects of molecular, cellular, systems, and evolutionary biology.