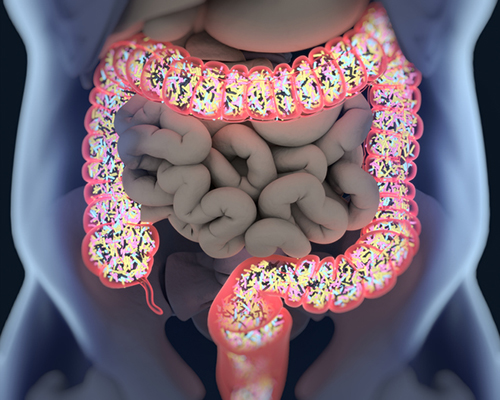 Illustration of gut bacteria inside the large intestine

Human genes have an impact on shaping our gut ecosystem according to new evidence from the international MIBioGen consortium study involving more than 18,000 people. The findings, led by the University Medical Center Groningen, Netherlands and involving researchers at the University of Bristol, are published today [18 January] in Nature Genetics.

The last decade has substantially broadened our knowledge of the human microbiome, the microbial ecosystem that inhabit the internal and external surfaces of our bodies. The trillions of microbes living with us are not just passengers ‒ they actively participate in many human functions, helping us to digest food, training our immune system and even affecting our mood via the gut-brain axis.

The largest and richest human microbiome inhabits the gut and contributes substantially to our health. Yet the factors that shape its composition, although widely studied, remain unclear, and the more than 80 per cent difference in gut microbiome between individuals remains unexplained. In general, environmental factors such as diet and medication play a major role, however a role for human genetic variants has also been suggested by the identification of heritable bacteria, i.e. those that are more common in twins and family members.

Now, a new study from the MiBioGen consortium, a collaboration involving more than 20 labs across the world, highlights the common host genetic factors which influence the composition of the human gut microbiome in more than 18,000 people analysed. They report that at least two human genes have a major impact in shaping our gut ecosystem: the lactase gene (LCT), which influences the abundance of lactose-digesting Bifidobacteria, and the fucosyl transferase (FUT2) gene, which determines the abundance of Ruminococcus torques. They also show that other human genes affecting microbiome composition are involved in important aspects of host metabolism, nutrition and immunity. Their analyses stretch as far as establishing relationships between several bacterial species and human diseases. For example, a higher abundance of Bifidobacterium decreased the risk of the inflammatory bowel disease ulcerative colitis, an observation also reported in previous clinical trials.

“This study is a great example of a large international collaboration and is the first to accurately estimate the effect of host genetics on the gut microbiome,” explained Alexandra Zhernakova, one of the principal investigators leading the consortium. “More genetic effects will likely be identified with increased sample size in future studies, but our multi-centre approach did identify robust loci that are shared across populations. However, further studies in large and more homogenous groups are essential to identify population-specific effects and gene-environmental interactions.”

“It was a challenge to combine datasets from multiple cohorts due to the large technical differences and to biological variations across populations. However, this diversity also brings strength – for example, we could see that genetic variants in the lactase gene determine Bifidobacteria abundance in adults, but not in children, and that this effect is more pronounced in European populations,” says Alex Kurilshikov, the first author of the study. “The large sample size also allowed us to apply genetic methods and show that some bacteria are causal for developing diseases.”

Dr Kaitlin Wade, Lecturer in Epidemiology at Bristol Medical School and one of the study’s authors, added: "Ever increasing genome-wide association studies and consortia, such as MiBioGen, provide greater opportunities to understand host genetic contributions to variation in the human gut microbiome. There is also promise in efforts to interrogate the causal role played by the gut microbiome in human health using methods such as Mendelian randomization. Estimating causal effects remains a complicated process; however, when evidence from studies like this corroborate that obtained with other epidemiological studies, our confidence in how the gut microbiome may be used to prevent or treat disease will improve.”

The MiBioGen researchers have made their results available to other scientists and the scientific community for additional and future analyses. All results are uploaded to http://mibiogen.org, supported by the Genomics Coordination Center in the Department of Genetics, UMCG.