Blue-green algae key to unlocking secrets of ancient past 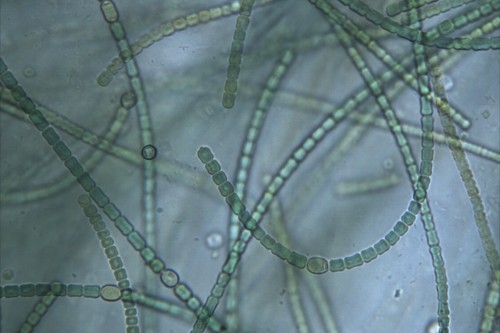 The blue green algae, which is responsible for seeping oxygen into the Earth’s atmosphere, changing the planet forever, diversified from its relatives to cope with the rise of the gas.

To understand how oxygen shaped early life, scientists at the University of Bristol have been investigating when cyanobacteria evolved and when they began using antioxidants called superoxide dismutase enzymes (SODs) to manage reactive oxygen.

They devised a ‘molecular clock’ using geochemical records, cyanobacteria fossils and genetic information to create a timeline of events.

Around 2500 million years ago, young Earth was unrecognisable. No ozone layer existed and there was no oxygen to breathe in the atmosphere. Instead, the planet was dominated by microbes. Cyanobacteria are the only bacteria capable of oxygenic photosynthesis, a process also used by plants to convert carbon dioxide into oxygen using sunlight. Today, cyanobacteria are widespread throughout the ocean, but then they were mostly restricted to freshwater and land.

Oxygen is highly reactive and toxic. Cyanobacteria uses SODs to protect against e these effects which all have different evolutionary origins - and use different trace metals.

Group leader author of the paper Dr Patricia Sanchez-Baracaldo of Bristol’s School of Geographical Sciences said: “We studied the evolutionary history of four of these antioxidant enzymes: NiSOD, CuZnSOD and Fe- and Mn-utilising SODs. Such SODs are found in everything from animals to plants and bacteria, where they manage ROS by converting superoxide free radicals into hydrogen peroxide.

PhD student, Joanne Boden said: “We discovered that cyanobacteria had acquired their SOD genes from other bacteria on several occasions throughout history. As a result, different strains used different antioxidant enzymes depending on their circumstances. For example, cyanobacteria which live planktonic lifestyles, floating in the ocean, often use NiSOD. Whereas most cyanobacteria, regardless of their habitat, use Mn- or Fe-SODs.

“The evolutionary trajectory of a different SOD, using copper and zinc cofactors instead of nickel matched those of older, more ancestral cyanobacteria which diversified at least 2,700 million years ago. This suggests that oxygen-producing bacteria were equipped with mechanisms of managing ROS before the global atmosphere was flooded with oxygen.”

This genomic record, which has been published in Nature Communications, contains vital information about ancient habitats and proves the existence of life on land and in the ocean at that time.

Dr Sanchez-Baracaldo said: “Cyanobacteria worked out early in their evolution how to protect themselves against the side effects of oxygen.

"Our analyses of metalloenzymes dealing with reactive oxygen species (ROS) show that marine geochemical records alone may not predict patterns of metal usage by living organisms found in other environments such as freshwater and terrestrial habitats.”

The team now plan to investigate when other antioxidants evolved.