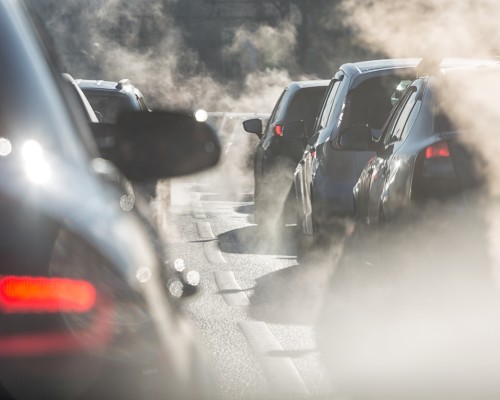 Exposure to traffic-related air pollution is associated with increased mental health service-use among people recently diagnosed with psychotic and mood disorders such as schizophrenia and depression, a study on data from over 13,000 people has found.

Increased use of mental health services reflects mental illness severity, suggesting that initiatives to lessen air pollution could improve outcomes for those with these disorders and reduce costs of the healthcare needed to support them.

The research was published in the British Journal of Psychiatry and funded by the National Institute for Health Research (NIHR) Maudsley Biomedical Research Centre.

In 2019 119,000 people lived with illegal levels of polluted air in London. Previous research has found that adults exposed to high levels of traffic-related air pollution are more likely to experience common mental health disorders such as anxiety and mild depression but, until now, little was known about whether air pollution exposure contributes to the course and severity after the onset of more serious mental illness.

Anonymised electronic mental health records were linked with quarterly average modelled concentrations of air pollutants (20x20 metre grid points) at the residential address of the participants. These included nitrogen dioxide and nitrogen oxides (NO2 and NOx) and fine and coarse particulate matter (PM2.5 and PM10).

The researchers found that for every 3 micrograms per cubic meter increase in very small particulate matter (PM2.5) and 15 micrograms per cubic meter increase in nitrogen dioxide (NO2) over a one-year period there was an increased risk of having an inpatient stay of 11 per cent and 18 per cent. Results also showed increases in PM2.5 and NO2 were associated with a 7 per cent and 32 per cent increased risk of requiring community-based mental healthcare for the same period. These findings were also replicated over a seven-year period.

Dr Ioannis Bakolis, Senior Lecturer in Biostatistics and Epidemiology at the Institute of Psychiatry, Psychology & Neuroscience (IoPPN) King’s College London and lead author of the study, said: ‘There is already evidence linking air pollution to the incidence of mental disorders, but our novel findings suggest that air pollution could also play a role in the severity of mental disorders for people with pre-existing mental health conditions.’

He continued: ‘Our research indicates that air pollution is a major risk factor for increased severity of mental disorders. It is also a risk factor that is easily modifiable which suggests more public health initiatives to reduce exposure such as low emission zones could improve mental health outcomes as well as reduce the high healthcare costs caused by long-term chronic mental illness.’

According to the researchers, if the UK urban population’s exposure to PM2.5 was reduced by just a few units to the World Health Organisation’s recommended annual limit (10 micrograms per cubic metre), this would reduce usage of mental health services by around two per cent, thereby saving tens of millions of pounds each year in associated healthcare costs.

Dr Joanne Newbury, Sir Henry Wellcome Research Fellow, Bristol Medical School (PHS), and the study’s first author, added: ‘We observed these findings for both mood disorders and psychotic disorders, as well as for both inpatient and community-based mental healthcare, and over seven years follow-up. This suggests that air pollution may contribute to a broad range of mental health problems, across a wide spectrum of clinical need, and over long periods of time.

‘We now plan to examine whether air pollution is associated with a broader range of mental health, neurodevelopmental, and educational outcomes, particularly among children, who might be especially vulnerable to air pollution.’

The researchers controlled the analyses for a number of potential variables that could influence the association between air pollution and service-use association, such as deprivation, population density, age, season, marital status and ethnicity. However, they cautioned that the study does not prove cause and effect, and further research needs to demonstrate exactly how air pollution might increase severity of mental health problems.

Dr Adrian James, President of the Royal College of Psychiatrists, said: ‘The environmental and climate emergency is also a mental health emergency. Our health is fundamentally linked to the quality of our environment, whether that's about cleaner air, access to green spaces or protection from extreme weather.

‘If air pollution is exacerbating pre-existing serious mental illnesses, such as schizophrenia, bipolar disorder and major depression, then improving air quality could reduce the pressure on mental health services. As we look ahead to our post-pandemic future, it is vital that we find ways to build back greener and prevent poor health. This important research presents a clear example where these go hand-in-hand.’

‘Association between air pollution exposure and mental health service use among individuals with first presentations of psychotic and mood disorders: retrospective cohort study’ published in the British Journal of Psychiatry.