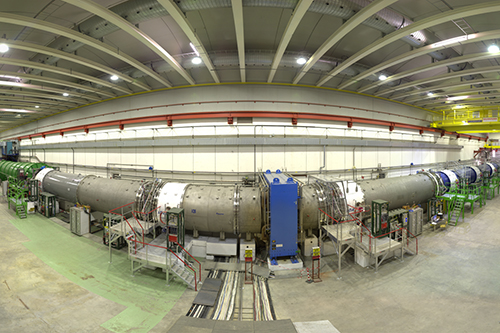 The NA62 experiment is 270 metres long and includes a 120-metre-long vacuum tank, shown here, housing several of the particle detectors. (Note: the experiment axis is a straight line, the curving of the tank is an optical effect of the photo.) CERN

Scientists at CERN have reported on their first significant evidence for a process predicted by theory, paving the way for searches for evidence of new physics in particle processes that could explain dark matter and other mysteries of the universe.

The CERN NA62 collaboration, which is part-funded by the UK's Science and Technology Facilities Council (STFC) and involves scientists from the University of Bristol, presented at the ICHEP 2020 conference in Prague the first significant experimental evidence for the ultra-rare decay of the charged kaon into a charged pion and two neutrinos.

The decay process is important in cutting-edge physics research because it is so sensitive to deviations from theoretical predictions. This means that it is one of the most interesting things to observe for physicists looking for evidence to supports alternative theoretical model in particle physics.

The UK participants in this research are from the Universities of Birmingham, Bristol, Glasgow and Lancaster, and have been funded by STFC which is part of UK Research and Innovation, as well as by the Royal Society and the European Research Council (ERC).

Scientists from Bristol had responsibility for developing the control system for the KTAG part of the experiment, which selects the kaon particles from the incoming high intensity beam so that the decay can be observed.

Dr Helen Heath, from the School of Physics at the University of Bristol, worked with PhD student Stoyan Trilov on the research.

She said: "This is an exciting time for the NA62 experiment as we have now made the most precise measurement ever of this ultra-rare process."

Professor Mark Thomson, particle physicist and Executive Chair of STFC, said that this was exciting progress because the result shows how precise measurements of this process could lead to new physics, beyond the Standard Model of particle physics developed in the 1970s.

"Physicists have been searching for theoretical extensions to the Standard Model. Measurements of ultra-rare processes provide an exciting avenue for exploring these possibilities, with the hope of discovering new physics beyond the Standard Model."

The NA62 experiment has been designed and constructed, with a significant UK contribution, specifically for measurement of these ultra-rare kaon decays, from kaons produced by a unique high-intensity proton beam provided by the CERN accelerator complex.

The kaons are created by colliding high-energy protons from CERN's Super Proton Synchrotron (SPS) into a stationary beryllium target. This creates a beam of secondary particles which contains and propagates almost one billion particles per second, about 6 per cent of which are kaons. The main aim of NA62 is to measure precisely how the charged kaon particle decays into a pion and a neutrino-antineutrino pair. The UK has a strong leading role in the K+®p+nn decay analysis.

The new result measured to a 30 per cent precision, gives the most precise measurement to date of this process. The result is consistent with the Standard Model expectation, but still leaves room for the existence of new particles.

More data is needed to reach a definitive conclusion on the presence or not of new physics.

The data used in the research was taken between 2016 and 2018 at the CERN's Prevessin site, in France, and the research involves over 200 scientists from 31 institutions. A new period of data taking will start in 2021 and will allow the NA62 collaboration to put a more definite answer on the question of new physics.