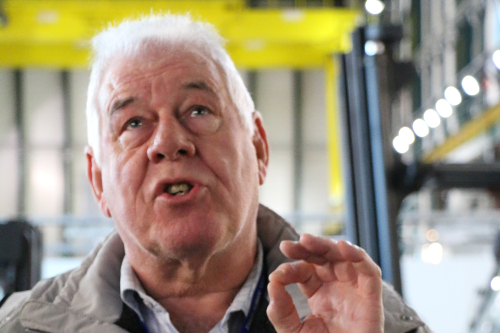 Dr Vincent Smith has received the Institute of Physics Phillips Award 2020 for his outstanding contributions to the Institute, and for other work promoting physics, including outreach to schools.

Dr Smith, an Honorary Senior Research Fellow in the School of Physics, has spent 40 years at Bristol, and has conducted research in elementary particle physics, taking part in projects at CERN and Fermilab and serving as a member of the team that discovered the Higgs Boson. In 2004 he was awarded an MBE for services to physics.

His outreach work on behalf of the Institute includes many school visits, during which he has delivered talks such as ‘What Time is it on Mars?’, ‘Dark Matter’ and ‘Is the Electron there when you are not looking?’.

Dr Smith has been a Member of the Institute of Physics since 1988 and a Fellow since 2002. During that time, he has supported the activities of the Institute in a number of ways: he served on the committee of the South-West Branch as member, Secretary, Treasurer and Chair from 2001 to 2005. As Chair, he introduced the Festival of Physics, which brings together speakers, workshops and demonstrations in a full-day event in Bristol or Bath in the spring, and in Exeter or Plymouth in the autumn. He rejoined the South-West Branch committee as Treasurer from 2016 to 2018 and as Chair in 2018. He was also appointed to the Nations and Regions committee, serving as Chair from 2006 to 2008. He served on the Institute’s Council from 2004 to 2008, and on its Education and Public Affairs Board from 2002 to 2004.

He served on the Nuclear and Particle Physics Division committee, as Secretary, then as Chair from 2005 to 2009, and was elected to the committee of the History of Physics Group, serving as Secretary and now Treasurer. He has organised conferences for the International Year of Light (June 2015), and on the history of particle colliders (April 2017). He is presently co-organising a meeting on the 200th anniversary of Hans Christian Oersted’s discovery of the connection between electricity and magnetism.

Vincent frequently visits CERN, acting as a Shift Leader on the CMS experiment; as a trained CERN guide, he also takes school and other groups on guided tours. He visits the University of Jaffna in Sri Lanka every two years to give unpaid undergraduate lectures on Advanced Electromagnetism.