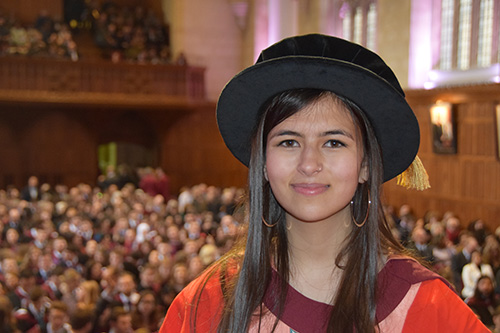 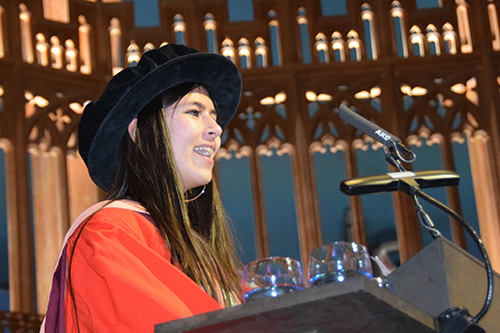 A 17-year-old birder, conservationist and environmental campaigner became the youngest British person to be awarded an honorary degree today [20 February].

Mya-Rose Craig, from Compton Martin near Bristol, was honoured by the University of Bristol for her activism and pioneering work, which includes campaigning for greater ethnic diversity in nature, conservation, environment and wildlife filmmaking.

The sixth-former, yet to sit her A-Levels, is British Bangladeshi and set-up Black2Nature, with the aim of giving Visible Minority Ethnic (VME) communities' equal access to the natural environment, especially as their involvement in environmental action is 'essential for saving our planet'.

Mya-Rose, who blogs as Birdgirl, is the youngest person in the world to see half of the world's bird species – a passion which started at a young age and which has prompted an unprecedented love of nature.

She filmed her first documentary at the age of seven, organised her first nature camp for VME inner-city Bristol teenagers and Race Equality in Nature Conference at 13, having now organised nine camps and two Conferences. In September 2018 she wrote the 'Manifesto for Diversity in Nature Conservation' for naturalist Chris Packham.

Mya-Rose said: "This originally felt so unbelievable that when I first got the email it felt like some strange sort of scam.

"I felt so emotional hearing that I had been nominated with such famous people and realising that my message must be getting through."

In her acceptance speech Mya-Rose called for greater equality of opportunities for everyone, regardless of their background.

She said: "Slowly change is happening, but it needs to happen much faster because we need to engage everybody from every community to tackle the environmental crisis that we are finding ourselves in.

"Now, more than ever, it's important to recognise that inequality in engagement creates inequality of opportunity. And an unequal world can never be a sustainable world."

Mya-Rose was nominated for the Doctor of Science honorary degree by Professor Rich Pancost, Head of Earth Sciences at the University of Bristol.

He said: "Although only 17, Mya-Rose has already created a phenomenal amount of positive change for nature and is a fantastic role model for her peers.

"In addition to being a world-leading ornithologist, she has delivered over 50 inspirational talks and is a passionate advocate for the need to engage people of all ages and backgrounds in both the conservation and the climate change movements.

"We are proud of her links to Bristol and delighted to present her with an honorary degree."