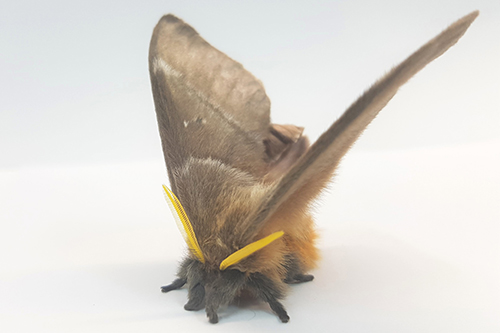 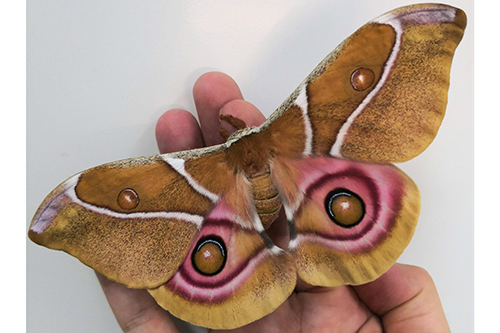 One of the four species used in the present study (Antherina suraka). The thorax scales on this moth can absorb up to 85 per cent of the sound energy produced by an echolocating bat Thomas R Neil 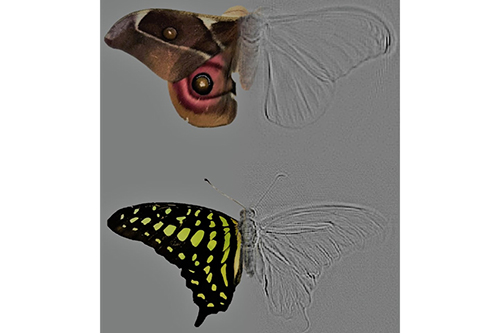 A composite image of a moth and a butterfly showing how we can use acoustic tomography to create a picture using sound. The colour images show the target species whilst the grey scale is the resultant tomographic image. This technique allows us to measure exactly how much sound is being reflected from certain body parts of a specimen Thomas R Neil and Marc W Holderied

Some species of deaf moths can absorb as much as 85 per cent of the incoming sound energy from predatory bats — who use echolocation to detect them. The findings, published in Royal Society Interface today [26 February], reveal the moths, who are unable to hear the ultrasonic calls of bats, have evolved this clever defensive strategy to help it survive.

Bats hunt at night using echolocation. The technique, which is also known as biological sonar, first evolved around 65 million years ago and enables bats to search for and find prey putting huge predation pressure on nocturnal insects. One defence that many nocturnal insects evolved is the ability to hear the ultrasonic calls of bats, which allows them to actively evade approaching bats.

Many moth species, however, cannot hear. The team of researchers from the University of Bristol wanted to investigate the alternative defences against bats that some species of deaf moths might have evolved.

Using scanning electron microscopy, the team from Bristol’s School of Biological Sciences discovered that the thorax scales of the moths Antherina suraka and Callosamia promethea looked structurally similar to fibres that are used as noise insulation, so wanted to explore whether the thorax scales of moths might be acting in some way to absorb the ultrasonic clicks of bats and dampen the echoes returning to the bat, offering the moths a type of acoustic camouflage.

The team measured that the scales on the body of a moth absorb as much as 85 per cent of the incoming sound energy and that the scales can reduce the distance a bat would be able to detect a moth by almost 25 per cent, potentially offering the moth a significant increase in its survival chances.

Dr Thomas Neil, Research Associate from Bristol's School of Biological Sciences and lead author, said: "We were amazed to see that these extraordinary insects were able to achieve the same levels of sound absorption as commercially available technical sound absorbers, whilst at the same time being much thinner and lighter.

"We are now looking at ways in which we can use these biological systems to inspire new solutions to sound insulating technology and analyse the scaling on a moth's wing to explore whether they too have sound absorbing properties."