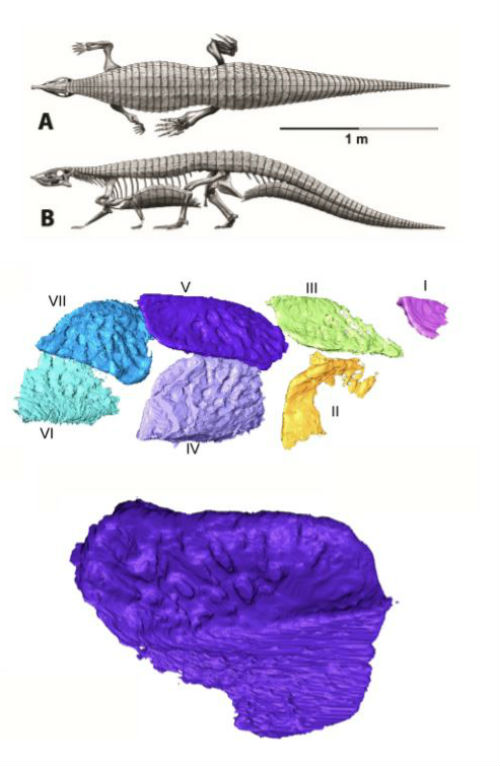 Skeleton of Stagonolepis, the Scottish aetosaur, by Jeffrey Martz (after work by Alick Walker) and reconstructed segment of the tail armour and a single osteoderm in more detail Emily Keeble

The aetosaurs were heavily armoured reptiles that lived in many parts of the world in the Triassic period, some 225 million years ago. For the first time, a student at the University of Bristol has CT scanned a specimen to understand how the armour worked.

Emily Keeble, a recent graduate from the palaeobiology programme at the University, did the work as a summer internship with Professor Mike Benton from Bristol’s School of Earth Sciences.

The specimens had been collected in 2018 in a sandstone quarry near Elgin in north-east Scotland by David Longstaff, who donated them to Elgin Museum, where Janet Trythall and Alison Wright were able to identify what they had and arrange for the scanning in Bristol.

Professor Benton said: “Aetosaurs were first identified from an Elgin specimen in 1844, but at that time people thought they had found a giant fish.

“The first specimen showed a number of rectangular scales, arranged in a closely overlapping, regular pattern, and it was called Stagonolepis, meaning ‘drop-shaped scale’.”

Emily Keeble added: “These droplet patterns could be seen in the new scans. If the scan resolution is high enough, you can see all the surface details and textures of the bones and armour plates.

“What had been identified as giant fish scales are actually armour plates, or osteoderms, made of plates of bone and embedded in the skin, just like in modern crocodiles.”

Two specimens were scanned, both from the tail region, and possibly from the same animal, but they do not fit together.

Each shows a complete circle of osteoderms around the tail, two above, two on each side, and two below.

The rows of osteoderms are very regular, and in life covered the entire body from the back of the head, over the neck, back and tail, and round the sides, and underneath. There were even small osteoderms over the fleshy parts of the arms and legs.

Aetosaurs were herbivores. They had long, heavy bodies, like modern crocodiles, but their skulls were short and their teeth small and leaf shaped. They also had snub noses, and it’s thought they dug up roots using their hands and snouts.

Their armour wrapped around completely and was a defence against predators such as rauisuchians and ornithosuchids, which had ferocious steak-knife teeth as large as a human finger.

Emily Keeble added: “Vertebrae of the tail are preserved inside the ring of osteoderms, and these show the specimens were only slightly squished during the preservation process.

“We could also see how the osteoderms overlap like roof tiles, the osteoderm in front slightly overlapping the one behind.

“They were linked with connective tissue so the armour overall was flexible, but tough and could probably protect the animal from the fierce predators of its day.”

‘Three-dimensional tomographic study of dermal armour from the tail of the Triassic aetosaur Stagonolepis robertsoni’ by E. Keeble and M. Benton in Scottish Journal of Geology