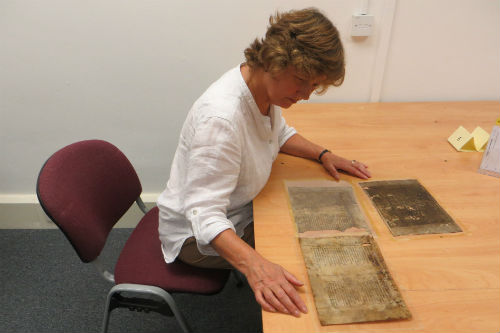 Professor Ailes with the manuscript University of Bristol

An academic from the University of Bristol has identified a rare medieval manuscript in Dundee City Archives.

The identification came about by a happy coincidence of circumstances when Dr Julian Luxford of St Andrews University came across the fragments when working in the archive.

Professor Ailes and her husband were on holiday in St Andrews and met up with Dr Luxford socially when he asked her if she was able to identify them. They turned out to be from a text she had worked on extensively and which had in fact been the subject of her PhD thesis.

Fierabras is a French epic poem about the legendary emperor Charlemagne, who ruled over large parts of Western Europe in the early ninth century.

Although only six manuscripts and five fragments survive, the narrative spread across Europe and was translated into many languages, including Middle English and early Irish.

Fierabras is a Saracen prince who decides to convert to Christianity and helps Charlemagne defeat his own father. It has all the elements of a good story: sex and violence, romance and religion.

The romance comes through Fierabras’ sister, a beautiful princess who falls in love with one of the Christian knights, one of a group held prisoner by her father; she does all she can to win her man, including braining the gaoler responsible for the Christian prisoners, setting the free and arming them, and defenestrating her governess who threatens to tell her father what she is doing.

The fragments found in Dundee include an episode where one of the Christian knights escapes to take a messenger to Charlemagne and a miracle occurs. Faced with a raging torrent of a river the messenger, Richard of Normandy, prays to God for help; God sends a white deer to guide him safely across the river.

Professor Ailes, who is based in the Department of French and is Co-Director of the University’s Centre for Medieval Studies, said: “No two copies of a text in manuscript are ever identical so each new find adds another piece to a jigsaw which helps us understand how a text was read and re-interpreted in the Middle Ages.

“It is difficult to be certain about the significance of these fragments until more research has been done but a preliminary examination suggests that some episodes may have been in a different order in this copy of the text.”

The fragments had been glued together to make a binding for a sixteenth-century protocol book, a legal record common in medieval and early modern Scotland.

This is not the first time Professor Ailes has been able to identify fragments of Old French text. She recently identified a double sheet in the Worcester Record Office as the popular thirteenth-century allegorical romance the Roman de la Rose.

Professor Ailes added: “It is very unusual for medievalists to have the chance to identify one medieval fragment of this sort let alone two in a short space of time.

“Such fragments tend to be recovered from legal and similar documents and held in the kind of archives literary scholars will rarely need to consult.”

Both these recent finds have been the result of academics in other disciplines asking Professor Ailes to identify something they had come across.